One of the more interesting stories I wrote in my first few years of newspapering was the account of a Mandeville resident who was building a boat in his back yard, not a small boat, but a rather large boat. He was planning to launch it, climb on board, and take off sailing the seven seas and island-hopping wherever the winds may take him. Many men have that exact same dream, but not everyone has the skills, tools, materials and space to actually do it. Here is his story.
Louis Vial Builds A Boat By Ron Barthet
Published June 9, 1974

Deep within the Chinchuba woods, Louis Vial is building a boat. The craft will be fifty feet long and, when completed, will weigh in the neighborhood of 35 tons. He plans to launch it this week, even though it has a year or so more work to be done on the interior and above the deck.

Vial has been working on his boat for seven years, although he hasn't been able to devote full time to it. Once the craft is finished, he is going to set sail for the Seven Seas, island-hopping through the Caribbean and later across the Pacific.

While these dreams could be called commonplace among men, Vial has a head start on the project, since his father was a seafarer of considerable ex­perience. Vial is investing considerable time and skill in his vessel, handmaking everything from the keel to the swivel chairs in the galley.

He designed the boat himself, using a Nova Scotia bow and special stern shape. The  deep draft hull will lessen wave action on the whole, Vial ex­plained. The craft will have a relatively short mast, a 50 yard arm and will be classified as a sloop.

It will feature two staterooms and a modern galley, complete with an up-to-date electric system and generator. "I built it with three things in mind," Vial said, "design, durability and comfort." There can be no question as to its durability. Every piece is fitted and well fastened into place.

Vial will be taking along a crew of two persons, and while he hasn't chosen who they will be, he has had several people to volunteer their services.

It'll take two people to handle the craft on the sea, he figured, since they will be under sail most of the way, saving the fuel on board for the generator.

Vial built the boat to satisfy his own desire to have one made exactly to his specifications. "I  wanted to build a boat, so I built one," he commented.

A few years ago, he built a 60-foot sailboat for several scuba divers who wanted to visit islands of the South Pacific. Their plans did not materialize, however, and the boat was sold to another party. To carry out the idea of island hopping, Vial then turned to the building of his own boat.

Some of the material he is using comes from sunken vessels n Lake Pontchartrain. The lumber used on those old wooden ships was virgin timber, strong, sturdy material that isn't even available today. As a result, Vial's boat is turning out stronger and better built than anything one could buy on the market.

While island-hopping through paradise is his goal, he realizes that he'll have to be cautious about some islands. Political uprisings in the Caribbean have made some ports dangerous places to put in for supplies, he said.

Vial's father became a cabin boy on a large cargo schooner when he was nine years old, serving under a captain who was from Mandeville. His father advanced from cabin boy all the way up to captain of a sailing ship, and when in home port, he turned to the building of ships.

This is where Louis Vial learned his skills in shipbuilding, the same skills he is using today in con­structing his own boat. He came from a family of five brothers and one sister, and only one other brother has shown continued interest in the building of boats.

Vial knew what he wanted when he began building his craft, and he hasn't had to change his design at all. The boat is turning out just as he pictured it, he said, even without drawn plans.

It won't be long before he and his two crewmen embark from the port of Mandeville on their round the world cruise from island to island taking in the sights and sounds other men can only dream of. After seven years of hard work such as building a boat, the trip will undoubtedly be well deserved.
Here is the newspaper clipping from which the above information came. Click on the image below to enlarge the view. 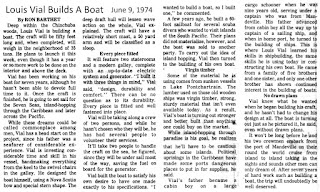 In a June, 2011, Facebook post, Jimmy Ernst reported that Vial named the 50 foot boat Lady Gump. "He launched it at the harbor in Mandeville where he kept working on it and I got to ride with him on it when he moved it to the Rigolets to finish it," Ernst said.  "He was going to sail it around the world but sold it because it would take a crew of 3 and he decided he wanted to go alone. He then built a smaller boat he could sail by himself. I don't think he ever got to sail around the world." 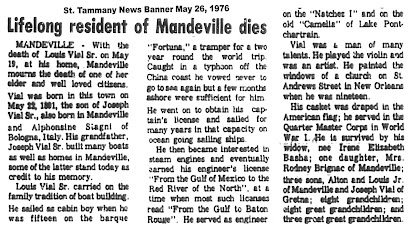