When A Museum Becomes History

Once upon a time (or 1972), there was a museum on U.S. Hwy. 190 just north of Mandeville, near where Troop L of the Louisiana State Police has its headquarters building. However, the St. Tammany Museum was in the way of highway improvements (namely the four-laning and new service roads of U.S. 190), so it was earmarked for destruction. I was one of the last people to go through the museum before it was dismantled, the exhibits taken away and the building torn down. I don't know what happened to all of its exhibits, but I hope they are still around and being cared for by someone.

I took a number of photographs during that visit, some of which are posted below. It was one of many private museums in operation in St. Tammany, a testimony to the appreciation of the past and the value that so many Northshore residents place on their heritage. To read more about the museum, click on the image of the article below, then click on the photos below to see them up close. 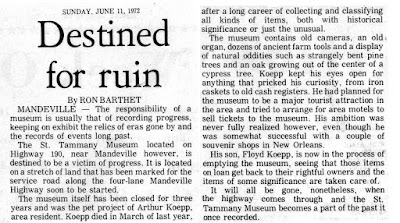 MANDEVILLE — The responsibility of a museum is usually that of recording progress, keeping on exhibit the relics of eras gone by and the records of events long past.
The St. Tammany Museum located on Highway 190, near Mandeville however, is destined to be a victim of progress. It is located on a stretch of land that has been marked for the service road along the four-lane Mandeville Highway soon to be started.

The museum itself has been closed for three years and was the pet project of Arthur Koepp, area resident. Koepp died in March of last year, after a long career of collecting and classifying all kinds of items, both with historical significance or just the unusual.

The museum contains old cameras, an old k organ, dozens of ancient farm tools and a display of natural oddities such as strangely bent pine trees and an oak growing out of the center of a cypress tree. Koepp kept his eyes open for anything that pricked his curiosity, from iron caskets to old cash registers.

He had planned for the museum to be a major tourist attraction in the area and tried to arrange for area motels to sell tickets to the museum. His ambition was never fully realized however, even though he was somewhat successful with a couple of souvenir shops in New Orleans.

His son, Floyd Koepp, is now in the process of emptying the museum, seeing that those items on loan get back to their rightful owners and the items of some significance are taken care of. It will all be gone, nonetheless, when the highway comes through and the St. Tammany Museum becomes a part of the past it once recorded. 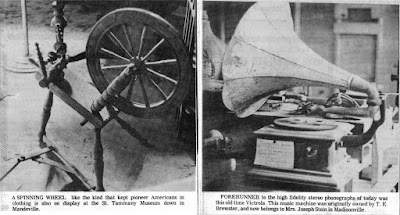