Around the 1900's and even into the 1920's, St. Tammany Parish was advertising itself as the Heart of the Ozone Belt: something to do with the water, the air, or pine trees (or a combination of the three) was credited for reducing respiratory ailments, keeping yellow fever at bay, and generally good for whatever ails you. 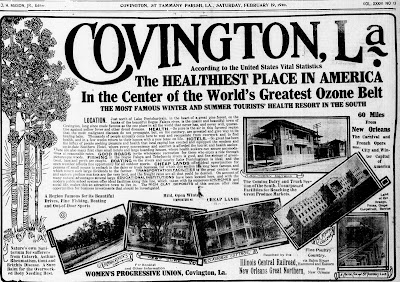 Since this was a known fact (or somehow suspected to be possibly true), it became a big draw, and hundreds of people converged on the parish each year to experience its health-providing benefits. The chamber of commerce, real estate promoters, and the operators of the various sanitariums across the parish touted this Ozone in the air to be a good reason to visit and/or come to live in St. Tammany. 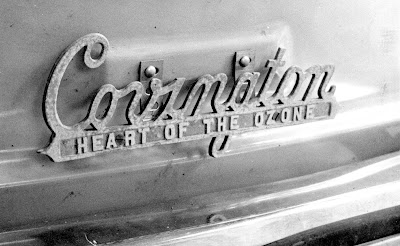 One story I read told the following "true" account. A woman who lived in New Orleans around  1900 was plagued with a health issue and all the finest doctors couldn't help her. She traveled across the United States (at considerable expense) looking for the medical solution to her condition. She decided to go to Europe and visit the best doctors and health retreats over there.

Finally a French doctor, after evaluating her problem, told her of the only solution he knew of, and that was to move to a little place called "Abita Springs" a town near New Orleans, Louisiana, in the United States and live there for several weeks. The town had gained the international reputation of one of the few places in the world where the "ozone air" would help speed her recovery.

So she came back to New Orleans, moved to Abita Springs for the suggested time period, and was indeed helped. As a result of that reputation, there were hundreds of hotel rooms in Abita Springs and Covington at the height of the area's health resort time period. 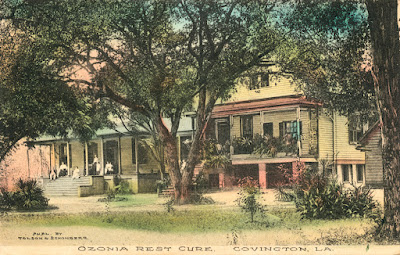 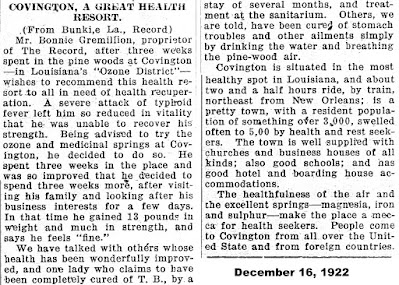 Then came the 1960's and 1970's, when all of a sudden ozone in the air was considered a hazardous pollution. Cities began issuing ozone alerts. Ozone was said to be causing respiratory problems. So which was it? Was ozone in the air a good thing or a bad thing?

The States Times newspaper wrote an article about the situation in 1979 addressing Ozone's threat to human health. It turns out that St. Tammany promoters had just attributed the health-giving benefits to the wrong gas. The pine trees were the actually the benefactors, with their release of "terpene" gas, what we call pine fragrance.

Here is the text from the State-Times article in 1979.

It took the federal government to declare ozone, a recent factor surfacing in Louisiana's environmental picture, a menace to human health?

It wasn't always so. In fact, since about 1888 St. Tammany Parish has touted ozone long and loud, and, in the process, developed something of an national reputation as a renowned health spa.

"The World Famous Ozone Belt," heralds a brochure from that earlier period. "Ozone, as is well known, is a very active form of oxygen, distinctly antiseptic and germ-killing in its —nature and specific in its tonic effect upon the human system. All plants give out oxygen, but only in such favored areas as this (St. Tammany Parish), oxygen takes the ozonated form, spiced with balsamic essences of pine, the breathing of which refreshes and lanes up the system," the brochure elaborates.

Bertha Neff, a lady nearing 90 years of age, St. Tammany's parish archivist, and an historian of some repute in Covington explained how it all got started.

In 1888, she said, a group of real estate men bought a large parcel of land near Covington with intentions of developing it for the tourist trade from New Orleans. Their development was not exactly new. Since 1856, with the discovery that the waters from 280 natural artesian springs at Abita Springs, four miles east of Covington, were "highly medicinal," she said, New Orleans residents of means had been escaping from that city during the summer months when malaria and typhoid outbreaks were frequent.

In New Orleans, Mrs. Neff said, water for household uses, particularly drinking, was caught in cisterns. Residents didn't know exactly why, but they had connected drinking the cistern water with various diseases. It is now understood that the cistern water was a favorite breeding ground for mosquitos, the carriers of malaria and typhoid.

But it took the 1888 entrepreneurs to add a new wrinkle to the tourist attractions of St. Tammany. That wrinkle was advertising and, for the time, massive amounts of it.

It was in this real estate advertising that the first full-scale use of "ozonated air" was employed as a calling card. Exactly who thought up the idea is obscure, says Ron Barthet with the St. Tammany Historical Society. But a number of real estate booklets furnished by Barthet attest that it was peddled as one of the major attractions.

One of the "rest homes" was even named Ozonia. An advertisement says of the establishment, "Cool and shady in summer, surrounded by grand old oaks and health-giving pines. Alluring in autumn, when the bracing air invites to walks through bright-hued forests and boating on the Bogue Falia(sic). The tables are supplied with the best the market affords and the purest of artesian water. Modern in every respect, sanitary plumbing, gas, hot and cold water baths. Here is no danger of malaria or yellow fever."

So the "health giving ozonated atmosphere," and especially the waters, were widely acclaimed. Another brochure states, "According to the United States health 'statistics at Washington, Covington is the second healthiest spot in the United States. The natural springs are highly medical and especially helpful in the healing of all kidney troubles, liver diseases, dyspepsia, chronic diarrhea; catarrh, constipation, nervousness, general debility, and almost any unnatural condition."

And on that, and other claims like it, St. Tammany built its reputation. And the name if not the reputation persists still. Newspaper records mention the Ozone Produce Company, Ozone Waters Inc. and until the last few years there was the Ozone Festival. The Miss Ozone beauty pageant was held in Ponchatoula until the late 1950s when it was moved under the same title and held variously in Baton Rouge and Baker.

And in 1974, Barthet said, the St. Tammany Police Jury was giving out "real ozone air from St. Tammany Parish." In one newspaper clipping from 1974, Pete Fitzmorris of Covington came to the Capitol to give several state officials' samples of the canned ozone. St. Tammany residents "just get under pine trees and start putting lids on cans, trapping the cleanest and healthiest air in the world," Fitzmorris said at the time.

But, rest easy St. Tammany residents, your air may still be the cleanest and healthiest in the world. At least the federal government had no quarrel with the air in your area when it designated Louisiana's four largest cities and 19 parishes as violators of federal ozone guidelines.

Sad to say, however, that there may be some need to redirect the wording of you promotional material because what you have is not ozone at all. That "distinctly antiseptic and germ-killing" fragrance, to borrow the phrase from the turn of the century literature, is the same as used in many pine-scented room deodorizers.

Pine Trees Are The Key

It is in fact from your pine trees, but ozone it isn't. What it is, however, is a type of hydrocarbon known as "terpene," a gas given off by all evergreen trees and a few other types of plants.

According to physical scientist Mark Scruggs, with the U.S. Environmental Protection Agency in Dallas, ozone is not emitted by any land based source; be it trees, automobiles or petrochemical complexes.

Ozone is a "secondary reaction" occurring in the atmosphere, he said. "The trick to remember is nothing is going to give off ozone." Ozone forms after reactive hydrocarbons, one of which is terpene, combines with nitrogen oxides and sunlight in the air, he said.
Scruggs also emphasized that "You have to have just the right ratio of nitrogen oxide compounds to reactive hydrocarbons to be conducive to ozone formation." This, he said, is not normally found in rural areas. The proper ratio of nitrogen oxides to hydrocarbons for ozone formation is generally found only over urban areas.

So, take heart St. Tammany. How about "The World Famous Terpene Belt?" 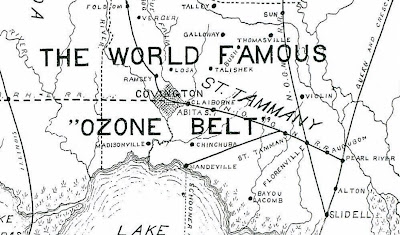 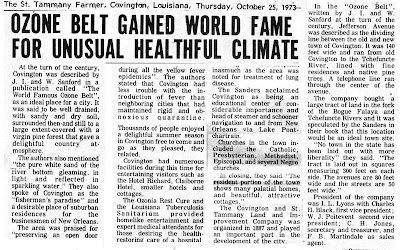 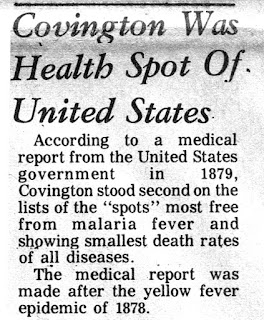