Joseph B. Lancaster was a man who knew how to get things done. His vision led to a more effective public school system throughout St. Tammany Parish.

A few years back when the School Board was looking to name the new elementary school in Madisonville, Lancaster's name came up, and after a little historical research, people were astounded by how much this one man had achieved. 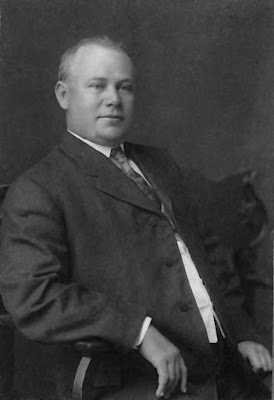 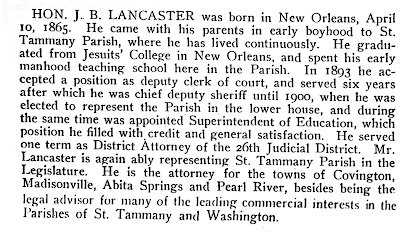 Not only was he the head of Covington Hook and Ladder Company at the onset of the 20th century, he the first Superintendent of Schools for the St. Tammany Public School System (starting in 1900) as well as a state legislator who served two terms, an attorney, a district judge, and a loving husband and family man.

The list goes on, but so do the letters. He was a prolific letter writer, and because of that, we know of his many thoughts, feelings, and beliefs, personal and public. His letters to his wife were published in a book, and a large book it was. He was especially devoted to community service, the kind that leads to the betterment of the community even if it means the sacrifice of personal time and attention. He was great at motivating people to do what they knew in their hearts must be done.

His grandson, Peter Garcia, himself a district judge, said it well during his presentation before the school board a few years ago as it was considering naming the new school after Lancaster. Click here for an MP3 audio file of Garcia's remarks about Lancaster, his background, his accomplishments and his potential for positive influence on the St. Tammany community. 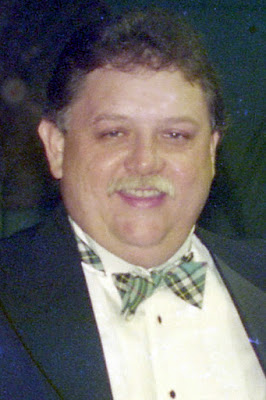 Lancaster also wrote a letter to his school officials throughout the parish in 1900, telling them of the importance of public education and their part in the grand mission. Peter Garcia also made a recording of what that letter said. To hear the letter being read by Lancaster's grandson, click on this link.

In 1905, a Covington booklet described his accomplishments in detail. Click on the image below to read what they had to say about the community leader. 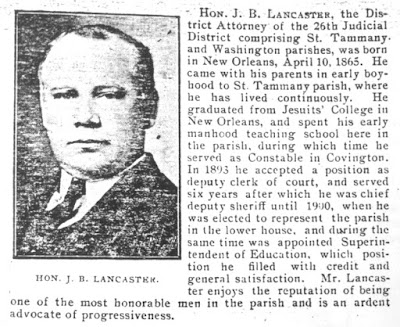 Judge Lancaster died on May 30, 1916, which was just over 100 years ago. Here is the newspaper article reporting his untimely death. 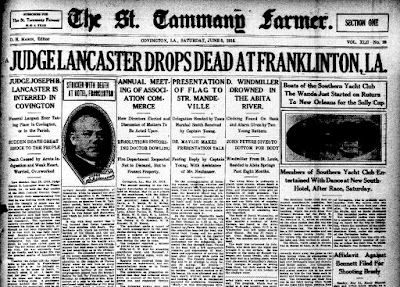 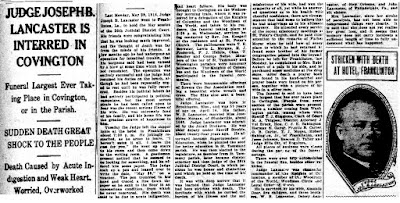 In October of 1916, a special memoriam was presented to the Louisiana Supreme Court honoring Lancaster for his work as a judge and his many contributions to the community. Below is a newspaper article detailing that Supreme Court tribute.

A book was written by Christian Garcia in 2012 about Joseph B. Lancaster and his wife Amanda Lancaster, detailing their love story as told in letters written between the two more than 100 years ago. For more information about that book, CLICK HERE. 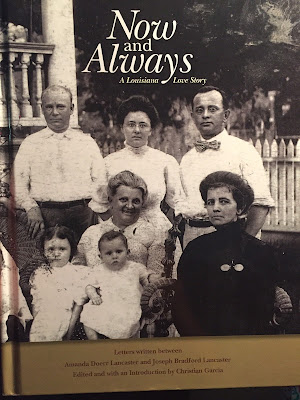 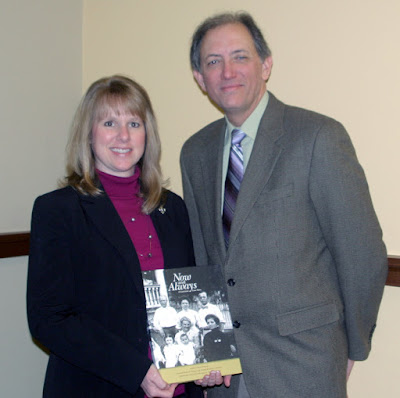 Susannah Welch, principal of Lancaster Elementary, receiving the first copy of the Joseph B. Lancaster book from Chris Garcia, the writer

"On April 10, 1865, in Brookhaven, Miss., a son was born to William Blair Lancaster and his young wife, Josephine Morgan, the daughter of Gen. David Bannister Morgan and Marie Constance Baham.

"Gen. Morgan had been second in command under Andrew Jackson during the Battle of New Orleans. William and Josephine named the boy Joseph Bradford Lancaster.
Young Joseph, after attending private school and graduating from the Jesuit college in New Orleans, returned to his roots in St. Tammany Parish and began teaching school.

"In 1893, Joseph accepted a position as deputy clerk of court from the new clerk, Harrison R. Warren. Lancaster remained in this post for six years, after which he became a deputy sheriff for a time under Sheriff J.J. Stroble.

Having been bitten by the political bug while roaming the halls of the courthouse, in 1900 Joe Lancaster ran for and was elected to represent St. Tammany in the Louisiana House of Representatives, where he served two terms.

"Also in 1900, Lancaster was appointed superintendent of education in St. Tammany and has been credited with bringing the school system into the 20th century and paving the way for the superior education system we enjoy today.

"After reading law with local lawyer Ben Miller and passing the Louisiana Bar, Lancaster ran for and was elected to the office of district attorney of the 26th (now 22nd) Judicial District, where he served from 1904 to 1908. After deciding not to seek re-election, the office was won by his cousin, Lewis Lovering Morgan of Covington. Upon his return to private practice, Lancaster was named town attorney for Covington, Mandeville, Abita Springs and Pearl River.

"During the fall of 1912, Judge Thomas M. Burns decided not to seek re-election, and Lancaster threw his hat into the ring. On Dec. 7, 1912, he was sworn in as the 24th judge of St. Tammany Parish. All was well for Judge Lancaster, his family and the citizens of St. Tammany until the spring of 1916.

"Amanda Doerr Lancaster, the judge's wife, suffered a major stroke that left her paralyzed, and Joe himself was in poor health from recent surgery. His wife's stroke and his own poor health finally took its toll on May 30, 1916.

"Judge Lancaster was in Franklinton during the Washington Parish court sessions. After a full day in court, the judge removed himself to the Franklinton Hotel. After supper, the judge ascended the stairs to his room, retrieved several papers and returned to the writing room just off the main lobby.

"Lancaster settled himself in, took up his pen, dipped it in the ink well and wrote "May 30th," and sank to the floor. He never regained consciousness.

"The St. Tammany Farmer reported that his body was returned on the Wednesday train and taken to his home on America Street, where the funeral was held at 3:30 p.m. that day. He was interred in the cemetery at St. Joseph Abbey.

"Amanda Doerr Lancaster finally succumbed to her long illness and passed away on May 2, 1930.
"Of the five children of Joseph and Amanda, only Edith and Sister remained connected to Covington. Edith moved back after her own marriage to raise a family of nine children - Edith Constance, Marie Amelie, Yvonne Marie, Joseph III, Michael Lancaster, James Robert, Peter John, Elizabeth Anne and Christian Paul."