Below is a brief history of St.Tammany Parish that was published in the 1970's. Click on the image below to read the text. 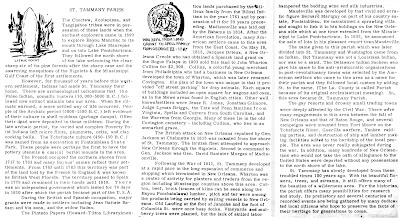 Below is an article from the 1981 Covington Chamber of Commerce magazine that also gave a brief history of St. Tammany Parish.

The History of St. Tammany Parish

St. Tammany is rich in history. This beautiful, thickly wooded area of pine, oak, magnolia and many other trees supported a large Indian population. Records of prehistory activities can be read from mounds and mindens still untouched by archeologists. It has attracted settlers almost from the beginning of its discovery by the white man.

It, with the other Florida Parishes, to distinguish them from the rest of Louisiana which was part of the Louisiana Purchase, has history dating back to the time of Bienville and Iberville. They passed through here on the way to found the city of New Orleans.

One could say that St. Tammany was discovered 282 years ago, in March of 1699, and has been involved in making history ever since. The parish fronting on Lake Pontchartrain attracted settlers from the Eastern Seaboard and the Gulf Coast area. It has flown the flays of France, Spain, a short-lived independent statehood and that of the United States. It flew the flag of the Confederacy during the Civil War.

The territory was annexed to the United States by Madison in 1810 after the West Florida Rebellion. Governor W. C. Claiborne carved the area into four parishes, naming St. Tammany for a Delaware Chief. His name, Tamenand, meant friendly or affable to the white people, hoping the restless Indians would take the hint.

Governor Wm. C. C. Claiborne gave the name "St. Tammany" to the parish after the revolt of the settlers in the District of St. Ferdinand in Spanish West Florida. This resulted in a short-lived republic which accepted the flag of the United States when Governor Claiborne sent Colonel Covington to convince them. This same Covington, later a general, died in the War of 1812.

It was not until the middle of the 18th century that any whites settled west of the Pearl River. After the Revolution some families emigrated from Georgia, the Carolinas and Virginia, and settled in this unbroken wilderness.

The first courthouse was erected at a place called Claiborne, on the west side of the Bogue Falaya, about opposite to the present town of Covington, but the parish seat was removed to Covington in 1829. St. Tammany is situated in the extreme southeastern corner of the state and from its original territory have been carved Washington Parish and a part of Tangipahoa.

It is now bounded on the north by Washington Parish; on the east by the Pearl River, which separates it from Mississippi; on the south bounded by Lake Borgne, Orleans Parish and Lake Pontchartrain; and on the west by Tangipahoa Parish.

At the time of its founding, the population of the parish was predominately Anglo-Saxon, and English was the language and culture. In 1819 the population of St. Tammany Parish was 4,000. By 1860 it had grown to 5,406 (1,841 of which were slaves.) St Tammany Parish today consists of 1411 square miles, with a population of approximately 92,585. Today, family names like Baham, Badon, Jones, Collins, Gibson, Ellis and Morgan are found throughout the parish and are the descendants of the original settlers.

Large brickyards were maintained and lumbering was a very important industry up to the Civil War, but with the end of slavery these industries nearly ceased and many years elapsed before they were renewed. The main water courses of the Parish are the Pearl River on the east, The Tchefuncta River on the northwest, the Bogue Chitto River in the northeast and the Rogue Falaya through the central portion and their many tributary streams, all of which are used in the extensive lumber industry.

About 1856 it was discovered that the springs around Covington possessed medicinal properties. The most famous spring is the Abita, a few miles northeast of Covington, with a capacity of 40,000 gallons a day, and the water is bottled and exported. Large hotels were built and this district was a resort the year round for both northern and southern people.

St. Tammany has a level and undulating surface formed of coast marsh, pine flats, pine hills, alluvial land and wooded swamp. The parish lies in the southern part of the long leaf pine region and almost its entire area is heavily timbered. The principal growth is pine, though oak, beech, gum, dogwood, and holly are found in the river and creek bottoms.

Along the shores of Lake Pontchartrain are large tracts of live oaks that grow to great size and for many years were practically uncut. The soil of the bottom lands is of alluvial deposit that produces fine cotton and cane. The proximity of St Tammany to the New Orleans market, and the cheap and excellent transportation facilities, make almost any Industry of the parish profitable.

The principal farm income is from nursery crops, but sugar, rice, cotton, corn, hay, oats, beans, potatoes, all kinds of garden vegetables, fruits and berries grow well here and are raised in small quantities. Stock raising and dairying have increased as timber has been cut, and are paying industires to the farmers in the parish. The rolling hills around Folsom are ideally suited for the breeding of thoroughbred horses. There are many fine ranches located in the parish.

The rivers of St. Tammany bear Indian names and are lovely winding streams lined with cypress and pine. Two rivers meet at a point just below Covington. Here there was once a wharf called Old Landing and Old Landing Road leading to it. This area exists today. The two rivers are the Tchefuncta and the Bogue Falaya. Tchefuncte means chinquapin, and Bogue Falaya means long river.

The Little Bogue Falaya, a branch of the larger river, flows parallel to Military Road. This was once the direct artery of travel to and from the mid-west. There was once a fort where the Bogue Falaya and the Abita Rivers join, and this area Is now called Three Rivers. Bayou Ponchetolawa, Bayou Chinchuba and Bayou Lacombe are also In this area.

The climate is hot, humid, sub-tropical, with an average daily temperature of 55 degrees F. in Winter and 82 degrees F. in the summer. Yearly precipitation is 60 to 64 inches. Because of the heavy cover of pine forest, the area is famed locally as an "Ozone Belt" with better air conditions than usual in Southern Louisiana. Additionally, the region is fortunate in having exceptionally good underground fresh water supplies.

Click on the image to make it appear larger.