Here are a number of photographs of the Trolley (also called the Motor Car) that ran on tracks between Covington and Mandeville through Abita Springs. 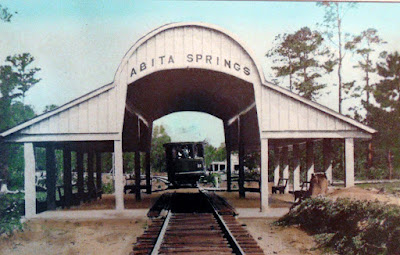 Historical records tell us it operated between 1909 and 1918. According to historian Dr. Karl Koenig, "this railroad, built in the early 1900's, ran from Covington to Mandeville, passing through Abita Springs. It was called the "Doodlebug". The first such train was gas with a later one being run by electricity. The depot was on the site of the present Covington City Hall. It ran several trips a day to meet the boats that landed in Mandeville. It was very popular with young people and presented a very pleasant outing because big excursions came from New Orleans to Mandeville on weekends." Click on the images to make them appear larger. 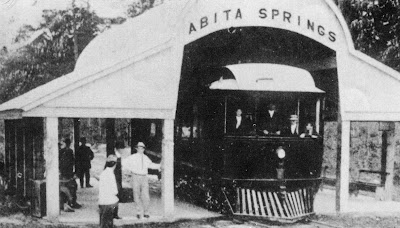 This photo shows the Abita Springs Trolley Station, a popular place for sure on those summer weekends when the New Orleans folks would get off the boats in Mandeville and head for Abita Springs and Covington Hotels. Click on the image below to see a larger version. 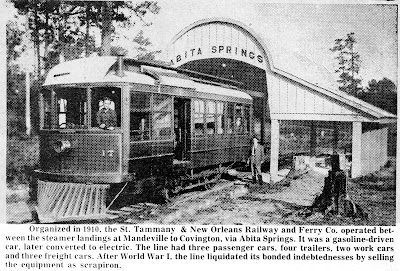 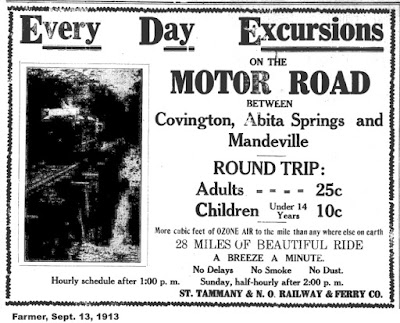 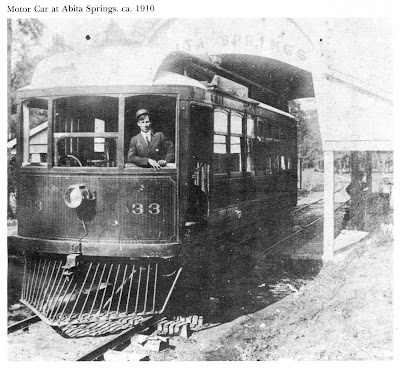 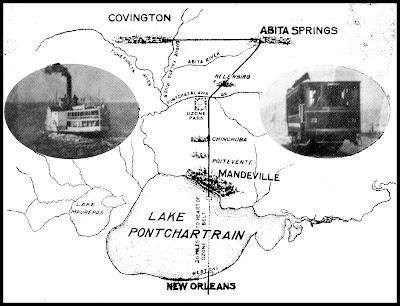 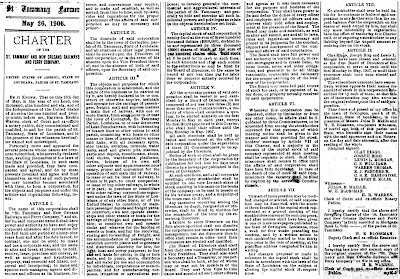 1906 Charter of the Trolley Company (Click on to enlarge) 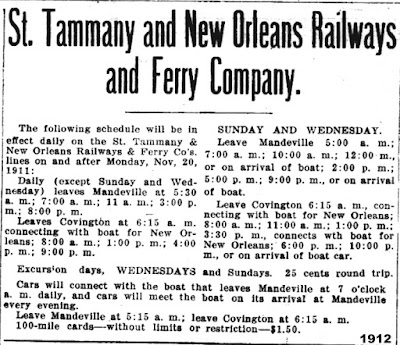 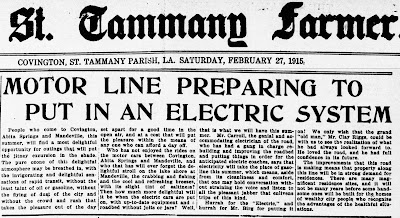 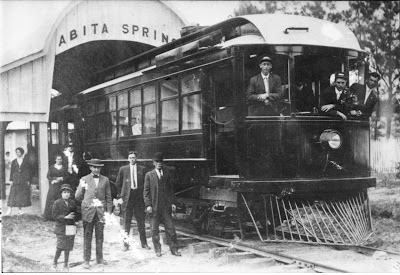 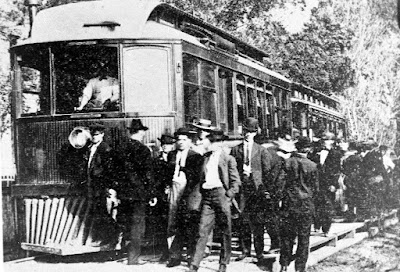 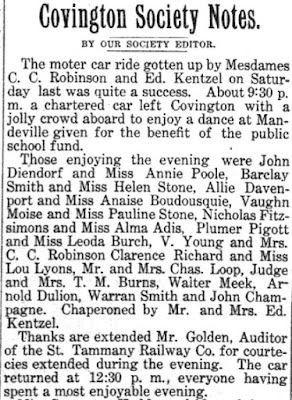 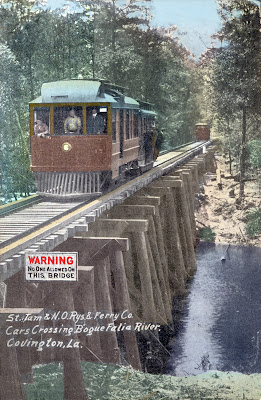 Historian Dr. Karl Koenig quotes Philip  Burns, a resident  of  Covington,  as saying that the trolley ran from the Mandeville lakefront to Covington. He said, "Sometimes  in  the  early  1900's  a  railroad  line  was  built  which  went from  Covington  to  Mandeville,  going  through  Abita  Springs.  Called  the "Doodlebug," the first one was gas, and then a later one was electric.

"This car ran several trips a day to meet the boats that landed in Mandeville to go to  New  Orleans.  It  was  a  very  pleasant  outing  for  young  people  because big excursions came from New Orleans to Mandeville on weekends. It was a good way to spend an hour and a half with your girl and enjoy the good music  the  people  on  the  excursion  had.  We'd  go  to  Mandeville,  then  ride the  boat  over  to  New  Orleans  and  come  right  back.  There  was  a  big wooden  walkway  on  the  beach  in  Mandeville  so  people  could  walk  right out on it into the boats." 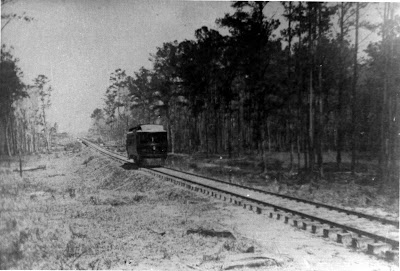 When it reached Mandeville, the train track ran right onto a pier off the lakefront so passengers getting off a Lake Pontchartrain steamer could jump right on board the train without even going to land first. 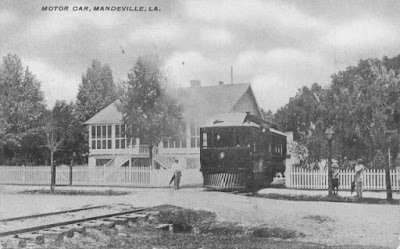 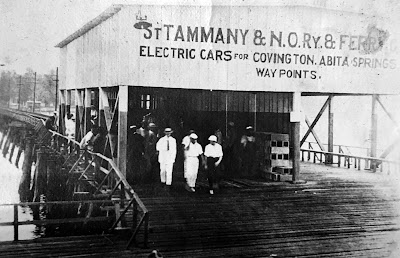 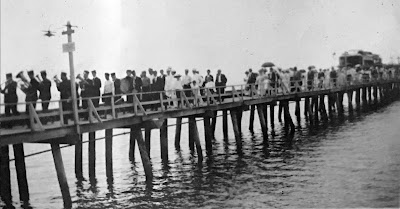 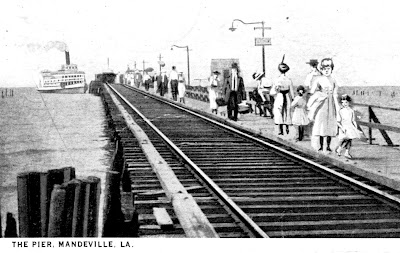 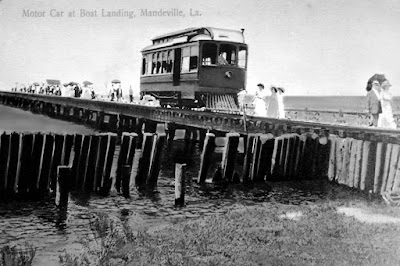 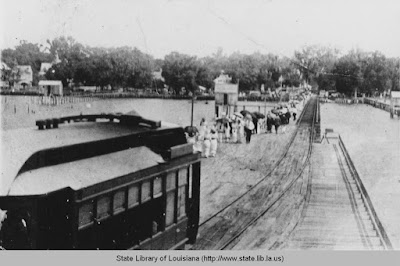 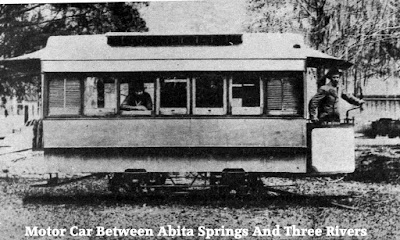 Here is a map of the path taken by the Trolley Motor Car. As the map shows, the trolley tracks were different than the NOGN railroad tracks that Tammany Trace follows today. The trolley tracks crossed the Bogue Falaya River further upstream, travelled above La. 36 for a while, then crossed downward and entered Abita Springs south of the railroad tracks.

Heading southward, the tracks for a while paralleled Soell Drive and Helenbirg Road, then headed straight for Chinchuba, where the La. 22 and Hwy. 190 intersection is today. From there the tracks came into Mandeville, zig zagging through the street grid, and finally crossing Lakeshore Drive and going out onto the pier where the lake steamers docked.

It appears to have crossed Lakeshore in the area between Coffee and Carroll Streets. Click on the images below for a larger view. 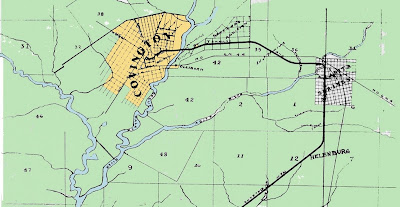 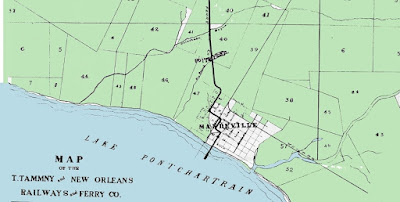 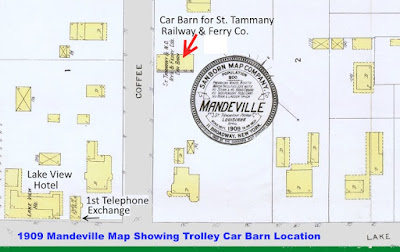 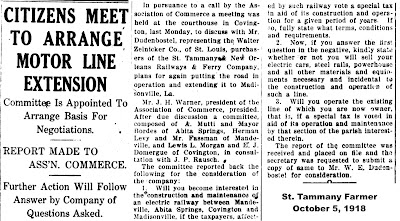 Efforts were made to save the trolley line and even expand it to Madisonville. Unfortunately, it failed to continue operation and the assets were sold for scrap.

The man who built the trolley motor car line died shortly after it was sold for scrap.

Joseph Birg, 69 years of age, leading sugar and rice planter, director of a number of banks and builder of the electric railroad from Mandeville to Covington, died at 9 a. m., Monday. November 25, 1918, at his residence, 826 St. Charles avenue, New Orleans, after a few day's illness.

Mr. Birg was a native of Franklin, St. Mary parish, where he lived practically all of his life. He was one of the organizers of the First National Bank at Franklin, which was St. Mary's first bank and later it was merged with the Commercial Bank & Trust Company and Mr. Birg was president from 1906 until the time of his death.

He was the owner of Katie Sugar Plantation, a partner in the operation of the Camperdown refinery and a director of the Louisiana State Rice Milling Company, Inc. He served on the police jury of St. Mary parish for many years.

Mr. Birg's private philanthropies were numerous. He was modest, of a retiring disposition and enjoyed a
large acquaintance in New Orleans and throughout the state.

He was a son of Felix Birg and Mary Ann Birg. The death of his sister, Helen, five years ago, affected him deeply and later he named the township between Covington and Mandeville "Helenbirg."

The visitor's center museum at the Mandeville Trailhead offered this information on the "boat train" trolley.