In mid-December, 1814, General Andrew Jackson came from Mobile, AL,  through St. Tammany on his way to New Orleans. He and his staff entered Louisiana near where the Bogue Chitto River meets the Pearl River, then came southwest towards the Bogue Falaya River and Covington.

According to the diary of General Jackson's aide, Major Howell Tatum, the group traveled south from Covington to Madisonville crossing the Chefonta (Tchefuncte) River three miles upriver from the lake.

Tatum wrote that Madisonville was the most advantageous place of landing for all travelers from New Orleans who were heading to Tennessee, Kentucky, and Mobile. "Great quantities of tar, pitch, and turpentine might be prepared for use and exportation," he went on to say about the area.

Later, Jackson initiated efforts to have a road built from Madisonville through Covington and northward to Tennessee. 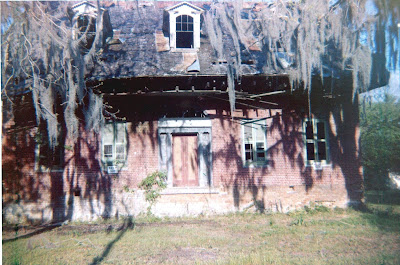 The Oak House (Picture taken in April of 1961)
Click on the image to make it larger.

According to Iris Lulu-Simoneaux Vacante (on the Madisonville Vintage Facebook Page), the building shown above was known as the "Oak House" and was the subject of a Times Picayune article many years ago.

That article stated that  "The Oak House once served as a Hotel and also served as the Headquarters for the Confederate and later Federal forces during the War of the 60's. Having years paid taxes on the untenable but time hallowed house, the owners are, quite understandably, considering its demolition. It is hoped means may be found to avoid this.

"Its masonry and structures being still in good shape the house could be restored and turned into a museum for the Indian artifacts and colonial relics abounding in the area. The cost for such an interesting and informative establishment would be infinitesimal compared with the historical value. Being outside of the original settlement, Oak House was hardly noticed by Major Amos Stoddard who in 1812 visited the place. In his book "Louisiana Sketches" he described Madisonville as "...half a dozen French built mud-walled huts and about as many log cabins....an eligible spot for a seaport."

From the government archives website, " Amos Stoddard (1762–1813), lawyer and soldier, was a native of Connecticut who joined the Continental army in 1779 and served until the end of the war. He obtained a post as assistant clerk to the supreme court of Massachusetts in 1784, was admitted to the Massachusetts bar in 1793, moved to Hallowell in the Maine district, and represented it in the Massachusetts legislature in 1797. In 1798 Stoddard became a captain in the 2d Regiment of Artillerists and Engineers, United States Army, rising to the rank of major in 1807. He took possession of upper Louisiana for the United States in March 1804 and served as its civil and military commandant until later that year. Stoddard was subsequently assigned to lower Louisiana, about which he collected material for a book. He served as deputy quartermaster general during the War of 1812 and was mortally wounded during the seige of Fort Meigs, Ohio."