This postcard features "Benty The Hermit," a well-known Mandeville area personality in the early 1900's. 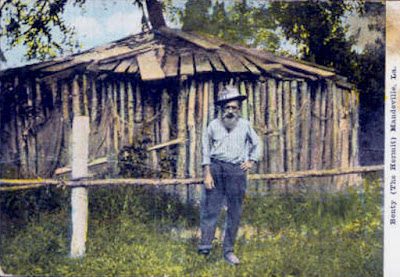 Here is the story of Benty from a Dec. 22, 1912, Daily Picayune article which was written a few days after his death. How and why he became a hermit is quite interesting, if not a little bizarre.

HIS HUT IS DESERTED

Queer Misogynist, Who Found Solace in Silence of the Woods, Has Gone Away

RETURNING from the front at the close of the Civil War to claim the girl he loved, Thom. B. Hefterman found that his sweetheart was the wife of his best friend. Hurt to the
quick, he lost all faith in humanity, turning to the woods, he sought there the balm for his broken heart.

His old haunts knew him no more. As Thomas B. Hefferman, the young soldier who had gone off so gayly to war, he disappeared from the face of the earth, and in his place there dwelt strange creature who came to be known as "Benty," the hermit.

For this reason the announcement of Mre Hefferman's death a few days ago excited no special comment, and only the residents of Mandeville and regular frequenters of the resort  were aware that the deceased was "Benty," as he has been familiarly called for several generations.

The death of this man, whose past was shrouded in mystery, closes a life that for clairvoyance, weirdness and distorted flights of imagery was remarkable. He furnished an endless theme of conjecture among the dwellers on the north shores of Lake Pontchartrain.

That he was of refined parentage and had received educational advantages was demonstrated in his easy and fluent diction. Of himself he never spoke, but sometimes in unguarded garrulity he alluded to interesting events many years ago with a  familiarity that bespoke intimate knowledge, convincing his listeners that some poignant sorrow had caused him to sever all kindred ties and adopt a life close to nature.

"Benty" was the oracle of lovers. For bright shekels he made his predictions, either causing the fond ones a buoyancy of spirits or plunging them into the abyss of despair.

No one of the summer sojourners with a remnant of the quick, joyous throb of youth in his veins ever left Mandeville without penetrating far into the woods to the rude hut of the hermit, being regaled en route with his fanciful ideas and customs that even in the years of his residence in the community had never ceased to create wonderment among those who directed countless visitors into those woodland recesses.

Whether the pilgrimage was in the daytime, a wending of the way through bypaths by horse and carriage or in family carry­all, or, better still, by night, and guided by the effulgence of a summer moon, a trip to "Benty's" hut had the same significance of strange hallucinations and spectacular demonstrations.

Several miles is nothing for pleasure-seekers to traverse, and everyone accepted it in the light of a great frolic.

Along the way mounds, at intervals of several miles apart, were pointed out as sites of former homes of the hermit, who adhering to the conception of a physical change in every seven years, adapted it to abode. In consequence he made a septennial burial of  all household effects, clothing, images and whatever had been acquired since the last change, presumably along with his departed self.

He held a fixed ceremonial before wandering farther into the woods and starting anew the erection of another hut, barely sufficient to shelter him in inclement weather.

Ahead a crimson patch glowed cheerily through the trees, acquainting the party with the fact that their destination was reached. Among the superstitions and credulous of the party curiosity was tinctured with the un­canniness of the surroundings, especially when they were confronted with the queer spectral figures which' "Benty" called "prophets."

Quite an aggregation was supplied by tree trunks, draped with the cast-off clothing given him for his own use by
kind residents.

Conspicuous among them was Lot's wife, who, metamorphosed by the festive attire of a suit that had seen a season's splashing in the surf, and with moss arranged in coquettish Marguerite plaits hanging beneath a rakish cap, stirred the risibilities of the crowd. Past the "prophet" trees more witchery became apparent. Fancy "Benty" in his St. Tammany woods, bringing back the frenzy of witchcraft at old Salem.

Standing at the, entrance to the hut was the hermit, small of stature, but with the sturdiness of the woodman. There was something gnomelike in his shock of gray, unkempt hair and flowing patriarchal beard, silhouetted there against the shoots of flame from the fire over which was suspended a large caldron.

In the caldron smoked a mass of dried leaves, and refuse that emitted an odor entirely foreign to Benty's term of "incense." No introduction was necessary, as "Benty" initiated everybody into his occultism, and never appeared to be taken unawares by visitors.

As the light of enthusiasm and absorption in his chantings illumined the old man's face much of the charlatanism subdued, so that even the more skeptic realized the sincerity of the hermit, who pinned such infinite faith to "spirit" revelations and the weaving of mad-brain fancies.

Paramount was "Benty's" conviction that women were made to suffer for all transgressions, and after death were sentenced to return to earth, in animal form, the nature of the guise being determined by the gravity of the offense.

Thus penalized, they atoned in full measure. His antagonism to the sex led to the general supposition that "Benty" had suffered the smart of unrequited love.

Embittered and brooding, he had cut adrift from conventional life and for years removed from humankind, he had become the tree that died at the top.

With a view to commercialism much of the weirdness was doubtless emphasized, as with the stories of the eccentric recluse came the crowds to appease their    curiosity. They put small coins into the old man's palm, and these constituted his meager maintenance.

Although on the aggressive toward women, "Benty" swore by the "moon, the inconstant moon, that monthly changes in her circled orb," and seemed to have the most unswerving faith in her. His "Lady in the Moon" was the guider of destinies and held within her power endless beneficence.

He never digressed from his method of exhorting her favor, and maintained a wonderful dignity all the while, never descending to discussion of commonplace or current affairs, and holding as if aloof from mundane trivialities.

Standing in the doorway of his hut, he sang a curious conglomeration of hymns, Southern melodies and odd airs in a high-pitched but not entirely un-melodious voice,  interspersed with poetic effusions to the "Lady in the, Moon," beseeching her clemency.

As an accompaniment to his songs he tinkled a little bell, from which all silver-throated lining had been worn and which in its discordance seemed penance sufficient for lurking spirits.

From the mass of burning twigs, along with the acrid odor, was exuded the future of those of the party who wanted their "fortune read." Fire was perpetually burning to ward off evil spirits, evidently of a different variety from those of  which he seemed on friendly terms.

Every cra_______ had a meaning all its own, and for the delectation of the bystanders the hermit interpreted and led in supplication.

In his harrowing stories of meeting persons of prominence who had passed beyond mortal ken and come back to eke out atonement in the woods, and who spoke with him of the sentence imposed upon them before they aspire to higher realms, there was a peculiar rambling tenet of religion, a reverence for the Divine. In his dissertations he often displayed an element of poetic imagery colored with smatterings of Buddhism.

Throughout his discourses ran the counter current of venom directed against women, and in each instance he cited the punishment meted out to her. Lot's wife served a purpose and adorned a tale, as the warning finger was ever pointed in her direction, incongruous and mirth-pro­voking as was her seashore attire.

But the weaver of mad-brain fancies passed away Friday last in a ward of the Charity Hospital, where he had been taken by the mayor of Mandeville. He had been found desperately ill and  suffering great privation in his hut in the woods, to which he had returned to the surprise of every one, after having been removed about six months ago, and placed in the care of the Little Sisters of the Poor in order that their gentle ministrations might soften the old man's remaining days.

But the call of the trees, the queer images carved from them, the birds he loved so dearly and understood, the ashes of the spent fires that needed rekindling, and incantations to the radiant "Lady of the Moon," called him back into his woodland retreat, where he craved to die as he had lived—an alient to mankind.

A unique landmark has passed from the little village on the north shore of Lake Pontchartrain. Even though the gay summer sojourner regarded him as merely an eccentric old man, who garnered the shining coin for snatches of prophecy, awakening badinage for weird, incoherent ideas, there was much to commend in his gentleness and evidences that before the tree died at the top, "Benty" had seen better, fairer days. Who knows but that the story of his love affair was true? Stabbed by his sweetheart and his friend, he had found solace in the sweet silence of the woods. 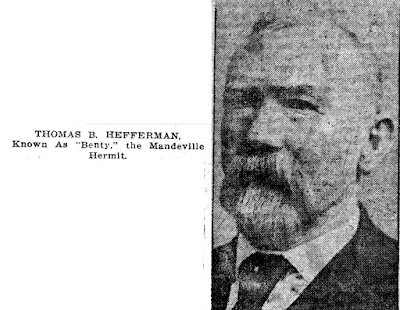