According to notes I found in my files about the founding of Covington, here are some facts, said to be historically authenticated, about John Wharton Collins.

On May 16, 1813,  Dreux sold his town with its claim of four citizens to Collins for $2300.00. The community was named Wharton, in honor of Collins' grandfather John Wharton. 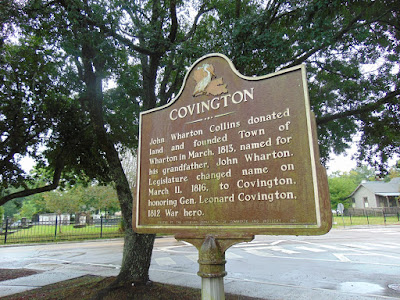 During 1814 to 1815, John Wharton Collins served as Captain in Morgan's 4th Regiment, La. Militia. He took part in the Battle of New Orleans, January 1815 (West Bank).

On February 28, 1816, a bill was introduced in the state Legislature to change the name of Wharton to that of Covington. The bill passed and was enacted into law on March 11, 1816. Covington was named for General Leonard A. Covington , who had commanded the troops at St. Francisville and Baton Rouge when the West Florida revolt was settled.

A year later, in 1817, due to failing health, Collins wrote out his  will. He was confined to bed by September and then died on December 26, 1817, at the age of 29. He was buried in a lead coffin in Covington cemetery No. 1 (in the section opposite the old city hall) at the corner of Columbia and Kirkland Streets in an unmarked grave. (Receipt for coffin is in Courthouse Files) 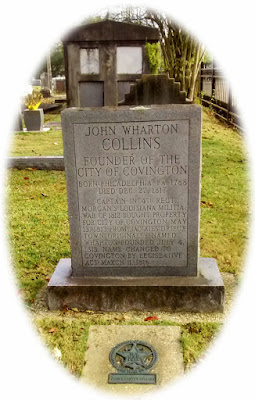 A tombstone monument does note that Collins is buried in the Covington cemetery.


For more information about Collins, CLICK HERE.
Posted by Ron Barthet at 6:00 AM