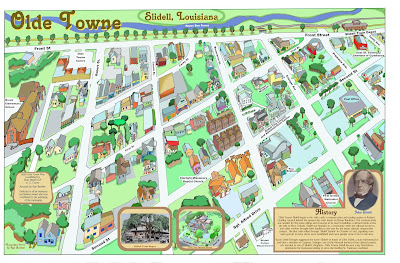 The following articles tell a brief history of Slidell. Click on the image to make it larger. 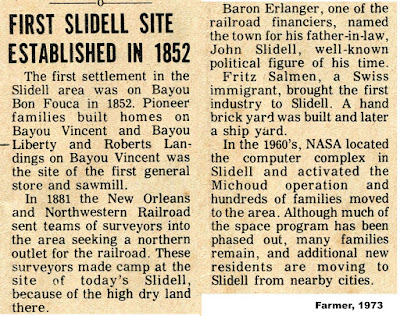 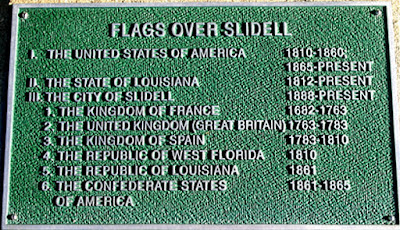 For a brief history of Slidell by Dan Ellis, CLICK HERE.

Text from the article above:
Slidell Wide Awake- Louisiana Town Is Progressing Rapidly
Slidell, LA -- April 14
The little city of Slidell is only 28 miles from New Orleans on the New Orleans Great Northern and New Orleans And Northeastern (rail)roads. It is the first stopping place of any importance after crossing the seven-mile bridge of the New Orleans and Northeastern Railroad.
Slidell also has the distinction of being the largest manufacturing center in the parish of St. Tammany. Real Estate in the little city has been rapidly advancing in value, and the future prosperity of the town seems secured.
Among the numerous manufacturing concerns are The Salmen Brick Works and Lumber Company, Slidell Brick Works and the Southern Creosoting Company, Limited.
C. S. Walker is president of the latter company. H.P. Headley vice president, and J.D. Grant secretary and treasurer. The nature moisture in the timber is extracted by the wood being placed in large vacuum tubes about 263 feet long and 7 and a half feet high. The immense doors are then closed and creosote is pumped in refilling the pores of the wood.
Slidell is so situated that manufactured products can be loaded directly on barges at the factory and sent to Gulf States or to the wharves of New Orleans.
Churches
There are four churches in Slidell, namely: Catholic, Methodist, Presbyterian, and Baptist.
The new Commercial Hotel is another big improvement. This structure is but a block from the depot, and has about thirty-five rooms.
The plant of the Salmen Brick and Lumber Company covers forty acres and includes equipment for making both common and pressed brick, 250,000 or more daily; 100,000 shingles, 60,000 feet of lumber. There are ten machines capable of dressing 50,000 feet of lumber daily.
The Slidell Brick Works was organized Feb. 13, 1897, with the following officers: H. Millett, president; Charles Stoddard, vice president, and George Chariton, manager. This company owns about one hundred and ten acres of land. The fine quality of clay of St. Tammany Parish produces brick of superior quality, being dense, hard and durable. The capacity of the plant is 40,000 or more bricks daily.
Slidell is growing rapidly, and the population will soon reach the 2500 mark.
The Bank of Slidell is a new two-story brick building. The capital stock is $30,000; surplus and undivided profits, net, all earned $4028, deposits $81,743.79. Following are the officers: F. Salmen, president; G. H. Gause and C.S. Walker, vice-presidents; C. A. Evereett, cashier, and T. J. Eddie, assistant cashier.
Published in the Times-Democrat on April 15, 1907
See also: