An article telling about the history of the Schneider Brick and Tile Company in St. Joe (Slidell) was published in the Slidell Times Newspaper on July 4, 1957. Here is a clipping of that article, which was accompanied by several photographs. Click on the images below to make them larger.

History of Schneider Brick and Tile Company
By Phil Oramous

From an humble beginning, the Schneider Brick and Tile Company has developed into the largest single-plant pro­ducer of brick and tile in this section of the country.

Established on its present site in 1880, almost eight full years before the incorporation of the Town of Slidell, the company's plant at 2599 Front Street also has the distinction of being the oldest industry in St. Tammany Parish that is still thriving.

In the beginning the brick business was a sideline to the sawmill business of the founders, Fritz, Jake and Albert Salmen. The clay was crushed and mixed by an old mule on a wheel, and the bricks were hand molded and dried in the sun.

Because the plant was in operation before the coming of the railroad to Slidell, the bricks were shipped to New Orleans and other points by schooner. These boats were built and repaired in a small shipyard on the present site of the F. J. J. Sloat Dredging Company on Bayou Vincent.

About 1920 the sawmill burned, and the Salmens concentrated their efforts on brick making and other interests. In 1922 they sold the yard to a  New Orleans concern, which in turn sold the company to a Nashville chain of brickyards.

Then came the depression and the only time since its founding that the yard was compelled to cease operations. No brick was produced for a 60-day period during the height of the depression.

Claude, Ben and Matthew Schneider came into posses­sion of the industry in 1931 when the yard was sold at sheriff's auction without inventory.

"Our beginning was stormy," remarked Claude Schneider, president and general manager "but now we use all of the most modern brick-making methods ann have the largest plant of this kind in this part of the country.

"We have the capacity to turn out over 100,000 bricks or an equivalent amount of tile a day."
All of the machinery and equipment within the plant has been replaced or remodel­ed within the last 10 years. The Haig Continuous Kiln, which burns the brick at 2400 degrees F., is the largest of its kind in the United States.

One of the most recent mod­ern innovations is also a first for the Schneider company. The plant was the first in the area and is still the only one that packages all of its prod­ucts.
Five hundred bricks (or the equivalent in tile) are wire-bound in packages that elimi­nate handling and get the brick to the customer with less breakage.

The trucks used by the plant to ship some of its products are equipped with special lifts to handle these large packages.

The new method was fea­tured, along with a story about the brickyard itself, in a re­cent issue of the Brick and Clay Record, the national magazine of the brick and tile industry.

The company gets the clay which it uses from huge pits about a mile and one-half south of town. It uses its own dummy railroad to transport the clay to the plant. This hard, yellowish dirt is then dumped into a large crusher which breaks up all the lumps and some dust to bring the clay to the proper consistency. No water is added to the mud, only natural moisture being necessary for making brick.

The resulting mixture is forced through a die (tile is made by merely changing the die on the same machine) and cut to the right size by an overgrown cheese slicer. All scratches and marks are ap­plied as the clay comes from the die.

The new bricks are then stacked in a huge drying room which takes all the moisture and air out of the brick to make it lighter and stronger.

AFTER THE DRYING period the bricks are moved to the kiln where they are baked at 2400 degrees. The color of the brick is determined by how long it is burned and the length of time it is allowed to cool off. Here again nothing artificial is used, only the natural clay, according to Robert Rugan, superintendent of production and shipping.

The bricks then go from the kiln to the mechanical lift packaging unit, and then to the consumer. The kiln itself is 600 feet long and 150 feet wide. Fires are set in one end of the kiln and the heat and the fires gradually progress around the circular affair until the bricks have been burned for the re­quired length of time.

Natural gas is used for fuel in the kilns. The brickyard was responsible for bringing natural gas to the Slidell area.

"Gas produces a tremendous­ly hot flame and is best for our purposes," commented Mr. Rugan, who has been with the company for over 22 years.

Since, hot air rises, much of the heat produced in the kilns would be wasted. This is pre­vented by a large duct built from the top of the kiln _to carry the excess heat to the air drying rooms. This saves on fuel costs in that other fires do not have to be started to dry the new bricks.
Most of the day's work is done by the yard's 95 em­ployees before noon. The day begins at 5:30 a.m. in order to catch the cool hours of the morning.

The atmosphere around the kilns often reaches a very high temperature. As soon as a worker "makes his day" he is allowed to leave and is therefore not exposed to the excessive heat of the afternoon.

An "invention" worked out by several of the employees is used to cool off the kiln. Water is sprayed from a series of pipes around the outside of the kiln and several huge fans pull the moisture through the opened furnaces. This method cools the atmosphere around the furnaces by about 60 or 70 degrees within 24 hours.

The Schneider family has been in the brick making busi­ness for a long time. P. W. Schneider, father of the three men who purchased the yard in 1931, began operations at St. Joe Brick Works near Pearl River over 65 years ago.

Pete, a member of the third generation of brick-making Schneiders, is now in charge of St. Joe. It did not take long for Schneider bricks to become famous. Builders, contractors
and architects often specified that they wanted St. Joe brick to be used in their buildings. Thus it was that the name "St. Joe" came to be stamped on each and every brick pro­duced at the plant. 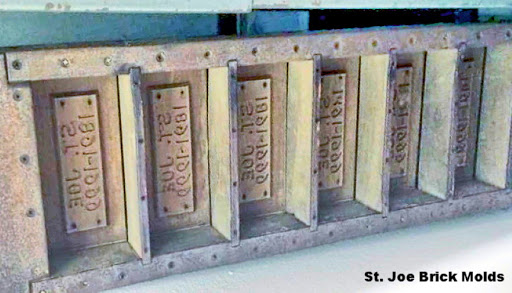 Bricks were hand made and sun-dried in St. Tammany Par­ish, however, long before the advent of the Salmens. Clay pits still may be found in the northern part of Slidell and its environs.

Brick from St. Tammany was shipped across the lake to New Orleans, and many of the oldest buildings in the city (notably in the Vieux Carre) were built with St. Tammany brick.
The local industry did not progress without its more re­cent trials and tribulations. In the hurricane of 1947 half of the roof of the kiln was blown down.

Several fires harrassed the company, especially in August, 1952, when the entire rod of the kiln as destroyed. This, however, allowed the brickyard to come back even stronger, as the plant is now completely fireproof.

Its all-steel roof is the largest of its kind. It is estimated that the com­pany owns enough land for pits to produce sufficient clay to make 100,000 bricks a day for the next 75 years. 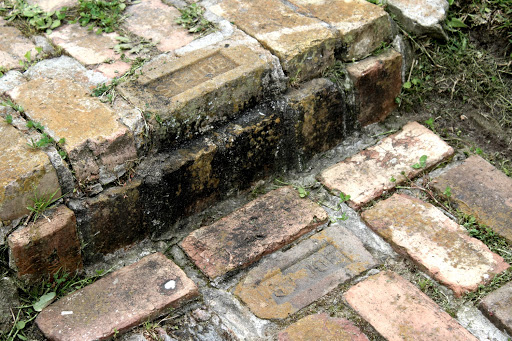 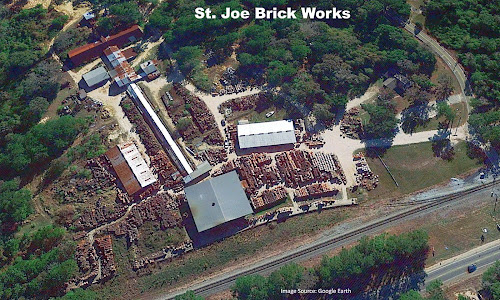 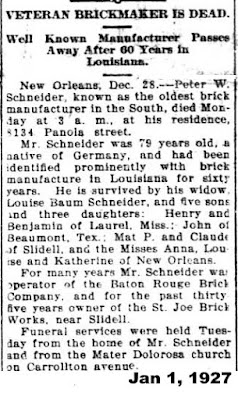