The many fans of Morgus the Magnificent were saddened to learn this week that the genius behind the genius had died. Morgus was known throughout the land as a master scientist, entertainer, and most of all, the living example of the old adage, "If at first you don't succeed, try, try, again." 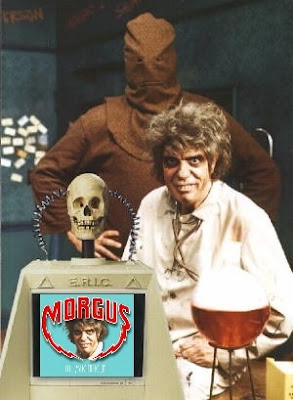 Morgus, Chopsley and Eric
The man behind him, however, was Sid Noel, a local broadcasting industry legend and resident of Covington for years.

Morgus' worn face, dirty lab coat, crooked teeth, and that authority-demanding voice were well-known to generations of New Orleans who grew up with him hosting a weekly horror-movie/science fiction film screening, interspersed with segments of his latest scientific experiment, all for the good of mankind. Saturday night belonged to Morgus, along with Frankenstein's monster, Dracula, the Werewolf and any number of other scary denizens of the dark. 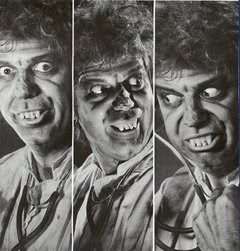 Momus Alexander Morgus was a character created in the late1950's by Noel, a.k.a. Sidney Noel Rideau. He died this week at the age of 90, still a cult hero to thousands upon thousands of television watchers across the nation. Noel portrayed the slightly wacky but good-hearted scientist for more than 50 years.

Once in an interview Noel said that he based the motivations of Dr. Morgus on that famous classic literature figure Don Quixote, who tilted at windmills to fight for the good in the world.

The character of Morgus was always on the leading edge of science, each week coming up with a new gadget, concept or chemical formula to advance mankind. Even though he often failed to succeed at his goal, he kept trying. It was a lesson that many New Orleans teenagers took to heart. 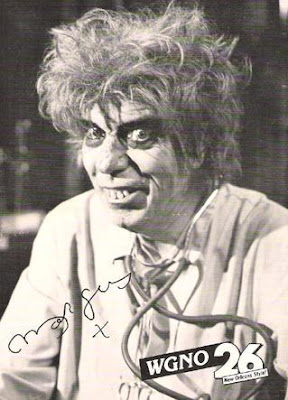 In addition to his weekly horror movie hosting duties, he had a weekday weather show for a few years, and also starred in his own movie: The Wacky World of Dr. Morgus. Filmed in and around New Orleans, it brought the exploits of the Magnificent one to the big screen.

He left New Orleans for a few years to provide television viewers in the Detroit area with his special brand of madness, but came back to the Crescent City in the 1970's. Thanks to a devoted fanbase, the character kept returning with new shows, personal appearances, and celebrity endorsements, entertaining a new generation of fans with each outing. He went on to appear on different television stations in the New Orleans region, and even went into national syndication with reruns, capturing a greater audience of diehard fans.

A Morgus episode featuring a do-it-yourself home nuclear power plant. Click on the "play triangle" to view the video.

My sister Bonnie took part in a special contest centered around Morgus at Pontchartrain Beach in the late-1950's. It was a "Find a Girlfriend For Morgus" contest, and my sister dressed up as the Mummy. She didn't win, but it was a lot of fun, and we did get to see Morgus on stage with all the beautiful (?) contestants.

Moving beyond his Morgus character, Noel's educational efforts included several projects promoting the use of story-telling for young children, a children's book of fables, personal school visits, and helping raise funds for area non-profit organizations including the Audubon Zoo and WYES educational television. His "Uncle Noel's Fun Fables" book and other works sought to help children develop their own ethical values and improve their outlooks in life.

Fans were thrilled last year when Noel took to the stage at the Orpheum Theater for a one-man show to talk about Morgus, his inspirations and aspirations, as well as Noel's long and distinguished career in broadcasting. The event was actually a fund-raiser for the state Alzheimers support organization.

Noel was a resident of the Covington area for years with many friends throughout St. Tammany Parish. Warren Salles, owner of the Star Theater, was one of those friends and Morgus appeared on stage at the Star during the showing of his "Wacky World" movie. Even Chopsley was in attendance at the movie showing.

Noel's obituary asked that in lieu of flowers that donations be sent instead to the Northshore Humane Society and other humane societies throughout the region.

Excerpts from his obituary information:

"Sidney Noel Rideau passed away on August 27 at the age of 90. Sid was born in New Orleans on Christmas day, 1929. He graduated from Alcee Fortier High School. During the Korean War, he served 8 years, honorably, in the U.S. Navy Reserve.

"From the 1950s, Sid's professional name is fondly remembered as Sid Noel, the host of WWL radio's morning Dawnbusters program, which replaced the original Dawnbusters live studio orchestra, hosted by Henry Dupre. Earlier, while attending Loyola University in communications studies, Sid's creative faculty was already on display. As master of ceremonies of the music department's Campus Capers, he led the college's charity entertainment group that visited hospitals and nursing homes throughout the region. In 1957, Loyola University acquired the license for Channel 4 Television station (WWL-TV).

"In January, 1959, with his identity kept secret, Sid created and became the mad but hilarious scientist Dr. Momus Alexander Morgus the Magnificent, whose quixotic, scientific experiments caused a sensation as host of WWL-TV's Saturday night movies. The character's popularity was overwhelming, and continued on and off various television stations, countrywide, for over half a century. 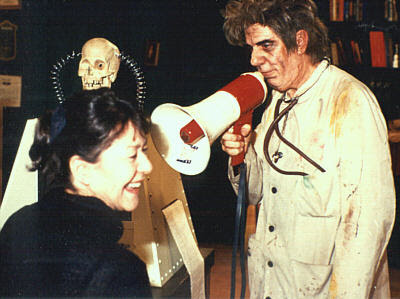 "Throughout the years, Sid generously used the popularity of the Morgus character to raise funds for local charities, civic causes, and WYES-TV auctions. In between, he had other projects that kept him busy in New York, Detroit and New Orleans. He wrote, produced and hosted over 500 television programs, 180 in syndication.

"Beyond radio and television, Sid was a storyteller. Fables were his teaching tools. He patented and manufactured what may be the first "fable-telling" attraction called The Story Castle. From telephones attached, children listened to The Castle's audio stories that spread joy and bits of moral education in shopping malls throughout the United States, and in Canada.

"In the early 1990s, Sid turned his interest toward the growing violence and disciplinary problems in schools throughout the country and at a time, character education became an initiative with educators. As S. Noel Rideau, he authored and published a K-5 reading program titled Uncle Noel's Fun Fables, which got parents involved in reading with their children. The program was featured on the NBC Nightly News with Tom Brokaw.

"Sid also made school visits with his live presentation Storytelling for Character. In 1993, he was invited into the newly organized Character Education Partnership, Inc. in Washington, D.C. In addition, he was a lifetime member of The Storytelling Network.

"At the beginning of the 21st century, he began developing, on the Internet, a K-12, "ethics for kids" reading program as a free supplementary resource for schools. The 52 original stories titled "Fables to Grow On" were incorporated into what became the Internet Story Club of America, Inc. Co-founded and hosted by The New Orleans Public Library, it became an independent, 501c(3) non-profit charity. It serves all ages on the Web at: InternetStoryClub.org."