In the fall of 1955, one of Mandeville's most respected citizens, Dr. Ruffin Paine, celebrated his 90th birthday party with a huge gathering on the Mandeville lakefront. The gathering was huge because people had come from far and wide to help him celebrate his birthday, but this wasn't an ordinary gathering. It was the people that he had helped come into this world: he had delivered all of them as babies throughout his medical career serving the residents of Mandeville. 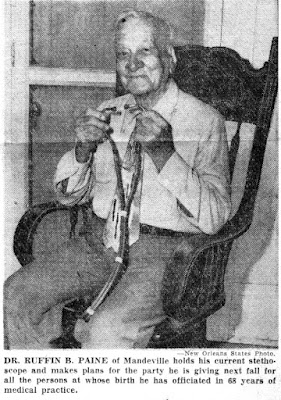 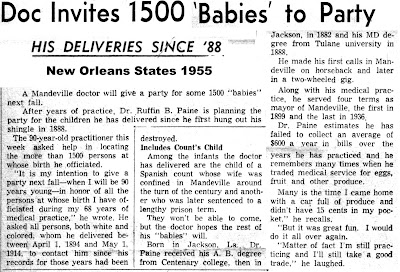 On November 27, 1955, the Dixie Roto Magazine ran a great article, with pictures, of the special occasion, with feature writer Mary Frances Morgan providing the details and A.J. Tudury providing the photographs.  Here are the article and pictures, just click on them to make them larger and more readable. 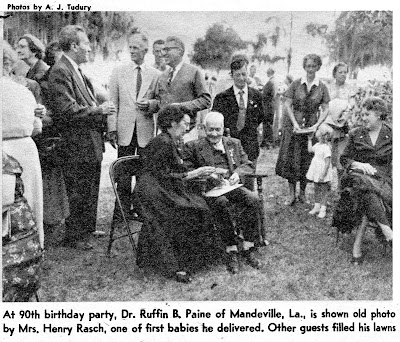 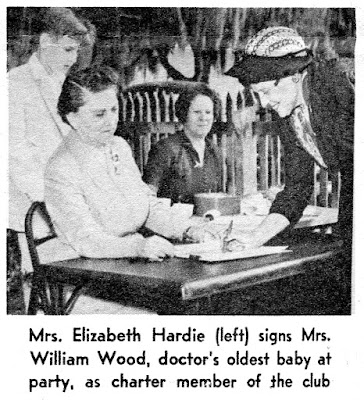 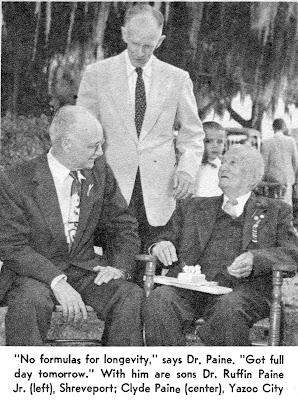 St. Tammany's Stork Club
By Mary Frances Morgan
Dixie Roto Magazine - Nov. 27, 1955
Membership is open in this group that has 1800 on its rolls, all brought into the world by Dr. Ruffin Paine
"DON'T KNOW THE EXACT number of my babies," the sprightly old gentleman beamed affectionately. "My records for 20 years were destroyed by fire in 1914. But between 1800 and 2000 would be a conserva­tive estimate."
The setting was a gracious lakefront home in Mandeville, La. The occasion was Dr. Ruffin B. Paine's way of celebrating his 90th birthday, by holding open house in honor of the babies he brought into the world.
Babies of all ages swarmed happily about to congratulate the man who first congratu­lated their mothers. There were a lot of members for this doctor's private Stork Club."Planned to have this party on my 100th birthday." the doctor confided, "but got to figuring I might as well give it while I'm still young enough to be in on the fun.
"Besides," he added with a twinkle, "if I didn't hurry it up, old rocking chair might get some of my babies meanwhile. See that one over there—she's my oldest baby here today, born 61 years ago."
He pointed to Mrs. Henry Rasch of Mande­ville. Mrs. Rasch conceded the honor to Winnie Davis (Mrs. William) Wood, born a month earlier.
Spilling grandchildren off her lap, Mrs. Wood nostalgically recalled the years at the turn of the century when young Dr. Paine was making his rounds by horseback along the swamp cowtrails linking Mandeville, Abita, Bonfouca, Lacombe and Madisonville.
The doctor chuckled. "Guess I was some­thing to see, then. Used to wear a big sombrero with mosquito netting down to my shoulders and hip boots to help me help my horse whenever the road took a notion to lose itself in the mud."
The doctor recalled the night he arrived at Lacombe to find a mother nervously awaiting the stork. The doctor suggested she join him in Singing "Auld Lang Syne." The third chorus was joined by a lusty, yelling infant, Memnon Woods, now a design engi­neer for 325-mile-an-hour airplanes.
Mrs. W. H. Davis Sr. of Lacombe was the blue ribbon mother present; Dr. Paine deliv­ered all eight of her now-grown children.
BUT BABIES were only a part of Dr. Paine's colorful life. He successfully managed varied careers as a school teacher, United States deputy surveyor, pharmacist, Sunday school teacher, mayor and doctor. He was honored recently by Centenary college of Shreveport as its youngest ever to graduate (he was 15) and its oldest living alumnus. He was married to Ida Jane Welden of Leesville, La., in 1887, and the following year was graduated from Tulane medical school.
He founded the first drug store in Mandeville, established the first Protestant Sunday school there and got the first telephone. He and his wife (now deceased) had six children.
Unperturbed by the avalanche of adulation for him, Dr. Paine watched his newer babies bounce on his knees, and spill ice cream on his charcoal-striped trousers. Michael Smith, 7, of Madisonville, was accompanied by his dad, Sterling Smith, one of a sweepstakes family of six brothers and sisters ushered into the world by Dr. Paine.
Some, like Mrs. Rasch, told how they got their nicknames from the doctor. She is known as "Darling" because Dr. Paine ex­claimed to her mother, "It's a girl, and she's a darling!"
The doctor's family clustered around him—daughters Ella, Frances and Marian, and his sons and their wives, Dr. ("Little Doc" for his boyhood habit of shadowing his father wherever he went) and Mrs. Ruffin Paine Jr. of Shreveport and Mr. and Mrs. Clyde Paine of Yazoo City, Miss., plus six grand­children and 10 great-grandchildren.
Ella, once librarian at Covington High but now retired, recalled:"He might arrive home at any hour, with no money in his pockets," Ella said. "But invariably there was a pig squealing in the buggy or a couple of hens clucking away . . ."
"Never turned down a good trade," her fa­ther said crisply.
"I remember once I delivered- with a shot­gun leveled at me," he reminisced. "The girl's father refused to believe the reason for her urgent distress. When I informed him tactfully that, with or without the benefit of clergy, his daughter was about to present him with a grandchild, he hit the ceiling.
"He gave me exactly 15 minutes to prove I was right or eat my words, seasoned with buckshot. Fifteen minutes later, almost to the second, the argument was settled by a baby that fitted neatly into a shoebox."