One of  Covington's most prolific and appreciated artists is Suzanne King, not only for her skill and stylish technique, but also for her variety of work for a number of community organizations. The ChefSoiree, the St. Tammany Parish Fair Association, the Covington Heritage Foundation, and countless others have turned to her for special projects.

The St. Tammany Art Association has exhibited her mixed media works, and she was written up in the March 2015 issue of Inside Northside Magazine, as the artist who created the poster for that year's ChefSoiree event. CLICK HERE to read that article.

Her longtime devotion to producing award-winning fair posters is well-known, and in 2013  she created the memory-saturated Covington Bicentennial Poster.

Some of her fair posters:The first poster on the left, with the barrel racing theme, won first place statewide at the Louisiana Association of Fairs and Festivals annual meeting. Click on the images to make them larger. 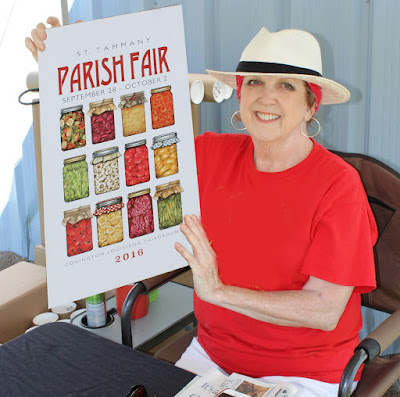 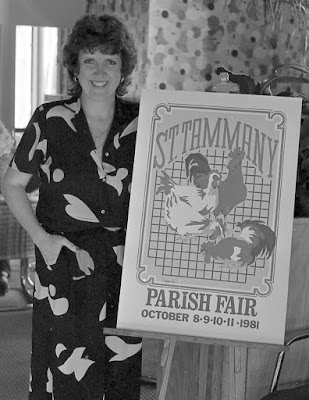 Even as far back as 1981, she was doing posters for the fair association. 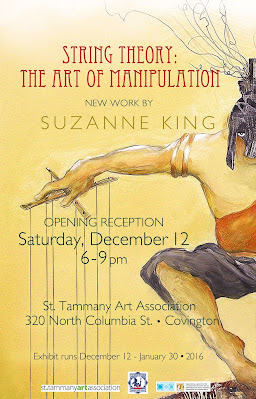 In 2015 her exhibit at the St. Tammany Art Association explored String Theory: The Art of Manipulation.
Here are a few paragraphs from her biographical handout:
A native of Covington, Louisiana, Suzanne King is mixed media artist and a 1967 graduate of Southeastern Louisiana College (now University). She worked for Shell Oil's Graphics Department in New Orleans and Houston for 24 years, and those elements are evident in much of her work.

From 1992-95, Suzanne taught art at the expatriate school in Shekou, People's Republic of China. After traveling to many fascinating places in the world during the 1990s and exploring other art forms, she has returned to drawing and mixed media/collage/assemblage pieces combined with elements of graphics, a favorite form of artistic expression.

A solo show at the St. Tammany Art Association was a highlight of 2015, after which she completed illustrations for two children's books for local authors: The Mystery of the Missing Smile by Carroll Devine and New Orleans - 300 and Counting.... by Alice Couvillon and Elizabeth Moore. 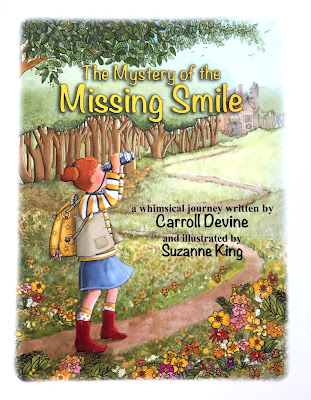 She has also created several posters for many local and regional events, including Playmakers Theater, Covington's Bicentennial poster in 2013, the 2015 Chef Soirée poster, and St. Tammany Parish Fair posters in 1980-84 and 2013-2019.
Her 2013 Covington Bicentennial Poster was a labor of love and loved by all who see it. 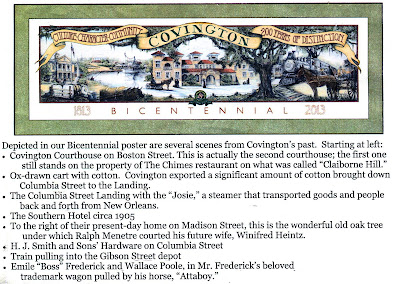 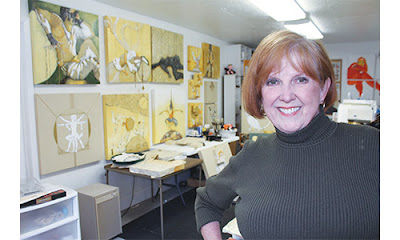 Here are several excerpts from that article:

"King is unquestionably recognized as one of the top artists in St. Tammany Parish and has been exhibiting her extraordinary work locally for years through many different outlets. Describing herself as a “mixed media artist, she delights locals who have enjoyed her work for many years.

"King said she has always enjoyed the opportunity to use her art to exhibit many different things in surprisingly interesting ways. “I like learning and I see beauty and art in things that many people would never notice,” she said. “I noticed a birds nest the other day and was fascinated to see how the bird created it. I saw a dead tree recently and thought it was beautiful when someone else didn’t see anything special about it.

“I have always looked at things differently, but I guess that’s what most artists do and that’s where the creative side comes through,” she added.

"King has been a lifelong resident of the Covington area, graduating from Covington High in 1963 and doing the usual things in school that predicted a career in art.

Drawing has always been King’s strong suit, Chiri wrote. “I’ve never stopped learning–that is what I enjoy in life,” she said. “I took etching classes at Tulane when I worked at Shell, I love photography and have worked at that, I love doing house renderings and I even learned guitar and sign language.

Back in St. Tammany Parish in 1995 she has spent the past 20 years becoming very involved in the community here, supporting numerous charitable events and organizations through her work. She was among the founding members of the Covington Business Association and continually finding new ways to draw and display her work, even becoming the artist who draws the pictures on the pizza boxes for Covington’s “Pizza Man.”

“I’m sure a lot of people will be surprised that I’m the one who does the Pizza Man box art,” she added with a smile. “I enjoy it since it’s one more way to do something with my art. As I said, I love discovering new things to work with,” she concluded. 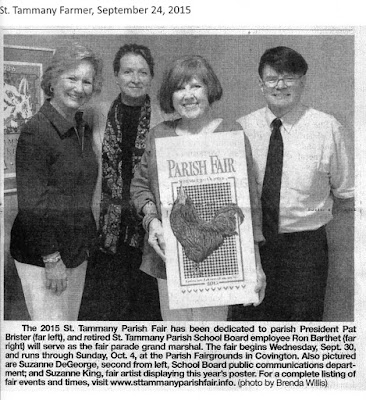 CLICK HERE to view her artwork on display at the St. Tammany Art Association