Covington's Ted Talley, who now lives in Bentonville, Arkansas, recently shared this story about his mother's piano, a family heirloom made even more special by some of the people who have played it over the years. He wrote up the story for a newspaper column back home, and we are privileged to bring it to our Tammany Family readers with his permission.

Talley recently came back to Covington to retrieve his late mother's piano to bring it back with him and give it a new place of honor in his own home.

"All Southern families have stories to share; and this one begins last century in the midst of the Cold War," Talley recently wrote. "In April 1958 young Van Cliburn gained instant celebrity when he won the first Tchaikovsky Piano Competition in Moscow. He confounded the politburo — a Russian was supposed to win.

"Returning to a New York ticker tape parade and a Time magazine cover declaring him the Texan who conquered Russia, Cliburn was nabbed by his birth state's largest orchestra, the New Orleans Philharmonic, for a concert that November," Talley went on to say. The Talley family was unable to attend that concert, but fate played a strange hand in the year to come.

The next April his parents decided they needed a new piano, Talley explained. "They loaded us into our two-toned Mercury with the push-button transmission and drove across Lake Pontchartrain to Werlein's, the venerable music store on New Orleans' famed Canal Street. The showroom was filled with Steinways the size of cars with hoods raised but no tailfins."

After playing a few of the pianos, his mother told the salesman, "These are just too big for our living room."

"I have just the piano," the salesman said. Talley told how the salesman ushered them into a small practice room containing an upright Steinway. "With a dark walnut stain and fluted wooden support columns topped with pineapple-like finials, it was unique," Talley said. "My older sister Carolyn played first. Mother followed with a church offertory excerpt. She lifted hands from the keys and cast her vote: "This piano has a beautiful tone."

The salesman responded, "Then, Mrs. Talley, you agree with Van Cliburn." 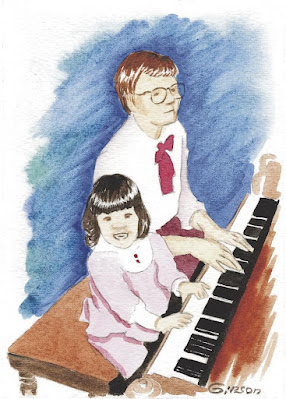 To their amazement, the salesman told them that the famed Van Cliburn had rehearsed in the very room on the very same piano while the concert grand was moved from the store to the Municipal Auditorium for his performance. In fact, he had commented on the upright's fine musical qualities to store personnel.

The Talleys purchased the piano, brought it home to Covington, and enjoyed playing it as well as sharing the story of its heritage.

"Two years later and with a fine piano to offer, Mother volunteered to host my sister's piano teacher and her annual recital in our living room. One of several other students to perform was Mary Pratt Percy, eldest daughter of noted novelist and essayist Walker Percy. The Percys were acquaintances from a few blocks away," Talley continued.

"As the day of the recital neared, Mother was nervous that this famous writer would be visiting her home. Daddy paid no mind. In his view, "Dr. Percy," as locals called him, would be just another father coming to hear a child play, same as Mr. Brunning, the electrical contractor, or Mr. Kohnke, our druggist," Tally recalled.

Warehouse men recruited from our family's feed store relocated the living room furniture; a grain delivery truck was dispatched to borrow folding chairs from the church. The venue was set. "But late that night Daddy, struck with awful gastric distress, was rushed by ambulance to the hospital. An appendectomy ensued," Talley said.

The Recital Goes On

"As the cars of recital families filled our narrow street the next afternoon, neighbors who knew of the medical emergency became alarmed (about the number of cars) and worried that Daddy had died and First Baptist folk were arriving with condolences. One lady down the street rang the doorbell offering to organize funeral day food," Talley remarked. His father came through the operation all right, but he missed the recital.

"Nevertheless, the recital was a success, followed with cake and punch in the dining room and a write-up in the society section of the local weekly. Daddy would read about it when he had recovered,." Talley went on to say. "I also took lessons a year or so and endured one recital, but quit in favor of the trumpet and marching band," he explained.

If he does finish learning how to play the piano one day, he feels he might channel inspiration from fingers pressed upon these classic ivories decades ago. "I reference not those of Van Cliburn, celebrated concert artist of Fort Worth, Texas. Rather, I'll recall the graceful hands of Evelyn Simpson Talley, feed mill matriarch and accomplished church musician of Covington, Louisiana," he concluded. 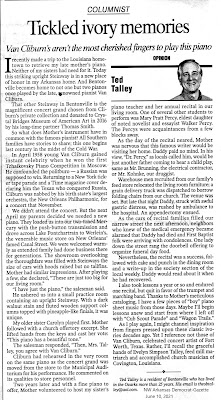 The 1961 article about the piano recital and who was involved.
The piano students who took part in the recital were the following: 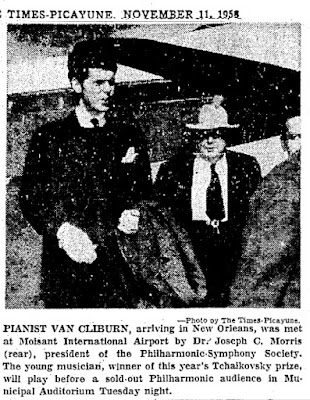 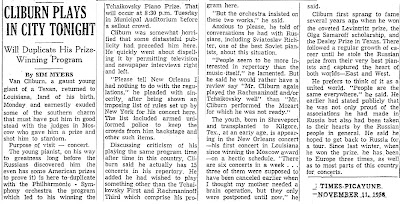