For a brief time, the Covington area had a military cantonment on the Little Bogue Falaya River, just a few miles upriver from Claiborne Hill. It was located where the "Old Military Road" branches off and heads up to the Bogue Chitto River.

Don Sharp in his research says the following:

In 1805 a crossing over the Bogue Falaya River at Covington was located on land owned by Massey West Baker, and a wooden bridge was built at the site. Things began happening quickly in that area as new settlers came in.

The military cantonment was established in 1811  with the cooperation of Governor Claiborne of Louisiana and Governor David Holmes of Mississippi Territory. Lt. Colonel Leonard Covington of the U. S Army assigned the 3rd Regiment stationed in the Mississippi Territory for the job. Barracks for the troops and housing for Officers were built five miles from the Bogue Falaya Fork on the road to the settlements northeast on the Bogue Chitto River. 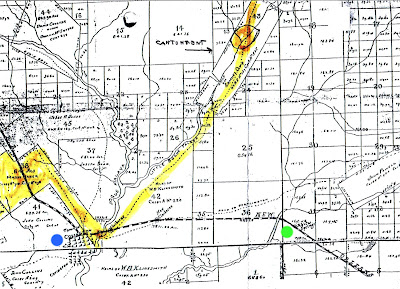 Click on the image to make it larger.
Covington is at the blue dot in the lower left corner, the location of the abandoned cantonment is the red mark at the top of the map, and Abita Springs is located at the green dot, lower right. The New Orleans railway line is located across the bottom (although it was not there at the time of the cantonment.) Of interest are the dotted lines, showing the roads to Pearlington (Ms.) at bottom, and the road to Bogue Chitto (Military Road La. Hwy. 21)

A declaration of War with Great Britain was received in July, 1812, and the Military Cantonment on the road between the Bogue Falaya and Bogue Chitto Rivers was closed because the troops were needed elsewhere. The Detachment of the 3rd Regiment stationed at the Cantonment was recalled back to Mississippi Territory.

In 1813 Governor Claiborne wrote to Governor Holmes of the Mississippi Territory and tells Holmes that since the Cantonment was closed on the Little Bogue Falaya roving bands of Choctaws have become increasingly hostile along the area of the Bogue Chitto River.

On November 29, 1814, General Jackson and five aides, including Major Howell Tatum, who kept a dairy, came down the Military Road from the Bogue Chitto River settlements. They passed the abandoned Cantonment at the crossing of the Little Bogue Falaya and entered the newly dedicated town of Wharton.

It was Samuel Ott who had the saw mill next to the "old cantonment" that was mentioned in Howell Tatum's diary, and Ott's property is clearly marked on the  Tobin map shown above.

A hundred years later, in 1916, there was a small group of Louisiana Marines stationed at Demourelle's on the Bogue Falaya River a few miles south of Covington. 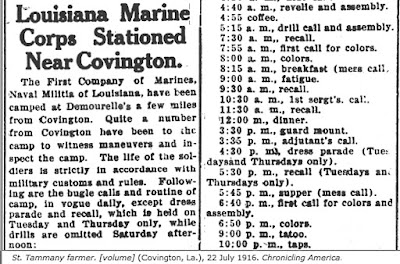 The Early Settlement of the Tchefuncte River Corridor

The Timeline Along the Tchefuncte River Corridor