The Life and Death of the New Camelia Lake Steamer

The newspaper article appearing below was published in a New Orleans newspaper on Sunday, January 18, 1920. It tells the history of the New Camelia lake steamer, from its beginnings in a shipyard in Delaware to its sad and ignoble end at a shipyard in Madisonville. In between, it served many purposes, but the best remembered were its days as an excursion vessel bringing people from New Orleans to St. Tammany Parish and back.

There were music, fun and dancing during her hey day, plying the waters of Lake Pontchartrain and along the Gulf Coast, but near the end of her existence, she served as a riverside rundown rooming house for area shipyard workers. Here's the story from beginning to end.

New Camelia, After the Remarkable Career of Three-quarters of a Century, Resting on Bottom of Beautiful River that So Often Sheltered Her

The New Camelia is gone forever. After nearly three-quarters of a century of usefulness she lies in a waterly grave at the bottom of the Tchefuncta River at Madisonville, with the purple water hyacinths and flags marking her resting place. Her passing writes "finis" at the end of a long career closely identified with that of New Orleans and the Gulf Coast and lakeshore towns.

"So she's gone, is she? At the bottom of the river. Well..." On the sunny doorstep of his son's home on North Claiborne St., Captain Jim Dandie, for forty years mate and captain aboard the Camelia, sighed and nodded his head with the quiet philosophy of 83 years when he learned of the old steamer's end.

"Well, she went down quiet and easy in fresh water, didn't she?  I never thought of her going like that, somehow. You see, I was with her 40 years when she made the lake trips, and the trip all along the Gulf Coast clear to Mobile and Pensacola before the over-the-lake railroads were built. I've seen her buck into the teeth of a gale like a bull dog and hang on to her course when the wind was blowing the water out of Pontchartrain.

"I always sort of imagined her going down in one last big fight with the wind. A grand old boat! We used to brag she had the prettiest hull of any steamer in this part of the country. And she's at the bottom of the Tchefuncta, you say?"

The hull that aroused the pride of the boat's navigators was laid in Delaware, in the year 1847, it is said. And when it made its first contact with the waters of Pontchartrain it bore the name of Zephyr.

During the Civil War it had the important duty of acting as dispatch boat for General Ben Butler, federal commander in occupation of the captured city of New Orleans. There are a few old residents today who can recall this enemy boat whipping into port at Spanish Fort at a speed considered remarkable at that time.

It was not until after the Zephyr had been demobilized from military duty and the blue uniforms had given way to tailored grey ones again, that she passed from the hands of the government and became definitely identified with New Orleans for the rest of her days.

She was purchased by August Rome, New Orleans cotton merchant, who foresaw the need for communications between the city and outlying parts, struggling through reconstruction after the war. Captain John Beadman, afterward of the tug Samson, took charge of the steamer, rechristened with the "strictly Southern" name of "The Camelia."

She began her triumphant cruises along the Gulf Coast as far as Pensacola and back, and continued this after Mr. Rome rebuilt her on the same hull and called her the "New Camelia."

From that time on, the steamer was an important figure in travel, commerce and pleasure of the city. She carried cotton and merchandise, and in summer her decks fluttered with the veils and parasols of excursionists. Whole families would board the boat at New Orleans for some lake or Gulf towns, accompanied by servants laden with baggage of every description. 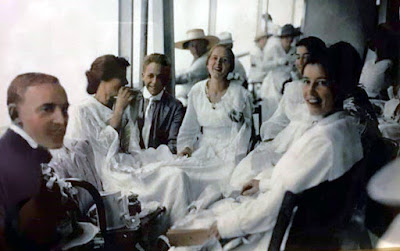 Passengers on the New Camelia enjoy visiting with friends

Grouped on the shady side of the steamer, they would pass the warm mornings and afternoons, but when dusk fell there would be a general flutter of anticipation as deck hands began clearing away the coils of rope and chairs. Negroes with banjos and guitars would shuffle up from the lower deck, grinning at the applause that greeted them. Then the dancing would begin on the smooth deck, swept by  the cool salt breeze, and the Camelia would push on through the darkness, twinkling with lights and sending the echo of music and laughter across the water.

In the later days, when the New Camelia made only the daily trip across the lake, pausing at Mandeville and then pushing on up the river to Madisonville, she still made an imposing sight as she came swooping in at evening, white and stately against the blue.

At Mandeville, there would be a crowd of summer vacationists at the end of the long pier, waving a greeting to the guests and the commuting husbands just out of a hot and busy city. At the prow of the vessel would stand the captain -- one of a long line, be he Captain Dandie himself, Captain Blakesley, Captain Weaver, or Captain Hanover.

Before the railroad was laid to Covington, the mail bag would be dumped over to the pier; baskets and trunks and packages would be handed down in rapid succession. In recent years there was always a string of automobiles that must be backed carefully along the gangplanks to the wharf. Almost every automobile in the Florida parishes made the trip from New Orleans on the New Camelia to save the long trip by way of Baton Rouge. 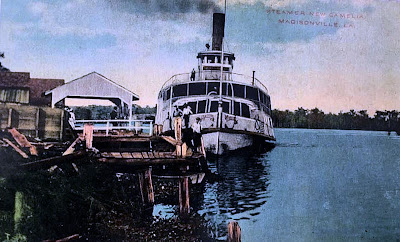 Then the steamer would turn out slowly and go on down the shore to turn into the Tchefuncta River just as dark fell. This was the part of the journey over which passengers exclaimed and talked of long afterward. It was a magic journey, up the broad stream, over which, in spite of its width, the branches of the trees almost met. In summer the way was edged with water hyacinths and purple flag lillies and pale yellow water lillies. In winter the woods on each side would be misty gray, with here and there, a tree flaming with red yupon berries.

During the latter part of the New Camelia's life she belonged in turn to W. G. Coyle & Co. and recently to the Louisiana Steamship Company. Each owner, in respect of the old craft's excellent former services, made repairs and renovations.

But the day came at last when for the New Camelia, the "new" now a mockery of her former glory, made her last journey up the Tchefuncta. She went with the slow gait of old age and dropped anchor for the last time among the water plants near the Madisonville loading wharf.

The sleepy old town had begun to hum with life sprung up around the Jahncke Shipbuilding plant, and the Camelia looked her age among the great new ships in various stages of construction about her. She had come in from her life of gaiety and freedom to the fate that awaits many a former belle when age comes on. She began "keeping boarders."

Used As A Boarding House

The broad decks and the staterooms of the steamer provided an excellent solution for the housing problem in Madisonville, made acute by the influx of shipyard workers. Securely tied up to the bank, the New Camelia took on the aspect of one of the rooming houses in the more shabby city streets.

From her deck where feet had danced to the music of banjos or sturdy sailors had withstood the sweep of high seas, flannel shirts and dishtowels flapped from a clothesline. In the cabin where the federal commander had prepared the military dispatches, a stout landlady  swayed in a rocking chair and did tatting during the afternoon. On the lower deck a few chickens clucked in a wire enclosure.

But recently, even this motley crew left the old boat, when the word went around that she was becoming too weak even for this dull existence. And one day, she slipped gradually down beneath the water. 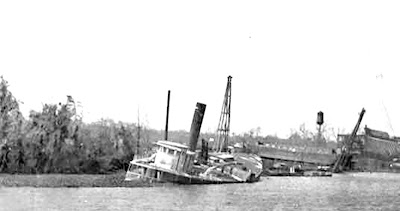 The Final Resting Place of the New Camilia 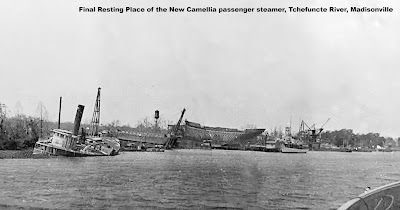 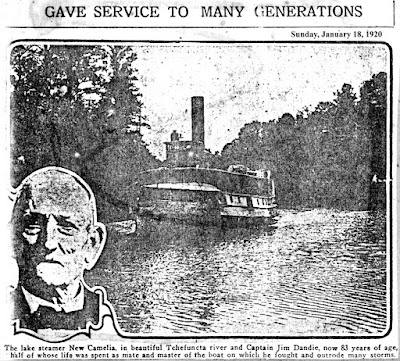 For more information about the Camelia, CLICK HERE.
For a collection of photographs of the New Camelia from Denis Bechac,
CLICK HERE 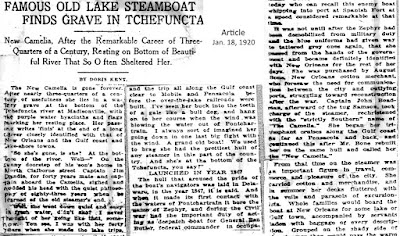