The Mandeville Union Protestant Church was established in 1876. Located at 217 Carroll Street in Mandeville, it is currently known as the Mandeville Bible Church. 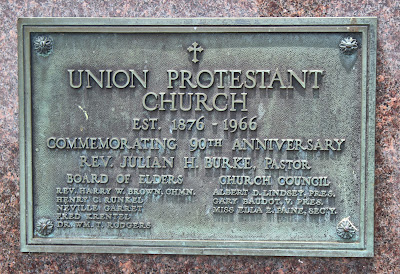 "Mandeville Bible Church has its roots in the Mandeville Union Protestant Society, which began in 1876 with the hope of being a source of strength, unity and inspiration to the people of Mandeville, Louisiana. The society was born out of necessity, because at that time there was no place for non-Catholics to worship.

On February 28, 1876, several leaders in the Mandeville community organized and obtained a 90-year charter for the Mandeville Protestant Church Society which provided a place of worship for people from any Protestant denomination. On May 6, 1876, the board authorized the purchase of the property on Carroll Street for one hundred dollars. This is where the church building stands today. The community of Mandeville, including blacks and whites, and those of the Protestant, Jewish, and Catholic faiths, contributed money, materials, and labor to build the church building. 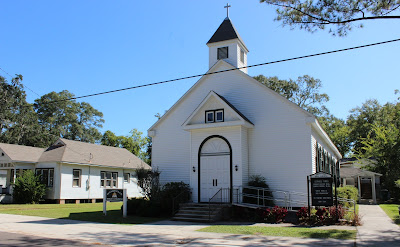 The belfry and bell, which are still in use today, were installed in 1886. Since church growth was hampered by a lack of proper church facilities, an education building/fellowship hall was approved in May, 1953, and completed in April, 1954, for the cost of $25,000. Another major addition to the church came in 1978, when the church building was extended by forty feet, and a choir loft and a baptismal pool were built for the cost of $53,000. God provided for the debt to be paid in three years. In response to repeated flooding of the Fellowship Hall over the years due to tropical storms, in 2013, the church members voted to have the building raised. A lift was added in 2014 to assist those unable to navigate the stairs into the building.

In the early years, the church building was used by different denominations at various times. Because the people had to wait until the minister of their preferred denomination came to Mandeville, weddings and baptisms often had to be delayed for weeks.

No fewer than 54 ministers from Covington and the surrounding towns, representing five denominations, faithfully served the church as part-time ministers until 1955, when the first full-time resident minister, Rev. Joseph K. Pinter, was called.

Following is a list of the full-time pastors from 1955 to the present:

In 1893, an attempt was made to organize a Sunday School, but met with little success. In March, 1894, Dr. R.B. Paine, a medical doctor, came to Mandeville, and was instrumental in establishing a successful Sunday School program,.and in soliciting contributions to pay the visiting ministers.. 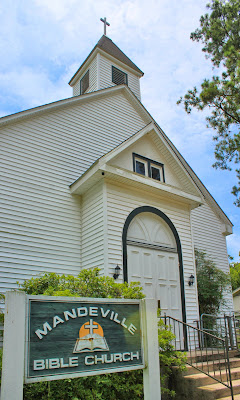 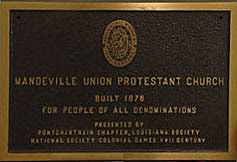