A combination aircraft show and car show took place at St. Tammany Regional Airport just east of Abita Springs Saturday, October 29, 2016. Dozens of show cars were on exhibit, along with a large number of planes and Auto Gyro gyrocopters, at the fifth annual "Wings and Wheels" event put on to promote public awareness of general aviation and bring classic aircraft together with classic cars.

The family-oriented event featured informational booths about the local St. Tammany Composite Civil Air Patrol and Pilots for Patients.  Airplane rides were available from Air Reldan, as were rides on the two-seater autogyros provided by Auto Gyro of Louisiana. 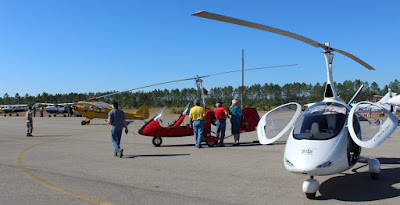 A ceremonial flag jump was planned by members of Gold Coast Skydivers.  Raffle tickets were available for a variety of prizes of aviation and car products and services, and food and drink for the occasion were provided by Abita Bar-be-que. Educational displays included information on ADSB by Auric Avionics/Garmin, MSY Controllers, and CNC Custom Wood Working. 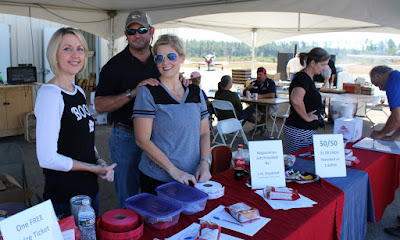 Daniel Oppenheim, coordinator of the Wings & Wheels, said the event was sponsored by the St. Tammany T Hangar Pilots Association, Air Reldan (the fixed based operator at St. Tammany Regional Airport), and the Parish of St. Tammany. The local Civil Air Patrol has 43 members, and there are 10 members in the T Hanger Group. 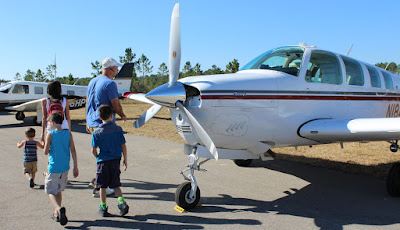 The Wings & Wheels featured exhibits on the many facets of general aviation, which focuses on small aircraft that carry four to six people, aircraft considered experimental, and even homebuilt aircraft, anything that is not airliners or military. When asked about the growing popularity of general aviation, Oppenheim noted that the interest in experimental aircraft was growing by leaps and bounds primarily because it is easier to get into at a slightly lower cost.

More Photographs Available At Link Below 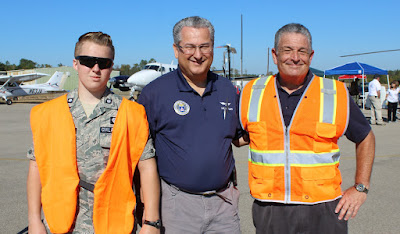 From left to right, Cadet 2nd Lt William Wicker and Major Chris Sturm, both with the Civil Air Patrol, and Daniel Oppenheim, coordinator of the Wings & Wheels.

Civil Air Patrol Cadet 2nd Lt. William Wicker said he had been with the Civil Air Patrol for two years and found it rewarding and educational. "My best friend joined first, and he told me it was all about aviation and learning leadership skills, and I wanted to get involved. I've learned many different skills as a result, and I'm glad I joined.""

The Civil Air Patrol is part of the United States Air Force, and it takes part in search and rescue missions over land and other important activities. The St. Tammany Composite CAP Squadron has been in operation about four or five years, although there was an earlier Civil Air Patrol group some 40 years ago. Overall, the national Civil Air Patrol is 75 years old and has 30,000 members nationwide, just over 500 of those in Louisiana. The Air Force provides aircraft and a van for each squadron, as assigned by the state CAP Wing.

Major Chris Sturm said that the Civil Air Patrol was at one time an auxiliary of the Air Force but was elevated two years ago to being a part of the total force. "We perform 90 percent of all inland search and rescue operations, are sometimes assigned homeland security and DEA counterdrug missions, and work with many different agencies in emergencies. They can call us at anytime."

During the recent flooding in southeast Louisiana, the Civil Air Patrol provided key photographs of the flooded areas that Louisiana disaster response agencies used to allocate resources, Sturm stated. The local group meets weekly for training in leadership skills, character development, emergency services, and aerospace education. "We are continually training," Sturm said. "Going out on practice missions and teaching Cadets how to use radios and direction finding equipment and how to be a part of a search team."

"I've been told by national Civil Air Patrol leaders that the Louisiana Wing uses Cadet members more effectively than many other states. We are relied upon by law enforcement agencies in air searches because we are more efficient dollar wise. It costs us $120 an hour to fly in our fixed wing aircraft versus the $6000 an hour it costs to fly a National Guard helicopter," Sturm noted. "Our job is to find people who need help, radio their location, and then they send out the Army National Guard helicopters to do the job of picking them up. We each do the job we are most efficient at doing."