In June of 1973, motion picture companies were coming to St. Tammany Parish one after another, filming major films with major stars every few months. So much so, in fact, that local chambers of commerce, business people, and even state film promotion agencies started to shine the spotlight on St. Tammany even more.

The unique skills and services needed by movie production people were readily available, and local business people were more than willing to adjust their schedules to make it all happen. Of course, having a population that was eager to work as "extras," some with their own costumes, was an added bonus.

Below is an article I wrote about the newfound fame (and Hollywood luster) that St. Tammany was enjoying at that time. It appeared in the June 24, 1973 edition of the Northlake Sunday News. 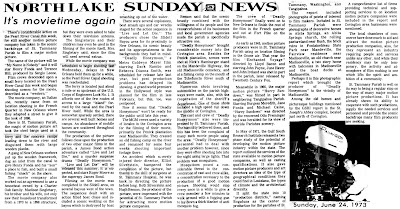 One of the crew members once told me on a movie set that one of the reasons directors, cast and crew love it when they get to come to St. Tammany Parish to make a movie is that, after shooting is done for the day, then New Orleans is only a short drive away with its good times, parties, and night life. That close proximity to New Orleans helped St. Tammany become a Hollywood favorite in more ways than one. 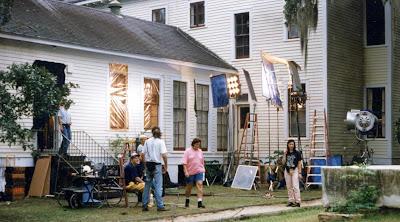 Of course, today, in 2016, movies are being shot on location here in St. Tammany more frequently, not only big studios doing big films but a number of low-budget movies being produced by independent companies. More specialized movie services are also available in St. Tammany now more than ever with several media production companies, corporate film services, make-up, costuming, and lighting providers, not to mention the most important service of all, catering companies that provide meals and beverages on set. Local restaurants have found a new revenue stream by providing that service.

For an almost complete list of films made in St. Tammany Parish over the years, CLICK HERE.


My review of the James Bond film "Live and Let Die" filmed in part in St. Tammany