Slidell and Lacombe: People and Community - 1905 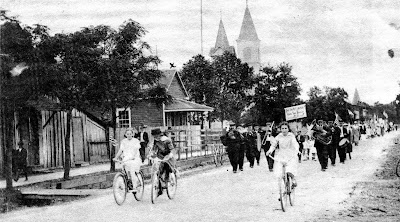 Below are scans and text from photocopies of the several pages spotlighting the Slidell and Lacombe section of the brochure. Click on the images to make them appear larger. 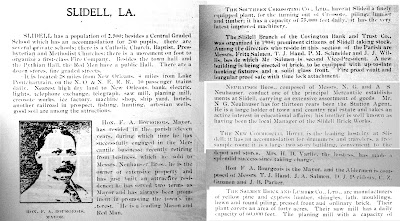 SLIDELL has a population of 2,500; besides a Central Graded School which has an accommodation for 200 pupils, there are several private schools; there is a Catholic Church, Baptist, Presbyterian and Methodist Churches. There is a movement on foot to organize a first-class fire company. Besides the town hall and the Pythian Hall, the Red Men have a public Hall. There are a dozen stores, fine graded streets.
It is located 28 miles from New Orleans, four miles from Lake Pontchartrain on the N.O. & N.E.R.R. with 10 passenger trains daily. Nearest dry land to New Orleans, bank, electric, lights, telephone exchange, telegraph, saw mill, planing mill, ceosote works, ice factory, machine shop, ship yard, hotels, another railroad in prospect, fishing, hunting, artesian wells, good soil are among the attractions.

The Hon. F. A. Bourgeous, Mayor, has resided in the parish eleven years, during which time he has successfully engaged in the Mercantile Business: recently retiring from business, which he sold to Mssrs. Neuhauser Brothers. He is the owner of extensive property and has just built an attractive residence. He has served two terms as Mayor and has always been prominent in promoting the town's interest. He is a leading Mason and Red Man.

The Southern Creosoting Co. , Ltd., have at Slidell a finely equipped plant, for the turning out of Creosote, piling, lumber and timber. It has a capacity of 75,000 feet daily, and it has the very latest improved machinery.

The Slidell Branch of the Covington Bank and Trust Company was organized in 1904: Prominent citizens of Slidell taking stock. Among the directors who reside in this section of the Parish are Messrs. Fritz Salmen, T. J. Hand, P. M. Scheider and J. J. Willis, beside which Mr. Salmen is second Vice President. A new building is being erected of brick, to be equipped with up-to-date banking fixtures and a solid glass front. Fire proof vault and burglar proof safe with time lock attachment.

NEUHAUSER BROS. composed of Messrs. N.G. and A.S. Neuhauser, conduct one of the principal Mercantile establishments at Slidell, carrying an extensive assortment of goods.. Mr. N. G. Neuhauser has for thirteen years been the Station Agent. He is a large holder of town and country real estate and takes an active interest in educational affairs. His brother is well-known as having been the Manager of the Slidell Brick Works.

The NEW COMMERCIAL HOTEL is the leading hostelry at Slidell. It has an accommodation for drummers and travelers, a free sample room. It is a large two story building, convenient to the depot and stores. Mrs. H. D. Varlie, the hostess, has made a splendid success since taking charge.
Hon. F. A. Bourgeois is the Mayor, and the Aldermen are Messrs. T.J. Hand, J.A. Salmen, D.J. Perriloux, C.Z. Guzmen, and J. B. Parker.

The SALMEN BRICK AND LUMBER CO., Ltd, are manufacturers of yellow pine and cypress timber, shingles, lath, mouldings, hewn and round piling, pressed front and ordinary brick. Their plant covers an area of forty acres. Their saw mill has a daily capacity of 60,000 feet. The planing mill with a capacity of 50.000 feet daily, has ten of the latest improved machines. The drying capacity is taken care of in eight up-to-date brick and steel dry kilns. Their brick plant is amongst the finest in the country, with a capacity of a quarter of a million daily. There are two up-to-date pressed brick machines and two building brick machines. The Company operates the Slidell and Bayou Lacombe R.R. a distance of 12 miles.

In line with their handling equipment, they have three immense brick derricks of 200,000 daily capacity, one at the plant, one at the yards on the New Basin, and one on the tug boat "St. Tammany." They own a pine saw mill on the Tickfaw River of 20,000 feet capacity. In connection with their brick plant, the Salmen's operate a steam drive with a capacity of 100 cars of brick.

The Company also owns the largest merchantile establishment in the parish. They received the Bronze Medal at the Louisiana Purchase Exposition for their superior brick. During the Convention of the National Association of Brick Makers at Birmingham, Ala., they paid a visit to this model factory in order to inspect its equipment. The affairs of the corporation are ably directed by Messs. F. Salmen, President; J.A. Salmen, Vice President, and J. Salmen, Secretary and Treasurer. Their New Orleans office is at 712 Common Street. They have immense export and domestic trade in lumber, pilings, etc., and have a large brick business among the Gulf Coast Section. 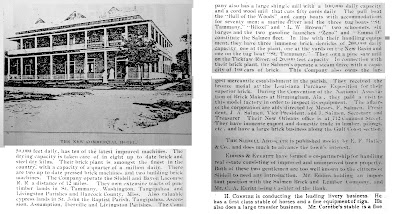 The SLIDELL ADVOCATE is published weekly by E. F. Hailey& Co., and does much to advance the town's interest.

Eddins & Everitt have formed a co-partnership for handling real estate consisting of improved and unimproved town property. Both of these two gentlemen are too well known to the citizens of Slidell to need any introduction. Mr. Eddins holding an important position with the Salmen Brick and Lumber Company, and Mr. C.A. Everitt being Cashier at the Bank.


Messrs. F. S. Pickel and T.J. Hand are proprietors of the leading liquor business in Slidell. They have an extensive wholesale shipping trade. Mr. Hand has for eight years been a prominent member of the town council. He is prominent in fraternal circles. 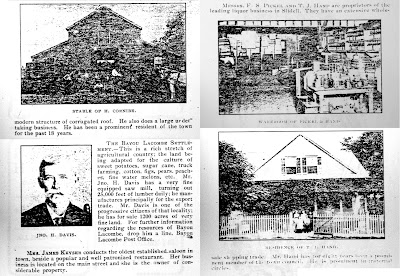 The BAYOU LACOMBE SETTLEMENT. This is a rich stretch of agricultural country;  the land being adapted for the culture of sweet potatoes, sugar cane, truck farming, cotton, figs, pears, peaches, fine water melons, etc. Mr. Jno. H. Davis has a very fine equipped saw mill, turning out 25,000 feet of lumber daily . He manufactures principally for the export trade. Mr. Davis is one of the progressive citizens of that locality. He has for sale 1200 acres of very fine land. For further information regarding the resources of Bayou Lacombe, drop him a line. Bayou Lacombe Post Office.

MRS. JAMES KAYSER conducts the oldest established saloon in town, beside a popular and well patronized restaurant. Her business is located on the main street, and she is the owner of considerable property.

To see more advertisements from this booklet, CLICK HERE.