In 1905 H.P. Bougere started a creamery just off the Bogue Falaya River a few miles north of Covington in a place called "Sans Souci." It was where the Playmakers theater is today. 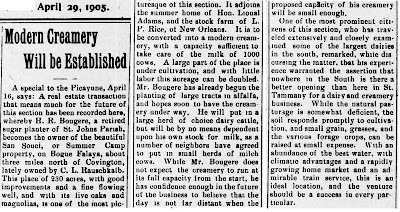 Click on the images to make them larger and more readable 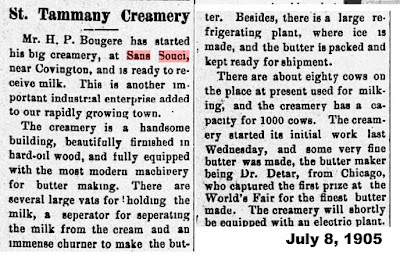 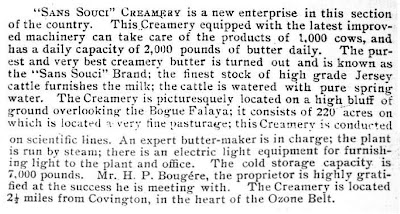 From a 1905 Booklet about the Covington area
Bougere's Son

Horace Lewis Bougere was the eldest son of Mr. and Mrs. H.P. Bougere, who have been prominent residents of Covington for the past four and a half years. He was educated in the public schools and at the Agricultural and Mechanical College at Starksville, Miss., where he obtained a thorough knowledge of the dairy and creamery business.

During the first two years of their residence here, he and his father conducted the San Souci Creamery, located on their beautiful home sight about four miles from Covington. For the past two  years, he assisted his father in the dairy business, until he decided to enter the navy, leaving here only a short time since for the Naval Training Station at San Francisco, where he was fatally stricken with spinal meningitis in the very prime of his life, being only in his twentieth year. 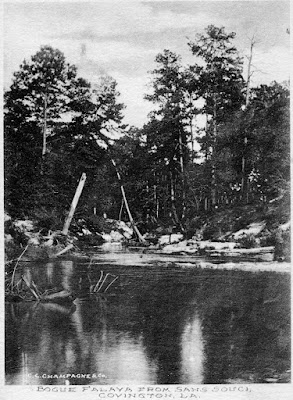 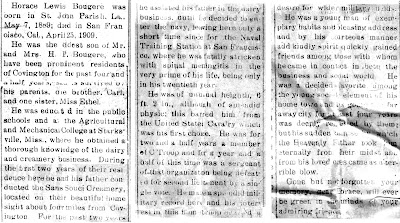