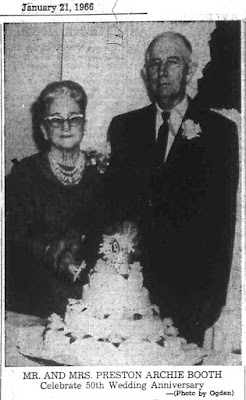 Here's the article that appeared in the newspaper that week. 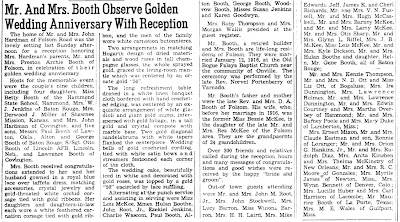 Text from the above article:
Mr. And Mrs. Booth Observe Golden Wedding Anniversary With Reception

The home of Mr. and Mrs. John Hardman of Folsom Road was the lovely setting last Sunday afternoon for a reception honoring Mrs. Hardman's parents, Mr. and Mrs. Preston Archie Booth of Folsom, in celebration of their golden 'wedding anniversary.

Mrs. Booth received congratulations extended to her and her husband gowned in a royal blue lace over taffeta dress, matching accessories, crystal jewelry and gold-throated white orchid corsage tied with gold ribbons. Her daughters and daughters-in-law each wore a white feathered carnation corsage tied with gold ribbon, and the men of the family wore white carnation boutonnieres.

Two arrangements in matching Hogarth design of dried materials and wood roses in tall champagne glasses, the whole sprayed gold, graced the living-room mantle which was centered by an ornate gold "50".

The long refreshment table draped in a white linen banquet cloth bordered with hand crocheted edging, was centered by an exquisite arrangement of white gladioli and giant gold mums, interspersed with gold foliage, in a tall gold and crystal complete with marble base. Two gold diagonal candelabrums with white tapers flanked the centerpiece. Wedding bells of gold crocheted cording, tied with white satin bows a n d streamers festooned each corner of the cloth.

The wedding cake, beautifully iced in white and decorated with gold roses, was topped by a gold "50" encircled by lace ruffling.

Mr. Booth, a retired builder and Mrs. Booth are life-long residents of Folsom. They were married January 12, 1916, at the Old Bogue Falaya Baptist Church near the community of Onville. The ceremony was performed by the late Rev. Norvel Fortenberry of Varnado.

Mr. Booth's father and mother were the late Rev. and Mrs. D. A. Booth of Folsom. His wife, who, before her marriage in 1916, was the former Miss Bessie McKee, is the daughter of the late Mr. and Mrs. Rea McKee of the Folsom area. They are the grandparents of 24 grandchildren.

Over 300 friends and relatives called during the reception hours and many messages of congratulations and good wishes were received by the happy "bride and groom".