Jaunet "Nettie" Pelloat Galatas was one of the most remarkably busy women of the Covington area. Her list of accomplishments, involvements, and recognitions were lengthy, and she made many contributions to the well-being of the community. 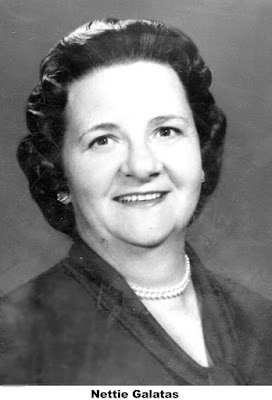 She was president of the Business and Professional Women's Club 1971 to 1972, she was crowned Queen of the Krewe of Kaa Cee in 1994, and in the year 2000, the Covington Chamber of Commerce Auxiliary dedicated their installation banquet to her. 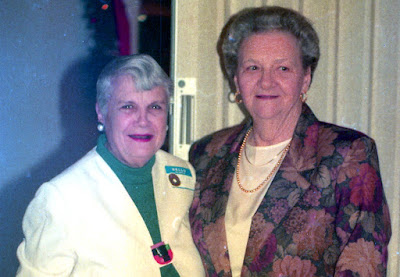 Galatas, at right, with Betty Drury, at a chamber of commerce meeting

"Nettie was a unique individual," said the president of the chamber auxiliary. "Each of us remembers her unfailing good humor, sense of fair play, sense of humor and golden personality."

While she lived in Covington the last 48 years of her life, she always had fond memories of her hometown of Madisonville. In an article by Vera Haik published in 1990, Galatas is quoted as saying, "I love Covington, but there is just something about Madisonville that says 'home.'  I have wonderful memories of my childhood and growing up there - the people who live there are like family."

Her brother Jack was credited for shortening her name from Jaunet to Net, and this became "Nettie" over time, a name that stuck with her the rest of her life.

After attending Madisonville Junior High School, she graduated from Elmer E. Lyon High School in Covington. It is there she met Edwin.  "We were school sweethearts," she told Vera Haik.  For their 50th wedding anniversary in 1990 more than 365 friends gathered to help them celebrate.

Vera Haik's article went on to say that Nettie's high school days were happy times. "Believe it or not, I loved to act and in my senior year I had the lead in our play, 'Smilin' Through' which was performed at the old Majestic Theater in Covington. I also have always liked to sing and my cousin Al Letchworth and I sang in the old St. Catherine's Catholic church for Mass and especially for weddings."

She enrolled in business school after graduating from high school and then went to work for the telephone company in Madisonville, "but only for a short time."

"We brought up our children with a lot of love and togetherness and taught them that if you have faith in God, nothing is impossible," Galatas said.  "My life has always been full of activity, from school days to the present. I have always been a joiner, a volunteer. I have never learned how to say no. I love people and am happy when I am involved."

She was a recipient of the Order of St. Louis Medallion, and an "Outstanding Senior Citizen of St. Peter Church."

Vera Haik concluded her article by noting that Galatas always has a smile for everyone and is interested in everyone and everything.  She told her, "You know, there is an old saying - behind every woman, there is a good man. And I know in my case that is true."

Her husband Edwin Galatas was born in Covington on Dec. 2, 1916, in the family home on New Hampshire Street. He was the son of former St. Tammany Sheriff Walter Galatas. He went to school at St. Peters and graduated from Lyon High School in 1935, where he played football and belonged to the first school boxing team. He played halfback in football and fought as a lightweight.

Vera Haik also wrote an article about him in her Senior Citizens column for the Times Picayune. Here are some excerpts from that 1989 newspaper account.

"After serving seven years in the military, Edwin was discharged from the Navy in 1945. After a few short-time jobs, he went to work for Commercial Bank & Trust, later known as First National Bank. He started in the Mandeville branch, under the late A.P. Stillwell, and was transferred to the Madisonville branch as manager when the bank opened in 1946.

"He was then transferred to the Covington main branch on New Hampshire Street and was promoted to assistant cashier in 1957, assistant vice president in 1963, vice president and trust officer in 1968, and then served on the board of directors. He retired from the bank in 1981, after 36 years."