In this installment of my weekly "Talent Bank" column from 1985, I spoke with artist John Akers of Abita Springs about his great diversity of art portraying St. Tammany Parish wildlife and outdoor environments. Here is the text from that article:

Artist Jack Akers of Covington has a habit of combing the woods and swamplands of the South, taking pic­tures and then transforming those pictures into portraits of landscapes, mystic scenes that have earned him a considerable reputation. 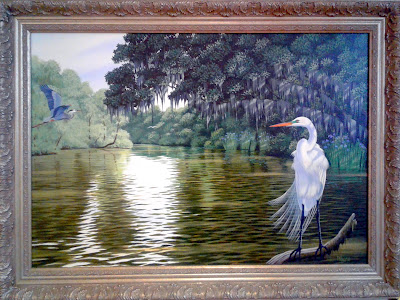 Akers has been painting now for 20 years, 14 of those as a full time pro­fessional, and his current efforts are aimed at picturing ducks and other wildlife in native habitats for various duck stamp competitions around the nation. He recently plac­ed third in the Indiana Duck Stamp competition, where there were over 400 contenders submitting artwork.

His early work concentrated on bayous and landscapes, something that is still close to his heart. He en­joys canoeing through the isolated areas, making sketches and taking pictures for frames of reference for future works of art. His wanderings take him from the Bogue Chitto River to the marshes of Lake Pontchartrain to the Stock Island refuge near Talisheek and even as far as Texas. 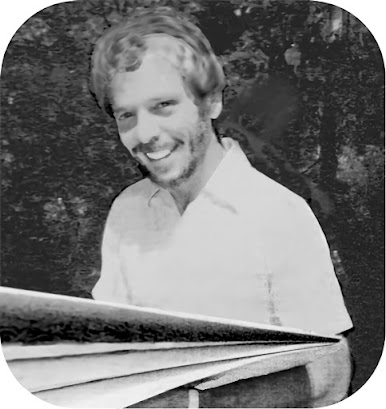 "Some of the photographs are good enough where they would make a nice painting with just a few changes," he said, "but generally I put a combination of photographs together with the wildlife." He also goes out and photographs his own egrets and raccoons and herons. "I do a lot of raccoon paintings," he commented, saying that the public really likes raccoon pictures. He is planning a series of prints featuring them and other wildlife subjects.

This and several other projects will keep Akers busy all summer as he hopes to have them ready by the fall. Anyone who thinks that free lance artists just sit around all day waiting to be inspired hasn't check­ed into Akers' schedule. He and other notable artists in St. Tam­many Parish keep their noses to the grindstone, putting out a lot of work. It helps the general public remember who they are and what they can do and keeps up demand for their work.

Akers said that his late night pain­ting sessions are frequent now that he has challenged himself into deadlines.

He likes to finish his works in pro­gress and get started on something else as soon as possible. While he uses acrylics to a great extent, he started out in traditional watercolors. "I'd like to experiment with different media," he said, "but I don't have time. There are several techniques and papers I'd like to get into, but I just don't have the time."

He added that he will reach the point eventually where he will have the time to get into the media and techniques that he's been wanting to try.
In the future, he'll be entering other duck stamp contests, including the national Ducks Unlimited title this fall and the federal duck stamp competition. He also does cop­perplate etchings every other month, and between putting out the etchings and the prints and the duck stamps and the landscapes, he's pretty busy.

Akers is well known in Covington circles for his work, his classes and his art supply store of several years ago. His is a name that brings to mind picture-perfect paintings, a style that has stirred comment among local art observers for years but has paid off for Akers, whose work is now featured by one of Cov­ington's newest art galleries and frame shops.

St. Tammany Parish has a lot to offer in scenic swamp tableaus and backwoods wildlife environments, and Akers is just one of dozens of artists and photographers who have sought to capture its beauty on film and on canvas for the rest of the world to enjoy.

Akers found what his talents were and the best way to utilize them. After that came the production of scores of paintings and prints which were very well-received by the art-buying public. When he says he didn't have time to explore any other papers or techniques, it was because his work was very much in demand, a situation any artist can appreciate. 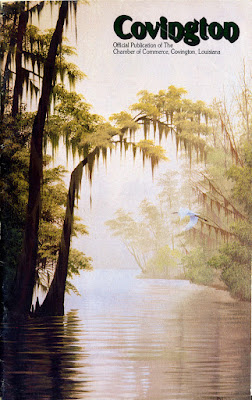 Akers painted the cover image for the 1981 Chamber Magazine

He was especially successful in winning competitions for the artwork used on duck stamps and wildlife preservation posters. His 1990 print for the Aquarium of the Americas in New Orleans was very popular. He signed and numbered 5000 of them, and the art was also used on a stamp. 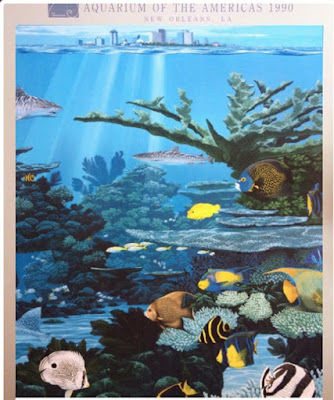 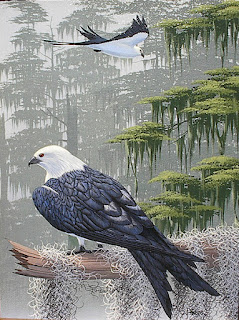 Prints of the painting above are being sold to help raise funds for the Northlake Nature Center. CLICK HERE for more information. 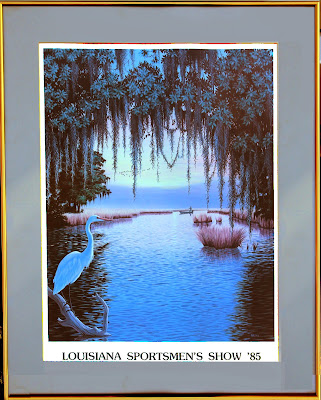 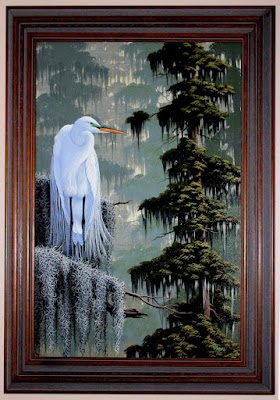 A description of the artist and his art reprinted from Worthpoint.com:

"The Art Of John Akers -  John Akers, the renowned Abita Springs artist, is known for his unique style and palette. His prints and paintings are instantly recognizable regardless of where they are displayed. He once said that he got a great deal of satisfaction knowing that his style was so distinctive, achieved through many years of hard work and not influenced by any institution or individual, past or present.

For many years he concentrated on the study and painting of wildlife, waterfowl, fish, coral reefs and florals. He performed the tremendous research and also developed the skill and patience required to paint these subjects accurately and realistically. His duck paintings are among the very best, as evidenced by his being named Artist of the Year in 1985 and 1989 by Ducks Unlimited. He was selected, for several years, to design and paint the official annual Louisiana Sportsmens Show poster.

In addition to wildlife scenes, John produced his bayou country works. His very intricate paintings of oyster boats, shrimp trawlers, and peaceful bayous and water ways are in ever-increasing demand. Says John: 'I felt the need to record these scenes through my paintings before their innocent beauty is lost to encroaching civilization. Because of my feelings for these subjects, I am able to paint with both emotion and realism.'

Akers' works are on display in many fine galleries in Louisiana, Texas, Florida, Mississippi, Alabama and Georgia. His works also hang in thousands of homes and offices throughout the Unites States. Johns paintings are in collections in England, Australia, South America, Mexico, Africa, Europe, Russia, Japan and in many other countries. He is listed in American Artists of Renown, the book of who's who in American art." 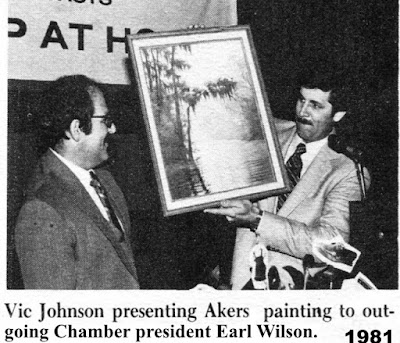 He died on Tuesday, November 14, 2006, at Lakeview Regional Medical Center in Mandeville at the age of 62. He was a native of St. Louis, MO. and a longtime resident of Abita Springs, LA.

According to Artworks of Louisiana website, Akers was known for his unique style and palette. His prints and paintings are instantly recognizable regardless of where they are displayed. Jack, as he was known by his friends, produced wildlife scenes, bayou country works, oyster boats, shrimp trawlers, and peaceful waterways in ever increasing demand. He was also one of the few artists that still created copper plate etchings. Jack always stated that "Because  of my feelings for these subjects I am able to paint with emotion and realism."

His painting of a jaguar at a Mayan temple in Belize was selected for one of the country's conservation stamps. It was entitled "Spirit Guardian." 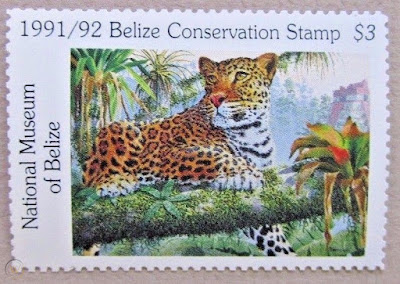 The print was issued in 1991. Fifteen hundreds prints were available in the signed and numbered edition, with 150 Artist Proofs. The original painting was 13 inches by 18 inches and prints were made by Harvey Press in New Orleans. 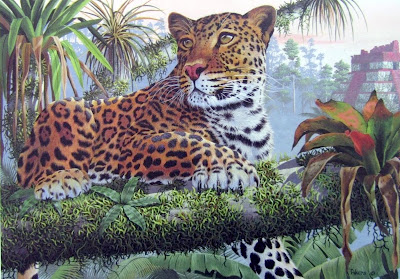 In their promotion of the print and stamp, the National Museum of Belize wrote that Akers had been a professional artist for 29 years (starting in 1963), that he was self-taught, and that he did a tremendous amount of research for each painting to make it realistic and unique.

His list of honors included being selected by the National Wildlife Show in Kansas City, MO, to display and market his work. Additionally, he was invited to show and sell his work at the Wild Wings, Wildlife in Miniature Show in Lake City, MN.

Some of Akers' wildlife paintings are shown below 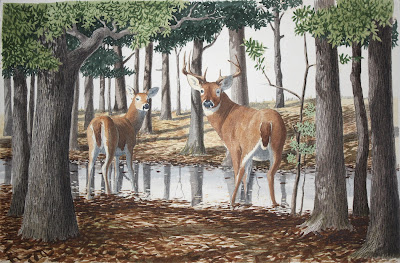 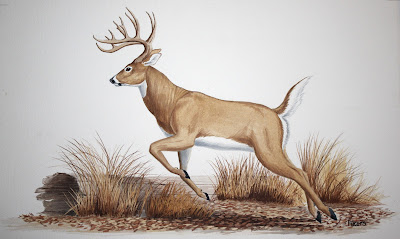 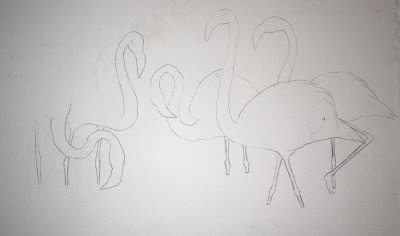 A beginning sketch of a flamboyance of flamingos 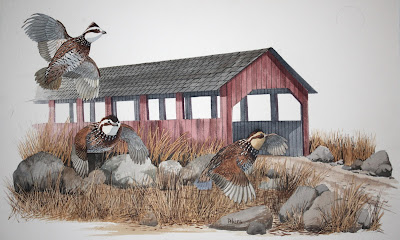 For a Google search of the paintings of "John Akers - artist" CLICK HERE.