Many older Covington residents may remember the "fire escape" from the third floor of the old Covington High School building on Jefferson Avenue. It consisted of an enclosed tunnel that kids would slide down to get away from the flames. Of course, it was a real temptation for some of the youngsters to slide down for fun also, when they could get away with it. 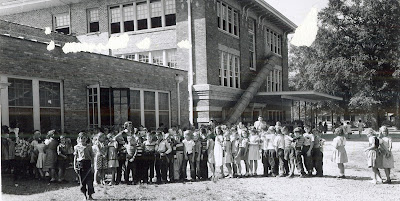 Click on the image above to see a larger version. 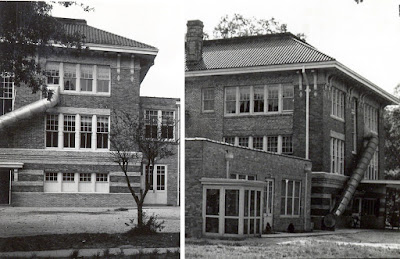 Bruce Cleland said it was fun to play in those, but at some point doors were installed on the bottom to keep kids from climbing in them. Virginia Strange-Smith slid down it many times and never got caught. "That was a big thrill for a bashful little country girl back in the late 40's," she said.

While many students got to slide down the tunnels during fire drills, there were a few who went to the school on the weekend to climb up from the bottom and slide back down. A few students were too scared to try sliding down them. It was probably pretty dark inside at the top.

Facebook commenters identified the young lady teacher in the picture as Miss Daniels Edmundson, the 3rd grade teacher. The man standing in the very back of the group may be Henry Mayfield, a key School System administrator during that time period.

Deborah Folse LaCroix Williams said she would walk there on the weekend just to play on them. "We would climb up the inside and slide back down. One Saturday we went to slide and the school board had installed a bar across the bottom so we couldn't get in from the bottom. It sure ruined our fun." 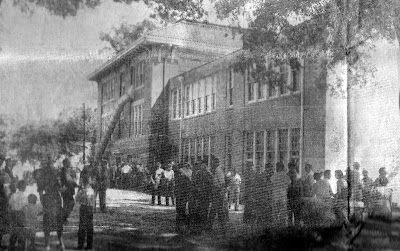 The fire escape slides became nationally famous during the Earl K. Long sanity hearing in 1959, when the Covington school gym was used as a courtroom. National news media coverage converged upon the school for several days during the proceedings, with several pictures in the newspaper showing the crowds waiting outside for news of the events unfolding at the hearing.