The small wooden building that once housed the Folsom public library is being refurbished, saved from destruction through the efforts of a community fund-raising project, a community that remembers going there after school and during the summer to check out the books, both figuratively and literally. 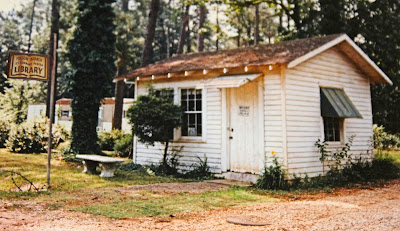 The original Folsom Library building
Click on the images to make them larger.
Known as "Aunt Decie's" Library, the structure is located on the corner of Broadway Street and Leon Alley and at one time played a central role in the education of and leisure time activity of Folsom’s youngsters and oldsters alike.

When the library was moved to a bigger more modern facility in 1987, the old one room building began to deteriorate, its side walls weather-beaten and its roof a garden of grass and other vegetation. 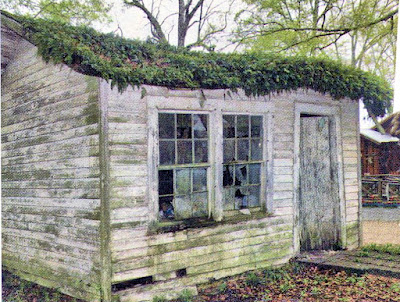 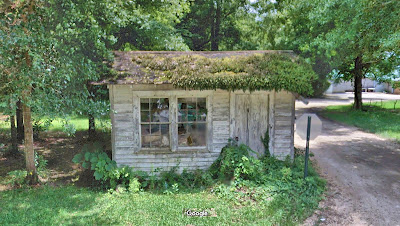 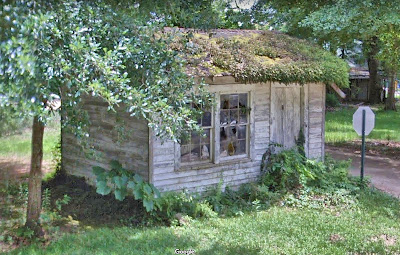 Frank Richerand, owner of the Giddy Up coffee shop (and gathering place), owns the structure now and is looking forward to restoring it to its former glory as a place for books and children. Currently located between the Giddy Up and the Paddock outdoor music venue, the building already looks a lot better than it did in 2014. 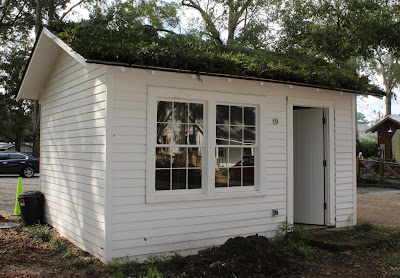 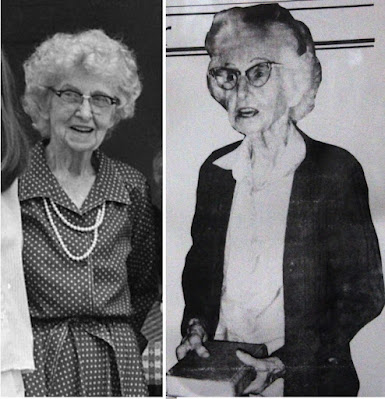 "Aunt Decie" Pittman
The Founder of the Folsom Library

Built in the 1940’s the small building was behind the home of James and Ella “Aunt Decie” Pittman. When they decided to use the structure as a community library, she became the town librarian and launched a new career. Many Folsom residents remember walking from the school to this library and back to get their reading adventures. 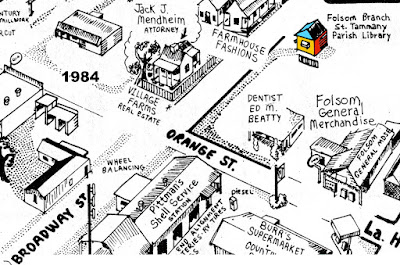 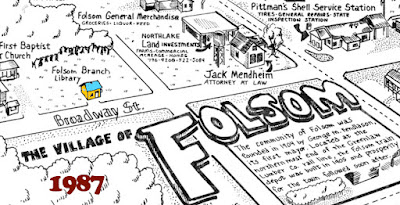 It also was a landmark on the 1987 map of Folsom shown above. Later in that year, however, the library moved to its new larger quarters at the corner of Railroad Avenue and Canton Street.

According to an article in the recent edition of the Louisiana Country Magazine (published by WSTEC), the library building was constructed in 1943 as a "work shed" for the Pittman's water well business. In the mid-1940's the shed began to serve as the town's library, and it continued in that capacity for four decades. 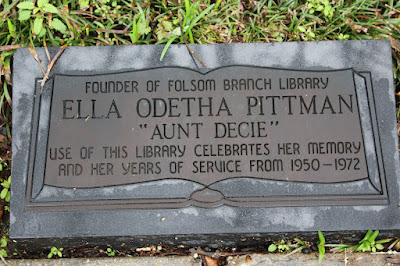 "Our children benefited greatly by having access to this library," says Frank Richerand. "The building was small, and the children entered two at a time while other students waited in a line outside, anticipating their chance to enter the world of reading.

"Our children continued visiting this library until the 1980's, and they have fond memories of that unique experience," Richerand concluded.

The Louisiana Country article goes on to say that the restoration of Aunt Decie's library is the "first step in the initiative to preserve local culture and landmarks."

When the library was moved into a newer larger facility in 1987, the small wooden building was no longer needed. To save it from neglect, when Richerand acquired possession of the building,  he and a group of local residents decided to get together in an effort to thoroughly renovate it to save the structure. 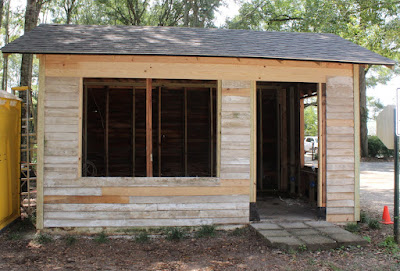 Photos from a few months ago 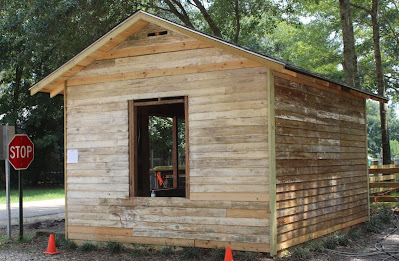 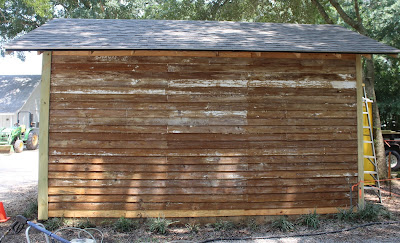 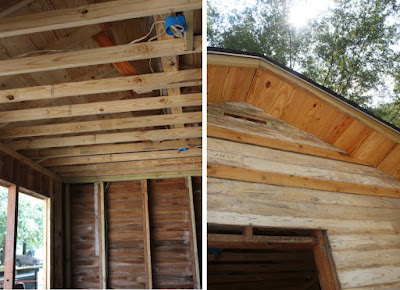 Considerable progress has already been made on the $50,000 project, which aims to turn the historic location into a local museum and/or book exchange similar to those which have become popular in many other small towns across the nation. 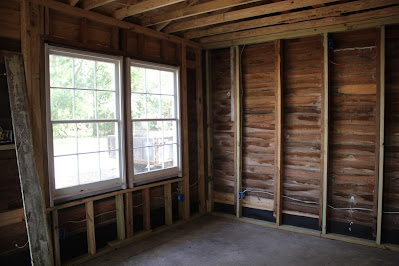 The interior still needs some work
A used book sale was recently held at the Paddock to help raise funds for the project. 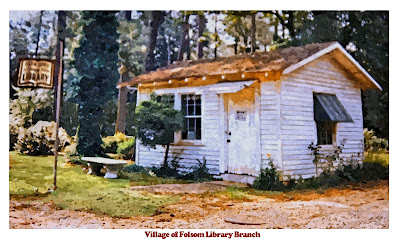 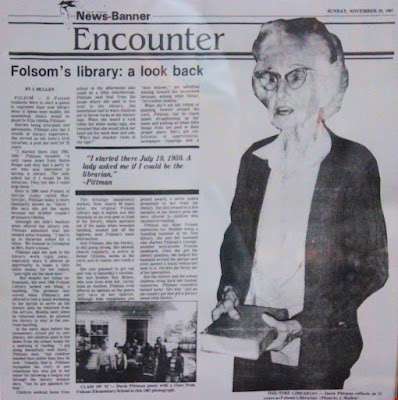 On Sunday, November 29, 1987, the St. Tammany News Banner ran a full-page feature story on Mrs. Pittman and the history of the Folsom Library. Here is the text of that article:

Folsom's Library: A Look Back
by J. Mullen
FOLSOM- If Folsom residents were to elect a queen to represent their new library when it opens next month, the unanimous choice would no doubt be Ella Odetha Pittman.
Besides being articulate and personable, Pittman also has a wealth of library experience. She served as the town's first librarian, a post she held for 23 years.
"I started there July 19, 1950," Pittman recalled. "A lady came down from Baton Rouge and they had a party to see who was interested in having a library. The lady asked me if I would be the librarian. They felt like I could help them."
Born in 1900 near Folsom at Onville (today called Martinville), Pittman today is more better known as "Decie." She says she got the name because her brother couldn't pronounce Odetha.
Although she didn't hesitate when offered the library job, Pittman admitted that she needed some training. "I had to go to librarian school for a while. We trained in Covington at Mrs. Burns' house." Pittman said she took to the library work right away, especially since it offered an opportunity to make a little extra money for her family "just right out the back door." 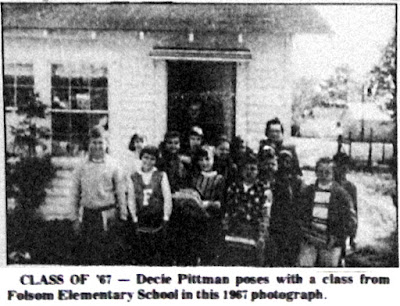 But despite her initial enthusiasm, the new 1950 Folsom Library lacked one thing, a building. The problem was solved when Pittman's son offered to rent a small workshop to the parish to serve as the library until he returned from the service. Months later when he returned home, he allowed the library to stay in the one-room building.
In the early days before the elementary school got its own library, the children used to file down from the school house for a morning of reading. "I got along beautifully with them," Pittman said, "but children minded then better than they do now."
Usually that is. Pittman recounted the story of one rebellious boy who got in hot water for throwing a tung nut through the library window once, "but he got spanked for that."
Children walking home from school in the afternoons also could be a little mischievous. Pittman said that from the house where she used to live next to the library, she sometimes had to warn children not to throw rocks at the library sign. When she heard a rock rattle the white metal sign, she recalled that she would stick her head out the back door and ask, "Who's that chuckin' rocks at my sign?" 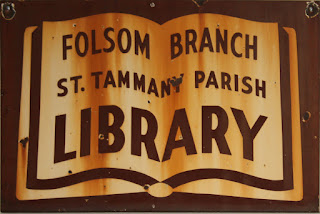 The library picture from the 1987 newspaper article
And Pittman, like the library, is still going strong. She attends church regularly (at the age of 87), is active in Senior Citizens, works in the yard, and of course, she reads a lot.
She also planned to get out and vote in Saturday's election. She and brother Roy McKee, who now lives with her, rarely miss an election. Pittman even offered an opinion on the police jury race in her district. Although both candidates are "nice fellows", she admitted leaning towards the incumbent because, among other things, "he's better looking."
When she's not out voting or planting flowers around the yard, Pittman can be found inside straightening up her home and putting all those little things from the past in their proper place. She's got certificates of appreciation, newspaper clippings, and a prized award, a silver goblet presented to her from the library. She still treasures a few samples of the library pens she once offered to children who excelled in reading.
Pittman has other Folsom memories too. Besides being a founding member of the first library, she and her husband started Pittman's Garage, another well-known landmark. Until she got the library position, she helped her husband around the garage and even opened a small restaurant next to it, chicken pie being one of her specialties.
But the library and the school children bring back her fondest memories. Pittman considers herself lucky: she was "just an ole country gal that got a job in a sweet little library."
End of News Banner article from 1987 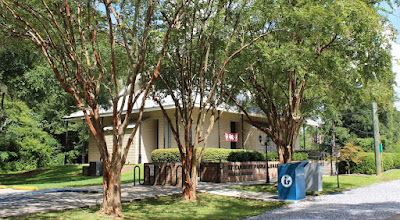 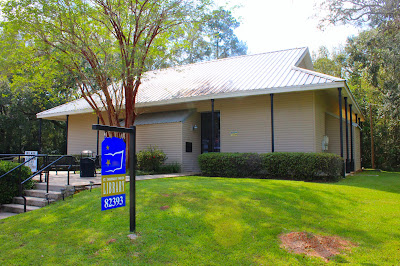 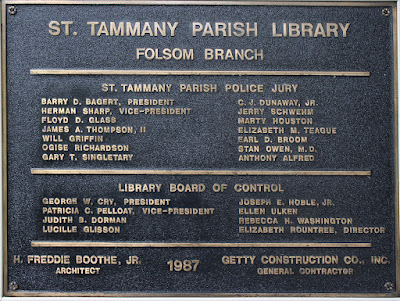