Many years ago, I sat down with Lake Pontchartrain fisherman Cliff Glockner at his place south of Lacombe, and we talked for two hours about the lake, the health of the state fisheries and the processes that affect those fisheries. 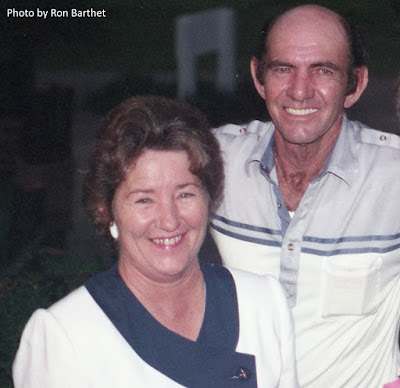 Over time, he became quite a regional voice in protecting the lake and southern Louisiana marshes, bringing real-life experience to environmental issues and debates.

To hear his comments how the lake responded to a variety of impacts, CLICK ABOVE VIDEO LINK

To hear his comments on the looming threat of global warming, click on the above video link. 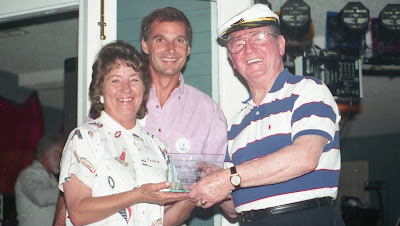 Connie Glockner receiving a Save Our Lake Award from Carlton Dufrechou and Mayor Paul Spitzfaden. 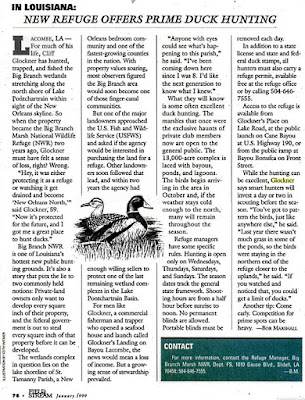 From Field and Stream, January 1999 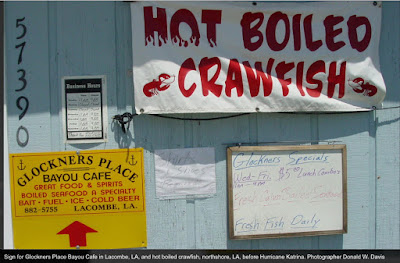 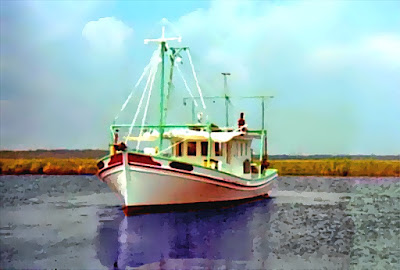 Cliff Glockner's boat Wind Song.
The boat picture was posted to Facebook by Mark Frosch Sr. He remembers "beating the bushes" to find out who the Master Boat Builders around Lacombe were. "I was in my teens when my Grandfather and I went to the Glockner Fish Camp on Bayou Lacombe to look at the Wind Song. The first thing that I noticed was the smell of the Cypress Wood, inside the wheelhouse, the engine room, and the shrimp hole.

"All of the Cypress was found by Cliff Jr. and trappers who worked for Mr. Cliff (who for decades was the premier fur buyer and overseas shippers of La. products.)

"I worked for Mr. Cliff in the early 70s packing fur in bulk to be shipped to Europe. I was also a helper of Mrs. Millie Fisher, a true Indian with a lot of stories. I learned a lot about Mandeville/Lacombe by listening to the Ole' Folks talk about the times," he said.
Connie Glockner
Connie Glockner passed away on Saturday, January 2, 2021 in Mandeville, LA. She was born on May 24, 1945, in Madisonville, LA to the late Henry Pierre Achee and Ella Lucille Bruhl Achee.

From the E. J. Fielding Funeral Home obituary: Connie was respected, cherished and loved by all who met her. She believed in actions over words, and that principle guided her throughout her life. She was never afraid to take on a good fight, and she was passionate about preserving our way of life here in S.E. Louisiana for many generations to come.

Connie was nationally known for her advocacy for environmental causes. She was a leader in the grass roots effort to “Save Our Lake” and a founding member of the Lake Pontchartrain Basin Foundation. Recognizing the importance of our wetlands, she campaigned for the creation of the Big Branch National Wildlife Refuge, which was established in 1994 and encompasses 18,000 acres along the north shore of Lake Pontchartrain. She, along with her husband Cliff, received many awards for their tireless efforts to preserve Lake Pontchartrain and surrounding wetlands, including the prestigious National Wetlands Award for Volunteer Leadership in Washington D.C.

Connie loved to serve her community and did so with honor and integrity when she was twice elected Police Juror for District 7.

Connie, Cliff and her son Ron also owned Glockner’s Place restaurant in Lacombe. It was well known for their delicious seafood and great scenery, but more importantly, it was known as a place where you were treated like family. It was lost in Hurricane Katrina, but it is still fondly remembered today by all who visited.