When I first moved to Covington in 1968, the entire area would tune to the local AM radio station WARB for the morning "School Calls" and "Swap Shop." The school time reminders helped parents and children know when it was time to leave for school, and the Swap Shop was an early Craigslist type of sale/barter exchange, with happy birthdays thrown in from time to time.

The rest of the day featured country music, local news and ads. The station was well-liked and appreciated, especially for its on-site remote broadcasts of special events and parades. 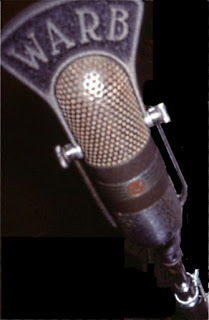 I recall that Station Manager Rick Webb emceed the Parish Fair Baby Contests and Beauty Pageants each year, and for the last several years he was a mainstay at the Covington Farmers Market selling his jams and jellies. 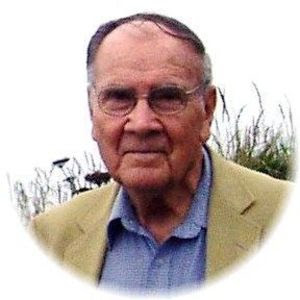 The article I wrote about WARB and its on-air personalities during the 1970's is located below. Just click on the image to enlarge it to a readable size. 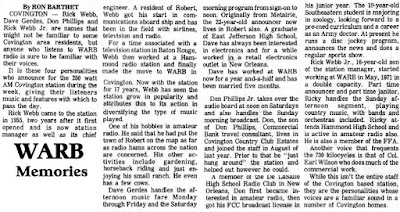 Here is the text from the above article:
COVINGTON — Rick Webb, Dave Gerdes, Don Phillips and Rick Webb Jr. are names that might not be familiar to some Covington area residents, but anyone who listens to WARB radio is sure to be familiar with their voices.

It is these four personalities who announce for the 250 watt AM Covington station during the week, giving their listeners music and features with which to pass the day. Rick Webb came to the station in 1955, two years after it first opened and is now station manager as well as its chief  engineer. A resident of Robert, Webb got his start in communications aboard ship and has been in the field with airlines, television and radio.

For a time associated with a television station in Baton Rouge, Webb then worked at a Hammond radio station and finally made the move to WARB in Covington. Now with the station for 17 years, Webb has seen the station grow in popularity and attributes this to its action in diversifying the type of music played.

One of his hobbies is amateur radio. He said that he had put the town of Robert on the map as far as radio hams across the nation are concerned. His other activities include gardening, horseback riding and just enjoying his small ranch. He even has a few cows.

Dave Gerdes handles the afternoon music fare Monday through Friday and the Saturday morning program from sign-on to noon. Originally from Metairie, the 22-year-old announcer now lives in Robert also, A graduate of East Jefferson High School, Dave has always been interested in electronics and for a while worked in a retail electronics outlet in New Orleans. Dave has worked at WARB now for a year and-a-half and has been married five months.

Don Phillips Jr. takes over the audio board at noon on Saturdays and also handles the Sunday morning broadcast. Don, the son of Don Phillips, Commercial Rank travel consultant, lives in Covington Country Club Estates and joined the staff in August of last year. Prior to that he "just hung around" the station and helped out however he could. A member of the De LaSalle High School Radio Club in New Orleans, Don first became interested in amateur radio, then got his FCC broadcast license in his junior year.

The 19-year-old Southeastern student is majoring in zoology, looking forward to a career as an Army doctor. At present he runs a disc jockey program, announces the news and does a regular sports show.

Rick Webb Jr., 16-year-old son of the station manager, started working at WARB in May, 1971, in a double capacity. Part time announcer and part time janitor, Ricky handles the Sunday afternoon segment, playing country music, with bands and orchestras included. Ricky attends Hammond High School and is active in amateur radio also. He is also a member of the FFA.

Another voice that frequents the 730 kilocycles is that of Col. Earl Wilson who does much of the commercial work.

While this isn't the entire staff of the Covington based station, they are the personalities whose voices are a familiar sound in a number of Covington homes. 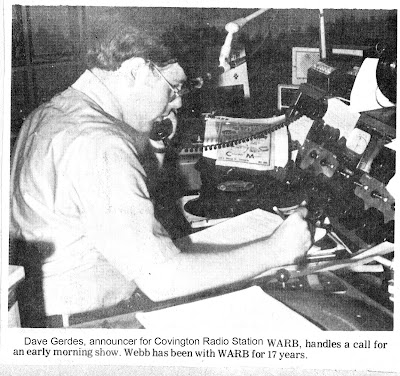 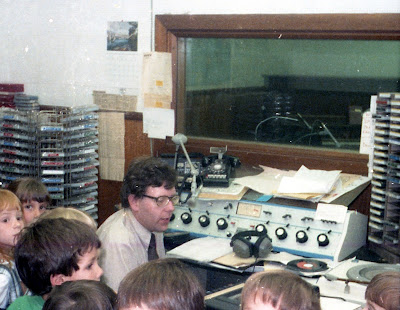 Tours of the station would be given to groups of children. The window above the control panel gave a view into the soundproof studio where interviews would be conducted, along with Sunday morning church programming.
Richard Warner recalled that WARB was managed by Rick Webb, with Betty Fitzmorris Ferrer (Hank Ferrer's's wife) as the secretary for many years and later, Dorothy Blossman, David Blossman's wife was there. Cy Plummer and his brother, Robert Warner, were disc jockeys there also. This was back in the mid 50's. Bob Minton was their advertising salesman in the early 1960's. Curtis Sharp, Paul Varnado, Don Dubuc, Gene Perry  and Ted Talley also worked at the station for a time. Iain Chaplin was the Sunday anchor with several preachers on the air including Orvile Rainey. 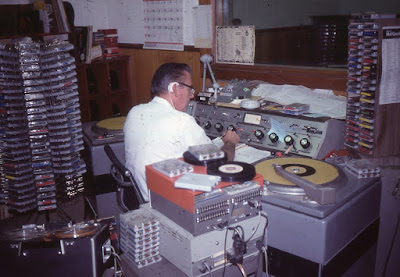 The turntables and cart racks, with Dick Bradley at the control board 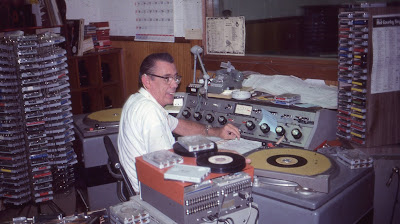 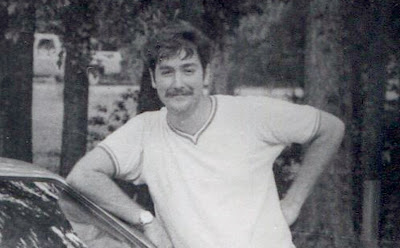 Don K. Phillips Jr.
Over on Facebook George Beyl stated that the Badeaux's Drive Inn Sports Show was his. "I worked there in the early '70's while a student at SLU. I did play by play of Covington High football on a tape delay to be played back on Saturday morning. Also did the daily 15 min. sports show and was the weekend D.J. playing top 40 hits on Saturday afternoons and on Sunday."

St. Tammany Parish celebrated the American Bicentennial in 1976 with parades, ceremonies, and fireworks.

To listen to a WARB radio broadcast of the festivities, CLICK ON THIS LINK for a YouTube audio file. The event was accompanied by several re-enactments with actors in costumes. Among the voices heard on the recording above are Rick Webb, Bill Stubbs, Pat Clanton, Rev. Baxter Pond, and Dorothy Kehoe.

For a year or two I had a daily recorded interview show on WARB. Each week, I enjoyed visiting with artists, business people, politicians, and many others to hear their personal stories, their hopes and their community concerns. Once while I was broadcasting the parish fair parade through downtown Covington, I forgot how loud high school bands were. The radio listeners didn't hear much other than the rousing music on its way to the fairgrounds.

One of the people I interviewed was Al Albert, a Covington printer who also had a big band orchestra. CLICK HERE to hear that interview. 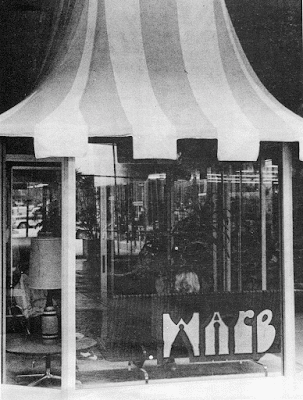 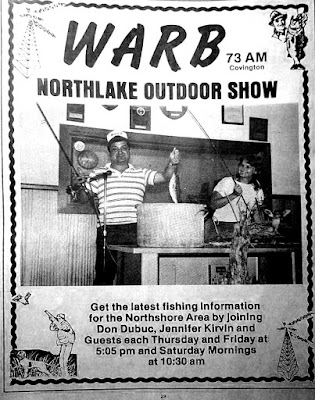 The main studio was located on U.S. 190 west of Covington High School, across from the entrance to Willow Drive into River Forest Subdivision. CLICK THIS LINK to go to the Google Maps location. 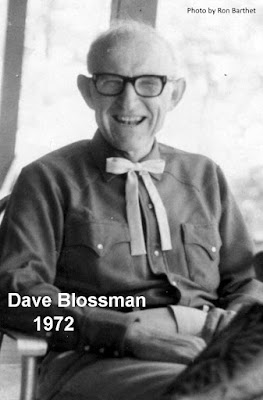 Dave Blossman was one of the owners of WARB.

Click on the article above to see a larger, more readable version. 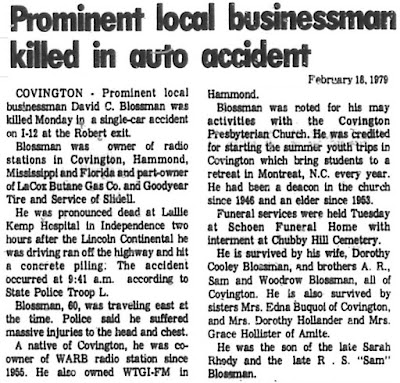 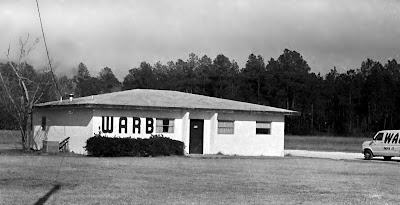 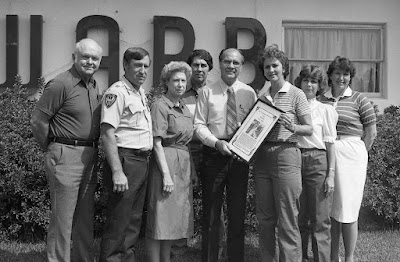 Standing in front of the WARB studios, Frances Barker with the St. Tammany Parish Fair Association presents station manager Rick Webb with a framed fair poster, after announcing that the 1984 fair would be dedicated to him for his many years of community service. From left to right on the front row are Johnny Bankston (County Agent), Lawrence "Cotton" Jourdan (Covington police officer), Donis Jenkins, Rick Webb, Frances Barker and Sandra McManus. 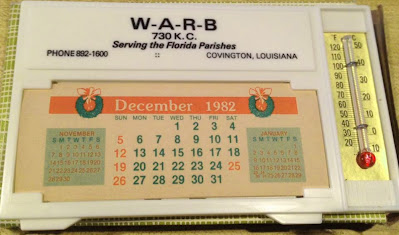 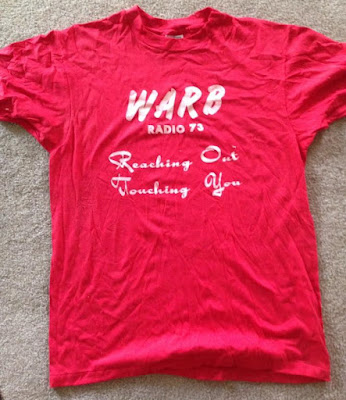