This photo shows the Pearl River train station in the early years of the 20th century. 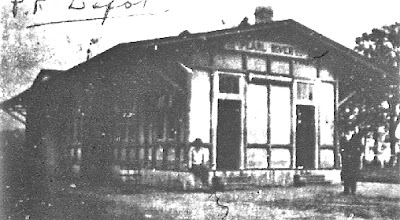 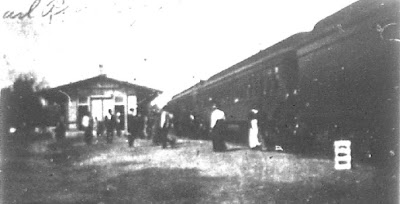 Rudolph Penton, a man with a vivid memory at ripe age of 75, recalls many days of yesteryears.

Later on a Shinglemill was established. "My uncle worked up there. We used to go and see him. All the people who worked there had a two room house, even if the families had six or eight children. That was the company quarters, right along the railroad track."

And back in those days, they had no bridges across the lake nor across the swamp. Everybody had to ride the train. There wasn't any buses. On a Sunday excursion from New Orleans, people would load that train down to spend a vacation up this way."

"All the trains had to stop in Pearl River to get water, for the steam engine. They would pump the water from Pump Slough. That's how Pump Slough got its name.

The trains would stop in Slidell to get water and in Picayune to get coal. But when East Louisiana was running, they had no water in Slidell. 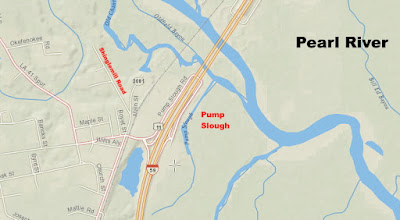 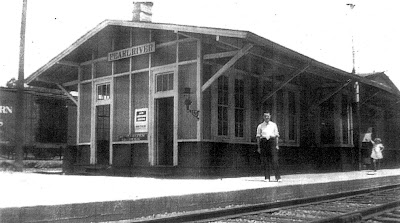 The Pearl River Train Depot in 1933
Train Station Building
In the mid 1960's Pearl River had a small train station. Here are two pictures from the St.Tammany Rails Page of the AlphaRails.net website. Click on the images to make them larger.

"Evidently passenger trains or some sort once stopped in Pearl River, judging from the small covered waiting area." Photo taken by Chuck Graham in August, 1965 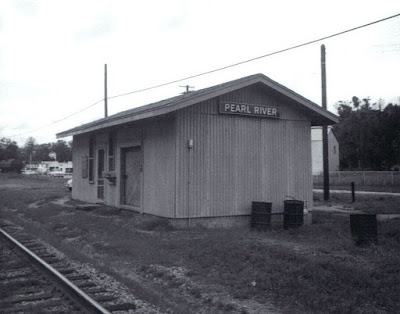 "The other end of the station has what looks to have been a freight room. Now it's likely used for maintenance of way and signal storage." Photo taken by Larry Tuttle in August of 1967.

You may also want to visit Page 1 of the Tammany Rails section of the AlphaRail.net website. CLICK HERE to go to that page maintained by Larry Tuttle. 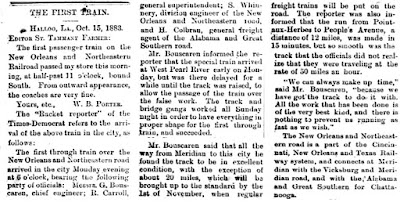 The community that is today Pearl River was originally known as Halloo, a moniker it reputedly garnered from loggers yelling to one another as they labored along the nearby Pearl River. The town was founded in 1859. Early Halloo was a small railroad town, located at the junction of the Northeastern and Poitevent and Favre’s East Louisiana Railroads.

In 1886 a train station was constructed at the site, and two years later Samuel Russ Poitevent (June 4, 1852 – June 3, 1904), established the first store in the village. The community’s name was first changed from Halloo to Pearl, later to Pearlville, and eventually Pearl River, in 1888, after the train station built in the town.

On July 13, 1898, the 200 citizens of Pearl River voted to petition the state of Louisiana for incorporation as the “Village of Pearl River”, a request which was granted nearly a decade later, on May 24, 1906, by governor Newton Crain Blanchard, with G.W. Fuller as the first mayor. The village slowly modernized over the course of the next half century, acquiring the land for a courthouse in 1935 and a town hall ten years later.

Pearl River Junior High was opened in 1963, but the building was made into a police training academy in 2005. In 1964, the village insignia was replaced, as the newly minted “town” laid claim to 1,500 residents, a designation that lives on today, in the town of about 2,500. In 1968 Pearl River High School was established on Taylor Drive with Mr. Rowley as principal.