An article written by Naomi Rausch appeared in the February 4, 1976, issue of the St. Tammany News-Banner as part of the local Business and Professional Womens Club's American Bicentennial Year series on the Women of St. Tammany Parish history.

It told the story of " a tiny French woman who spoke only French, Angele de le Vallette Planche. Though she did not play a great role in our political structure or our economic life, she depicts the greatness of character that withstood the hardships of a tragic war and who during the reconstruction period held her head high with dignity and at the same time possessed the ability to perceive and enjoy a great sense of humor."

Born on a sugar plantation in Plaquemines Parish in 1820, she was the daughter of Louie Valentine de la Vallette and Rosalie Duet. She was christened in the St. Louis Cathedral that same year.

Ms. Rausch noted that in her teens Angele  was a "much admired belle of New Orleans. Her first marriage was to a Veillon by whom she had one child, a girl, Pauline de Lapoyade. Her husband Veillon died leaving her a young widow."

"Her second marriage, in 1850, was to Louie August Marie Planche. From this marriage three children were born, Victor Joseph Marie Planche, Victoria Planche and Louie August Planche, and from these three children are the Planche descendants that are living in the area and who have evolved into the largest land owners, strong political leaders, and contributors to the growth of St. Tammany Parish.

"Her grandfather, Louie Valentine de la Vallette, came to America with Lafayette," Ms. Rausch's article went to say. He married Constance Tessier of New Orleans, and they had ten children, one of which was Angele's father, Louie Valentine. "Perhaps the venturesome spirit of her grandfather lived in the genes of Angele. It was he who lived well, lost well, and lived well again, for he was a great gambler and lost three plantations, Red River, Belle Chase and Cedar Grove through his reckless and daring gaming."

"For several years prior to the War Between the States, Angele de la Vallette spent the summers in her father's home, located on the present site of the Villa de la Vergne, on the Bogue Falaya River," the article stated. "Angele loved this section and after her marriage to Louie they spent their summers and holidays here."

It was during the Civil War that the Bogue Falaya River home became an escape and a haven for Angele and her three small children while her husband, Louie August Marie Planche, was on the battle field.

The article then tells of the conditions when New Orleans, in 1862, was occupied by enemy troops. In the story of the harrowing escape from the Cresent City to Covington, Ms. Rausch tells of the burning of the Mississippi River wharves, the family's escape by skiff, past the federal blockade in Lake Pontchartrain and their rescue by a lake schooner that took them to the mouth of the Tchefuncte River.

The adventure continued as Angele and her three children made their way from the swampland near Madisonville, past the occupied town, and continued upriver to the Bogue Falaya home. She had to keep her children quiet to safely get past the watchful troops.

They were taken by skiff and buggy, arranged for ahead of time, from Madisonville towards Covington, and they finally reached their Bogue Falaya River home.

Shortly afterwards, Angele sent her twelve year old son Victor out hunting with the only gun for squirrels and rabbits, and on one occasion Victor saw a gun boat on the river and ran home, losing the gun along the way.  Angele sent him back into the woods to look for the gun. But she remained vigilant about the approach of the Union gunboat and its crew.

"She then had the one and only horse brought into the cellar, tied his mouth with rope and wrapped the horse's feet with burlap sacks so that all would be quiet. Fortunately the Yankees did not reach their River home.

"It was this courageous woman who lived and managed food and clothing for her children while her husband Louie was away at war. It was this tiny frame who once lived in the luxury of prewar days who planted seed for food, it was she who instilled courage and humour into her family," Ms. Rausch wrote.

"There was an incident during Reconstruction when Angele was going into Covington by horse and buggy for supplies when two masked men stopped her. (It is not known if they were fugitives.) Angele took the horse whip and furiously flayed them. She made them remove the masks.

The article went on to tell of her later years. "Then there are the humorous stories of Angele. She was a lover of animals. During the summer when flies were buzzing around the screen doors and often entered the house the old method of flypaper was being practiced. When Angele saw a fly land, on the sticky paper she would delicately pick the fly off and loosen it to fly to freedom.

"One night her husband, Louie, in jest, knocked at the front door and would not answer when she  asked who was there. The joke almost ended in tragedy; for when Louie did not answer Angele blew a hole through the door with her shot gun." 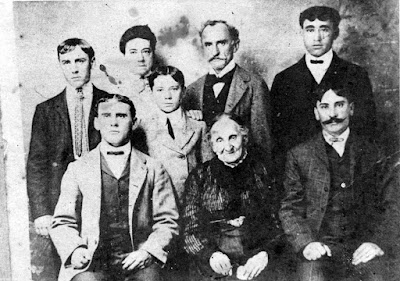