In 1973, some 44 years ago, the dairy farmers of St. Tammany Parish held a summer bar-be-que. Here's a picture and some information with quite a few names of the longtime dairy farmers. 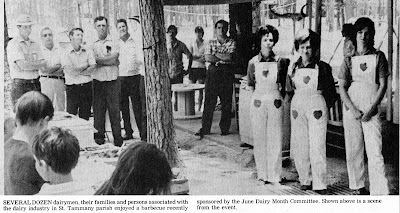 Over 50 persons, including dairymen, family members and friends attended the cook-out with swimming in a nearby river, horseshoe throwing, darts and ping pong among the games played.

Certificates of appreciation were handed out to the dairymen testifying to their years with the industry. The June Dairy Month committee had been coordinating a month long commemoration of the dairy industry and the cook-out  ended the planned activities.

Ladies who are members of the June Dairy Month Committee are Mrs. Paul Fitzmorris Jr., Mrs. Jerry Bruhl, Mrs. Donice Thompson and Mrs. Delos Thompson.
Brief comments were made by the committee concerning the hard times that had befallen dairymen and the coming crisis in increasing costs. The dairymen were thanked for their many years of faithful service to the St. Tammany Parish diary industry, service totaling over 340 years.

The barbecue was a cooperative effort among parish merchants and members of the dairy community.

Among those present were Police Juror Red Thompson and C. A. Stewart, president of the Louisiana  Milk Producers Association.

The fact that only 21 dairymen were left in St. Tammany Parish was mentioned.
June had been named Dairy Month to help keep milk and milk products sales up after the closing of schools. Better production during the month had usually increased supplies when the demand was down, thereby bringing down prices.

The end of school and steadier production practices have eased the situation somewhat, but June is still celebrated as the month to honor dairies. Both statewide and national campaigns are initiated to salute the dairy industry.   1973


Here's another dairy industry article from 1955 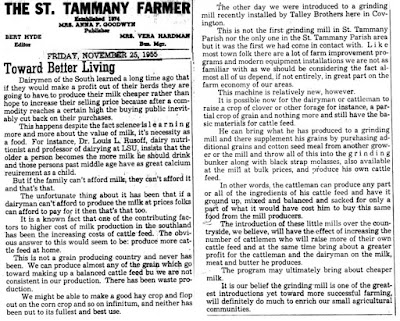 But how did it all get started? A model dairy was proposed and the dairy industry was promoted in Mandeville in 1911.