The Challenges of Child Care

Sister Gertrude was director of St. Gertrude's Convent when this article was written in 1986. With her background and experience, she was well-suited to run the convent and its child care program. Click on the article below for details. 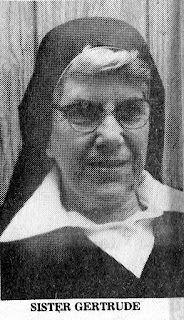 
Upon meeting Sister Gertrude, the words kind and patient immediately come to mind, both qualities essen­tial for her career with children, a period spanning over half a century.
St. Gertrude's Convent was established in 1903 by an order of Sisters who had originally im­migrated to Oklahoma from France. 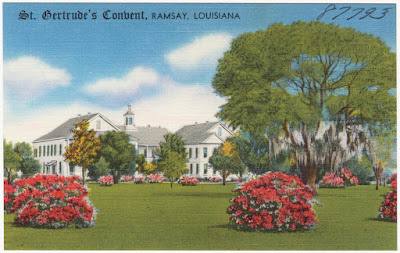 Finding the cold climate objec­tionable, they moved to Covington at the request of Abbott Paul at St. Joseph's Abbey. For the Sisters Mother Gertrude bought two boar­ding houses which were moved to the present site, originally a 300-acre saw mill town on the river. The pro­perty's small school house was pur­chased, and in 1922 a grammar and boarding school opened, thereby in­augurating the Sisters' tradition of providing care and education for local children.

After a history of over forty years, the school was closed and replaced by a day care and kindergarten with Sister Gertrude as its Director.

Though gentle and soft spoken, she is equally as outspoken on issues pertaining to her children and the vocation she has selected. Children, she maintains, have changed since the start of her career, a reality at­tributable, she believes, to several factors. Each year they seem much more active, she feels, speculating that unbalanced nutrition and fast foods with sugar as a dominant culprit are responsible in addition to the influence of medications taken by their mothers during their pregnancies.

Inflation and the increasing costs of living also affect children, she continues, for rising prices often de­mand a two-income family, and these busy parents have con­siderably less time to spend with their children.

Sister Gertrude along with Sister Aloisia and their staff of fourteen are the source of an abundance of af­fection and attention for children who attend the day care and kindergarten on the grounds of the convent. Hugs and kisses are amply dispensed to the 120 children, a number Sister Gertrude has seen grow from the four students enrolled when the progress was founded nine­teen years ago. The children come not only from Covington but also from Folsom, Abita Springs, Lacombe, Mandeville and Madisonville.

A typical fourteen-hour daily schedule at the non-denominational school leaves Sister Gertrude with precious little time for anything other than her meditation and prayers. Totally dedicated to the children and admittedly spoiling them, she proudly adds that the graduates of her kindergarten are * more than adequately prepared to enter first grade and are usually placed in advanced groups within their new classes. She is pleased also that the school is frequently recom­mended to newcomers to the area.

Sister Gertrude favors a modified habit which consists of a black vest, jacket, veil and street-length skirt with a white blouse. She did at one time wear the long habit but, finding the flowing garments restrictive when dealing with the children, received the approval of her brother, a priest in New Orleans, and chose the new outfit for its prac­ticality.

The clothing of a religious, she says, commands respect; and she is quite adamant concerning the re­jection of the habit by many Sisters. "If you're going to become a religious," she says emphatically, "then dress as a religious." The allowance of street clothes was the action, she thinks, which generated the movement toward becoming more involved in life outside of the religious community, motivating some even to leave the order, a deci­sion, says Sister, which, she has been told, is repeatedly regretted.

When habits were required, she con­tinues, it was a time when those in the community worked, prayed and took meals together; and, she notes, currently that tendency is indicating a reappearance.

A native of Baton Rouge, she entered the convent in 1932. Her sister, having also been a member of the community, chose to leave for marriage but continues contributing unselfishly to improving the lives of others, for she has provided a home for, at last count, 34 foster children.

Sister Gertrude was honored last year at a Golden Jubilee celebra­tion, a most fitting tribute to a com­passionate woman who modestly sums up her first fifty years with children as "rewarding."