In 1984, shortly after the St. Tammany Parish Government bought and extensively renovated the old Southern Hotel building in downtown Covington, Frank Levy wrote an article about the project that was published in the July edition of "Northshore Magazine."

Here is that article about the auspicious beginning of the landmark hotel and its extensive restoration for use as a parish administrative complex. Also below are the pictures that accompanied the article. Click on the images from 34 years ago to make them larger. 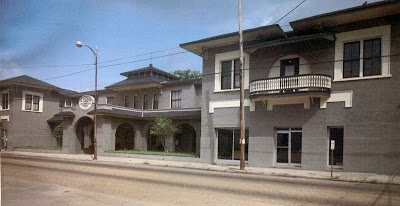 Something Old, Something New
By Frank Levy

There used to be parties here, grand parties. There was a courtyard, shaded by banana trees, where dance bands would offer pleasing melodies to fashion trend setters, both local and just-visiting. There were elegant rooms to let on the second floor, as well as some five hundred feet of lazy, mint julep, rocking chair verandah. Ah, but those days are a grandfather's age in the past.

In his time, the Southern Hotel, in Covington, used to be the absolute center for important happenings in St. Tammany. Today, that description would better fit the new parish Administrative Complex. Yet, neither grandfather nor grand­mother would be totally lost. Their elegant hotel, on its spirit of 76th birth­day, became the St. Tammany Parish Administrative Complex.

The story of the hotel's transition from center of the social whirl to center of the political and judicial whirl is a fascinating one. It is a saga of the deep South, replete with tales ranging from young lovers meeting shyly on the porch to rooms being rented by a local sanitarium for purposes of drying out alcoholics away from the public eye. It is the story of an architect, Arthur Middleton, who was able to draw upon his nostalgic roots in the old hotel to fashion its rebirth as the new hotel It is the story of a budget too small, for a task too large, but hang on, it's a story with a happy ending.

The old hotel was a wonder. It grew out of the days when Covington was a port city and a haven of leisurely escape for weary New Orleaneans. It boasted the best rooms, best service, and best times in the parish.

The hotel was built in 1907, when Covington was a thriving mercantile and transportation center. Its purpose was to better serve the businessmen and traders who came into the area as well as to provide lodging for large numbers of tourists who came to St. Tammany Parish for the healthful waters and air.

Following the opening of the hotel on June 1, 1907, The St. Tammany Farmer reported, "Covington has just reason to be proud of the new hostelry, and it goes without saying it will be the means of attracting a large number of tourists during the summer."

With tourism and trade flouishing, Covington was ready for a first-class hostelry, and the Southern was designed to fit the bill. It was designed in the then-popular Mission-style, a design fad that swept through the country from the West coast. The chef procured to run the kitchen, George Deschamps, proudly stated that he had, on two occasions prepared meals for the late United States President William McKinley.

At the opening night celebration, The Farmer noted, "All the delicacies of the season were in abundance and well served. The new linen and china reflected the good taste of those who purchased them for the hotel."

The hotel boasted forty-three stylishly furnished rooms with hot and cold baths, electric lights, "and all conveniences which delight the traveler." These included a large dining room, cooled by electric fans, and a spacious lobby which contained an artesian fountain with water which the hotel claimed, "has been analyzed by eminent chemists and has been pronounced as fine as any water in the South." The lobby also contained a tropical garden, complete with caged monkeys and alligators.

For decades, both the hotel's ballroom and its rear terrace were popular places to hold dances. According to local historian Norma Core, "The hotel flourished, even during pro­hibition, as visitors would rent rooms upstairs during dances, and porters would bring ice and Cokes to the rooms. During dance intermissions, the floors would clear while celebrants went to the rooms for an illegal drink."

Yet, for all its grand style, Covingtons's hotel still retained a touch of the country life. The post office and several popular shops were on the ground floor and, on cold winter days, cattle would wander in through the open doors.

As late as 1930, sixty thousand dollars was spent on hotel renovations, and its income was near a solid two thousand per month.  Yet, its success was not to last. Although its business carried on into the early sixties as either a hotel or motel, the Southern eventually declined and ceased room rentals altogether.

The beautiful front porch was removed to make way for a drug store and later a discount house. By the 1970 s, ground floor shops were all that were left, with the upstairs serving mainly as a home for pigeons.

Here the story shifts gears. An idea to have the building purchased by the parish and renovated into an administrative complex became increasingly popular. Even so, convoluted political and monetary difficulties prevented its realization for nearly six years.

The parish was not able to take over until officials had cobbled together a patchwork of state and federal grants, local funds, and revenues from the hotel's still-active ground floor shops. Finally, architect Arthur Middleton was commissioned to take the huge old structure in hand and transform it into a center of parish government between 1981 and 1983.

The task alone was tough enough. Middleton, however, labored under the additional restriction of all renova­tions, even down to the repainting of the building's exterior, being limited to a cost of under one million dollars.

Middleton claims a romantic link with the old hotel's past. His college days were salt and peppered with trips across the lake from New Orleans to savor the then fading establishment's comfortable rocking chair porch and the ice-cold beer.    He saw in the crumbling edifice a link with grander days and what he calls, "an opportunity to turn a white elephant into a catalyst for the revitalization of Covington." The hotel had recently been named as part of an official National Historical District and, at the behest of the parish council, Middleton took on the design of its rebirth.

The limited budget demanded great care in the plans for the renovation and here Middleton, Parish Administrative Services Manager John Blair, and Campbell Engineering Company worked together to achieve a genuine miracle. The building's original covered entry was rebuilt and its grand cypress and glass doors were duplicated. Rather than remove and replace old fixtures, Middleton chose as much as possible to find the beauty within the old.

With this in mind, vats of stripping solution were constructed on the ground floor and twenty-five solid cypress doors were refinished and returned to their original positions.

Walls were torn down to create office space, but, rather than constructing expensive new walls, Middleton chose to insert portable and highly functional modular office carrels. Ten of these are now in use by both district attorney and judicial employees with plans for more in the future.

Each section of parish government also boasts its own kitchenette facilities. These are spaced conveniently throughout the building and number five in all.

Middleton went to great lengths to retain the old hotel's inherent charm. He kept the lovely cypress stairway at the rear and exposed the building's original brickwork wherever possible. Old flaws which could not afford to be corrected were artfully reconstructed into acceptable new modes. Thus, a corridor which slopes somewhat downward now sports a false beamed ceiling which evens its lines to the viewer's eye.

A gorgeous meeting chamber was fashioned for the police jury as well as a courtroom which seats eighty. Offices were created for a multiplicity of parish employees as well as for Judge Strain, Parish Court Administrator Bob Tyler, and District Attorney Marion Farmer.

A private corridor was built to allow the judge access from his office directly to the courtroom. Two law libraries were also constructed along with a comfortable waiting room adjacent to the judge's chambers.

Middleton's careful planning is evident everywhere as is the attention to detail followed through by both Blair and Campbell Engineering. What the parish has achieved at a budget of less than a million dollars is a lesson for future administrative planners.

Yet, perhaps more important than the monetary efficiency is something else. Middleton and the parish have joined hands to maintain a continuity within the building which is now the parish's heart, but which was once its soul. 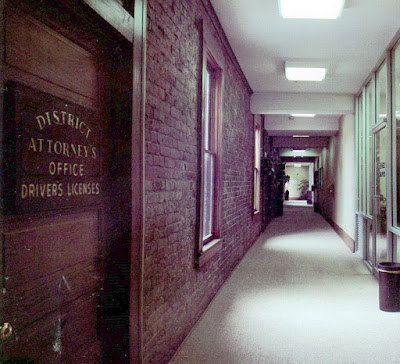 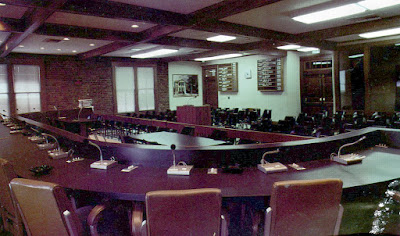 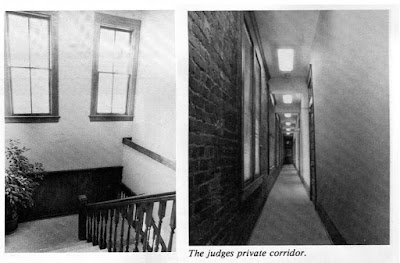 The 1981 Renovations of the Southern Hotel

A Video about the Southern Hotel

Businesses Located Inside the Southern Hotel