A larger-than-life statue of famed novelist Walker Percy was unveiled in Bogue Falaya Park Saturday afternoon, with scores of onlookers applauding. A brass band led a parade of white-linen attired residents and visitors from the Southern Hotel down to the park in Covington, and the special ceremony was hosted by Lisa Condrey-Ward with the Covington Public Art Fund. 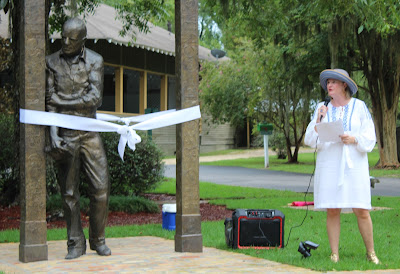 She welcomed everyone to the 'long-awaited' ceremony. "Everyone loves a parade," she said, noting that many of the people present were taking part in the "White Linen Night for Public Art" event in downtown Covington. "And everybody loves public art. On behalf of the Covington Public Art Fund, we are here tonight to formally dedicate the statue of Walker Percy."

She described how the idea for the project was born, named the several key people who helped make it come to pass, and particularly thanked the city for its agreement with the location of the artwork. Special thanks went to Patrick and Don McMath with McMath Construction, who donated the work of preparing the site, putting in a brick walkway, and actually transporting the statue to the site and setting it up. The Covington Heritage Foundation was acknowledged for donating the plaque telling about the statue and the person it honors, and Keep Covington Beautiful made the grass landscaping a reality.

Ms. Condrey-Ward went on to explain that while the statue of Walker Percy will provide a key community focal point, the Committee for Public Art Fund has also commissioned a bust of Walker Percy for display at the Covington Public Library. "Our mission is to facilitate public art in all of its various forms throughout Covington," she noted. Ten percent of all sales from participating retailers in downtown Covington will go towards public art during the "White Linen Night for Public Art" event, she went on to say. "White Linen Night has become a beloved addition to our downtown Covington events," she commented.

She then introduced sculptor Bill Binnings, thanking him for his creation. 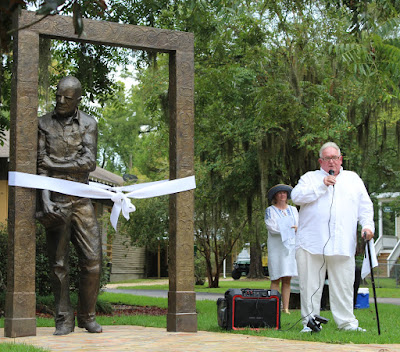 Binnings began his remarks by saying that art is an elusive thing, no living artist can declare themselves an artist. "That would be an audacious thing to do," he said. "As you look back in the history of art, you'll find that it actually defines cultures, defines the periods during which it was made."

Using that analogy, he concluded, "As we stand here today, as we watch the sands of time sift down around Walker Percy, we can definitely determine that yes, he was an artist."

Speaking about the influence of artists, what they do and what they represent, Binnings explained that works of art, whether visual, music, dance or whatever, raises the question of what does it mean? Does it mean something that elevates our spirit? Or does it mean something that diminishes our spirit? "Artists have the freedom of choice to do either," he said, "and Walker chose to elevate our spirits. What is history going to say about our times? We have the choice to elevate or diminish, we can choose which way the arts will go. Walker chose the words to elevate our lives."

Binnings hoped that the statue will help elevate the spirits of all those who see it. "We have a wonderful opportunity here with us," he said, "and I am glad the city of Covington has taken the opportunity to develop these things."

The statue's positioning was suggested by a phrase from Percy's novel "The Moviegoer" which reads "He put one foot towards the door, but neither quite stays nor leaves." Binnings hopes that by having the names of all of Percy's books lining the door frame, it will remind those who see the statue of his works, how they were affected by his writings, and what it all means in their lives.

Binnings stated that while he was a "non-literary friend" of Walker's, he had lunch with him almost every week. "We didn't talk business, but we talked ideas. He taught me how to layer ideas, he taught me that the idea of building ideas resembled how a sculptor builds a sculpture. He influenced me quite a bit."

Making the statue of his friend Walker was an incredible experience for Binnings. He thanked the "bunch of five old men" who assisted in the effort, working together in his home- made foundry in his back shed.  It was his second-largest work, he said.


On the door frame are the names of the novels Percy wrote. 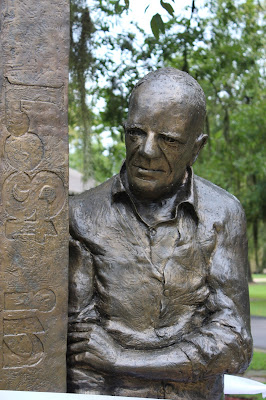 Mayor Mike Cooper told the crowd that it was certainly an honor to be present on behalf of the City of Covington. The statue of Walker Percy so prominently displayed is a wonderful addition to the park, he said, noting that the city already had a historical marker on Boston Street that tells about Percy's contributions and the fact that he is buried at St. Joseph's Abbey three miles north of town. But the statue located in the Bogue Falaya Park will be a welcome attraction, especially now that the park itself has just been named to the National Register of Historic Places. 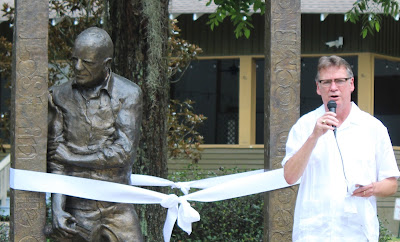 "You know, over the years, people have come to Covington in busloads, from all over the state, from all over the world, just to see the town where Walker Percy lived. Now we've got something where the public can see that Walker was one of our most esteemed citizens," the mayor stated.

He also credited Lisa Condrey-Ward with taking the original idea for the statue and expanding on it. He thanked Bill Binnings for his contribution to the project, saying that Binnings "is another one of our most esteemed artists in the community." 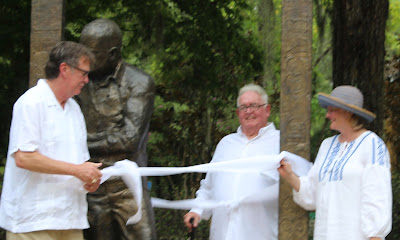 The removing of the gateway ribbon 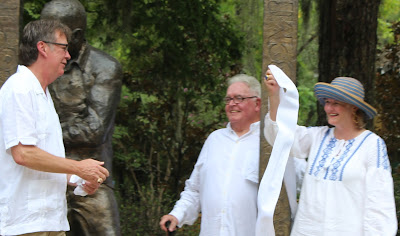 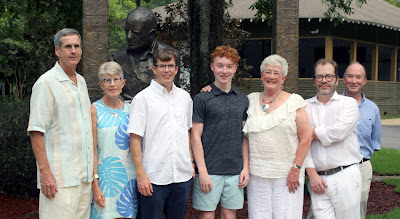 Several members of Walker Percy's family were on hand for the occasion and are pictured above following the ceremony. Mary Pratt Lobdell, Percy's oldest daughter, (third from the right) introduced her sister Ann (second from the left) and other members of the Percy family circle who were present.

She said that none of this would have happened without the efforts made by Lisa Condrey-Ward. She also acknowledged the patience and tolerance of sculptor Bill Binnings. "It was fascinating for me to see how all this came to be," she said of Binnings' work.  "Thank you so much."

A number of Percy's friends in the Covington arts circle were also present to witness the tribute to one of Covington's greatest artists and novelists. 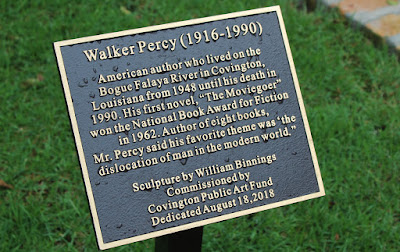 A plaque donated by the Covington Heritage Foundation explains the importance of the statue and what it means to the community. It notes that Walker Percy was born in 1916 and died in 1990. He was an American author who lived on the Bogue Falaya River in Covington beginning in 1948. The plaque goes on to say, "His first novel, "The Moviegoer," won the National Book Award for Fiction in 1962. Author of eight books, Mr. Percy said his favorite theme was the dislocation of man in the modern world."


Father Matthew Clark of St Joseph's Abbey delivered the blessing for the artwork, noting that Percy was a good friend of the Abbey, taught at the seminary, and shared his wisdom and wit with many of those from the Abbey. 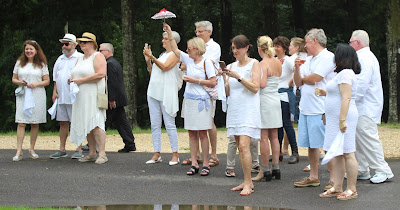 The ceremony was a festive occasion with more than 100 people taking part. 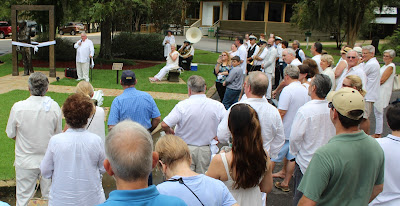 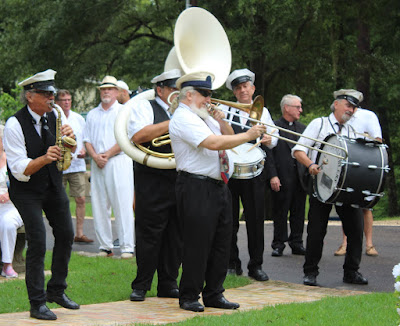 A band was on hand

Some came in costumes 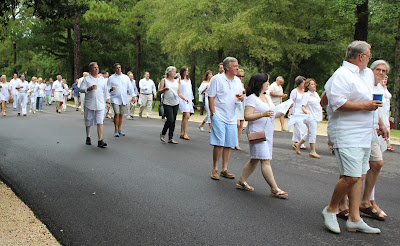 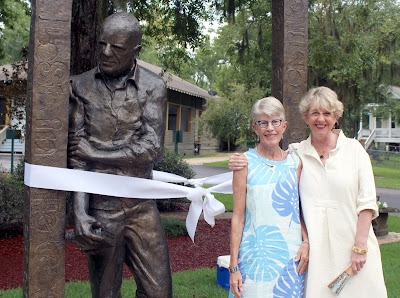 Photographs of the Statue 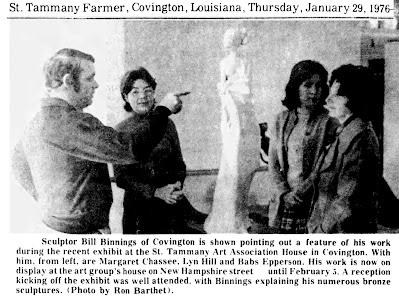 Binnings has been producing sculptures for area residents for decades.