Residents of St. Tammany today sometimes don't remember when the parish was divided in two, economically at least. There was the Covington, Mandeville, Madisonville end of the parish on the west, and the Slidell/Pearl River end on the east. Few people made trips from one to the other. 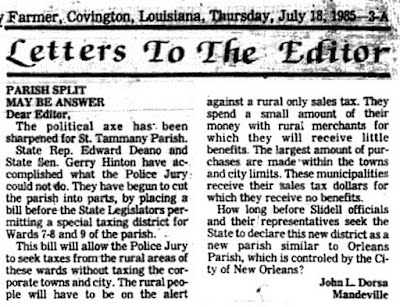 All that changed with the completion of the interstate through St. Tammany.

The local traffic going laterally from east to west also found that making the interstate highway a part of the route was often quicker. The police jury had not really invested much in building connecting roads east to west, so getting from La. 59 over to U.S. 190 was sometimes an ordeal that required using Sharp Road, Hotsy Totsy Road, Dog Pound Road, or Hwy 36 (or maybe even Soell Drive over to Helenbirg Road.) When the interstate came along, the choice included I-12 and that sped things up quite a bit.

Here's a Tammany Talk column I wrote in 1973 three years prior to the opening of the interstate. The high-rise bridge over the Tchefuncte River was going to be a big deal, since it re-routed cross country traffic from out of the middle of downtown Covington to a scenic drive over the river and through the woods. 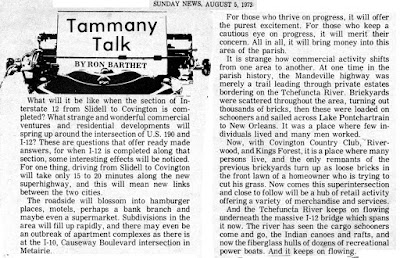 I remember the day in 1976 when I called the Louisiana State Highway Dept. and asked them when the last section in the Interstate 12 highway through St. Tammany would be completed, so that Covington and Slidell would be finally linked and traffic could get off  the side roads onto the four-lane superhighway. We all knew it was getting close to being finished.

I was surprised when the LDOT public relations guy told me he was glad I had called. A grand opening ribbon cutting had been scheduled atop the eastbound Interstate 12 bridge going over U.S. 190 between Covington and Mandeville in just two weeks. Not only that, but since we had called him he was going to let us (the St. Tammany Farmer) have the scoop.

Two days later the six column headline hit the Farmer newsstands that the interstate would be open in just two weeks, complete with ceremonies, guest speakers and visiting dignitaries. 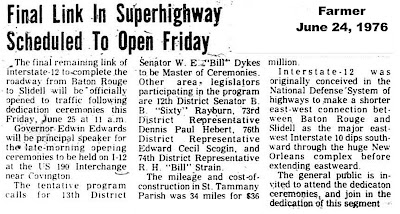 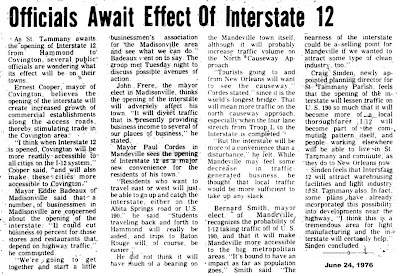 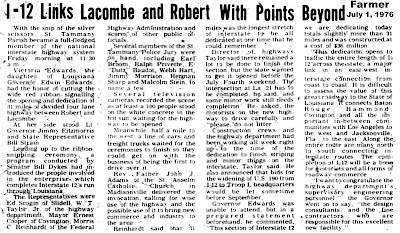 The last link in I-12 across Louisiana was opened on June 25, 1976, and both sides of St. Tammany Parish became better acquainted.