The story of an old pottery site discovered on Bayou Castine in Mandeville was told by Melba Colvin in an article published April 29, 1973. Her research unveiled many details on the operation of the pottery at the site which at the time was being threatened by a new boat launch project. 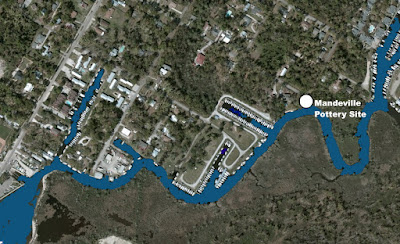 Here is the article.

MANDEVILLE — Bayou Castine in Mandeville is an old, scenic waterway, one with a rich history filled with mention of Indians, French explorers and enterprising businessmen when St. Tammany Parish was young.

The historic bayou was named by Bienville when he passed through the area in 1699, and was visited by Penicant and eleven other Frenchmen in 1705 through 1706 where they stayed for over a year. They came to the bayou when food supplies grew short at Fort Biloxi and stayed with the Colipassas and Nasitoches Indians.

It was this brief stay which produced detailed accounts of how these Indians lived.

The name Bayou Castine appears frequently in the old English and Spanish land  grants concerning areas in the vicinity of Mandeville. From ancient times, the bayou has played  an important part in the lives of the people living near it.

Today the bayou offers the people of Mandeville a harbor and a scenic border on the east. A recent proposal to build another boat ramp on the bayou has drawn opposition from some of the residents, however, since it appears the proposed boat launch would disrupt the site of an old pottery works that at one time was in full production on the edge of the bayou.

Melba E. Colvin, a resident of Mandeville, has done research on the pottery with archivist of St. Tammany, Mrs. Amos Neff, and has shown that the old pottery site is only an indication of the wealth of activity that once went on there.

The site of the proposed boat launching ramp at the foot of Monroe Street is known by many of the older residents as the "pottery" because of the many pieces of clay pottery, or shards, that have been found there.

Louis Vial has said that his grandfather had worked at a pottery there, and Walter R. Smith recalled that he used to obtain many loads of shell from the area for road building in the year 1912. He would use Tennessee wagons and double teams to transport the pieces of shell and clay found in the bayou there.

He also remembers seeing human skulls, bones and arrowheads among the pieces of pottery.

Indian Dances At The Pottery

Edgar Sharp, now 67, remembers that his father's older brothers would attend Indian dances at the "pottery" playing their violins for the festivity. These dances occurred between 1890 and 1900, Sharp recalled, saying that Indians from all over the area would gather for the dances, coming from Chinchuba, Lewisburg, Abita Springs, Lacombe, and Madisonville. Smith said that he remembered attending such Choctaw dances, also.

Prior to this, even, pottery was being made at the location.

Records from the St. Tammany Courthouse show that on February 7, 1848, there was an auction held to sell the pottery of Eugene Lamuloniere and his creditors to those of C. de la Bretonne and Co.

The business was described as being on land owned by Louis Coquillou who was Mandeville's first mayor, according to the records. The pottery was located on Bayou Castine (Castaigne on the map then) and pinpointed on an 1895 map.
There were two shops, one of which had an upper story for a wheel used to grind clay, four wheels for potters, boards for drying the wares and two kilns for firing them.

There were also four log cabins for lodging workman, a stable and three houses. The business was valued at $4,000 at that time. Another lot of ground in the same place was designated as the old "cannery" and consisted of a garden "well disposed" with a cottage for dwelling and "the materials from an ancient shop." All of this was valued at $300.

Among the other assets were "the earthenware remaining in the shop in Mandeville, on which a value of $300 would have been placed had it been dried, cooked and glazed."

Lamuloniere lists among the causes of his business failure a lack of activity throughout the business, or, in his words, "as having carried his passive to such a distance from his active: the fault of the bricklayer, having built the kiln in July of 1847." The structure collapsed during the first cooking and destroyed all the ware contained in it.

Two new kilns had to be built to replace the one that fell in and later four whole kilns full of ware wre lost because the pieces had been frozen, cracked in firing and were tossed out. This misfortune could be certified by books, witnesses, or by the enormous heap of broken pieces laying about the shop, said Lamuloniere.

He made a closing statement to the effect that the list of property contained all the articles he possessed, either moveable or immoveable, except the clothes and linen he and his family owned, his weapons, and his instruments necessary for the plying of his trade from which he made his living, as the law authorized.

The document was signed by Martin G. Penn, judge of the Eighth Judicial District at that time.

An attached list of 49 workers and creditors included the names of many whose descendants are now living in the area. Among those named were Hugh Spell of Mandeville, Francois Cousin of Bayou Lacombe, and Louis Coquille of Mandeville. Potters named in the list were Michel, Christian Edringer and Babcok, all of Mandeville.

Joseph Viab, a versatile man who would later build houses and schooners, was also among those named as workers and creditors.

The history of the "pottery" at the intersection of Monroe street and Bayou Castine is one of continuing interest for historians and sociologists of the area. It is hoped that the building of a boat ramp can be postponed or the location moved until more thorough research can be completed. 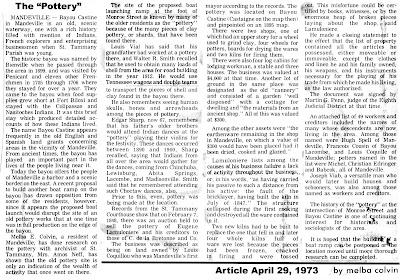 For years the parish had been commended for its potential for making pottery out of native clays. 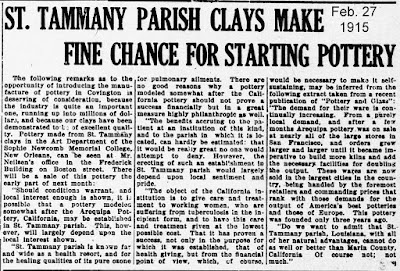