In 1814, Henry Marie Brackenridge published a travel account entitled "Views of Madisonvillle 1811." Here are two short descriptions of Madisonville taken from this early account. Click on the images to make them larger.

The account starts off by saying "Madisonville is handsomely situated on the west bank of the river Tchefonta, which rises and runs into Lake Pontchartrain in the parish of St. Tammany, in the state of Louisiana. At present this town has little more than the name, attached to an elegant, healthy, and eligible spot of ground for a seaport town. About half a dozen French built mud-walled huts, and about as many log houses or cabins, and two or three small frames are all its present improvements.

"Madisonville is favorably situated for coasting and West India trade, having about two days sail in going out, and about two weeks sail coming in, the advantage of New Orleans: it lies more convenient to the necessary supplies for repairing and building vessels; it is believed to be a more healthy situation, less infested with musketoes, and furnished with good spring water.

"There are few or no roads leading towards Madisonville. The Old King's Road, as it is called, leading in a direction from Baton Rouge to the Bay of St. Louis, a few miles from the Rigolets crossed the river Tchefonta about half a mile above Cockle Bank, now the site of Madisonvillle.

"Madisonville is understood to be chosen by the agents of the Navy Department for repairing, and even building of small vessels of war for the southern situation; and it seems particularly adapted to these purposes. The vicinity abounds with oak, pine and cypress, here also tar is made in abundance with as great facility as in any part of the Union. The spun hemp, or rope yarn of Kentucky, may be brought as cheap to this harbor as to any other, and the rigging may be laid to order at the navy yard with the greatest economy and advantage to the public service.

"Why, it may be asked, have not the singular advantages of this place sooner manifested themselves? The French were the first, and for many years the only civilized inhabitants in the vicinity of the Tchefonta. Enterprise is not one of the characteristic traits of the Louisiana French. 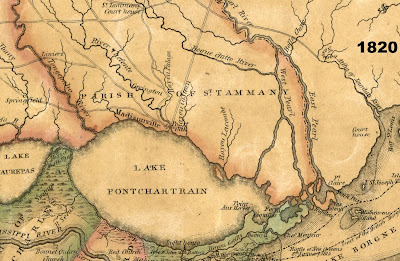 An 1820 map showing Madisonville and vicinity.

In the above map, the St. Tammany parish courthouse is in its old location near Enon, Washington Parish, and Post Oak is across the Tchefuncte River from Madisonville.
Posted by Ron Barthet at 3:00 AM