In 1986 the Tchefunce River Lighthouse was placed on the National Register of Historic Places. Here are the photos and text that accompanied that application. 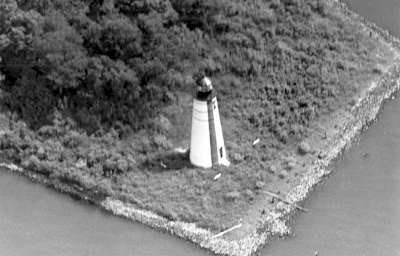 Click on the images to make them larger. Photos were taken in 1984. 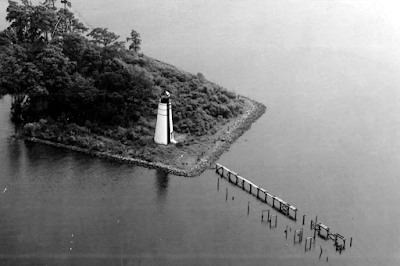 The Tchefuncte River Range Rear Light was submitted for entry to the National Register of Historic Places in February of 1984, and officially accepted on July 14, 1986. It is located on the north shore of Lake Pontchartrain near the mouth of the Tchefuncte River below Madisonville.

It is described as a cylinder brick structure, 30 feet tall from base to top. It is painted white with a black vertical stripe. Its latitude measure is 30-22-36 North and the Longitude is 90-10-12 West.

According to the application to the National Register of Historic Places, the Tchefuncte River Range Rear Light is significant because of its architecture. It embodies the distinctive characteristics of a type and method of construction common to the 1860's. Its level of significance is at the State level.

In the War of 1812, the Tchefuncte River (also spelled Chefunti, Chifuncta, etc.) distinguished itself as a Naval Yard. Madisonville, just above the mouth, remains as a small shipyard and yacht harbor.

A tower was erected at the mouth of the river in 1838 with a Fifth Order lens, its 10 lamps visible 11 miles. The lighthouse was rebuilt in 1857, about the same time as New Canal, across the lake. The 1886 light list shows the light on a 34-foot white tower, 38 feet above the lake and visible 11 miles.

Some rebuilding took place in 1867. Also that year, the lantern from the lighthouse at Cat Island was shipped to Tchefuncte. The Cat Inland tower had been damaged by a hurricane and burned at the outset of the war. Installation of the lantern was halted for four weeks in August and September 1867, by the Yellow Fever epidemic that swept through the Gulf Coast. The rebuilding was completed in early 1868.

The Station received the usual minor repairs and renovations until August 19-20, 1888, when a storm swept away all but the keeper's quarters and the tower. The outside kitchen, woodshed, washhouse, boathouse, and picket fence were among the structures destroyed.
The lighthouse is presently in full service, although automated. A black vertical stripe on the white tower improves its visibility as a daytime range marker. 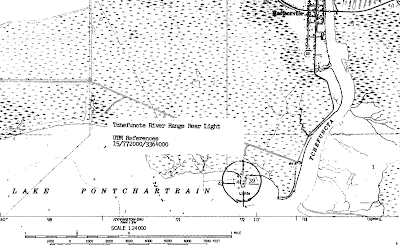 CLICK HERE to view video from a WGNO-TV report on the lighthouse.
See also:

Aerial photo of mouth of Tchefuncte River
Posted by Ron Barthet at 3:00 AM