Ships trying to get in and out of Lake Pontchartrain in the 1800's faced numerous challenges, one being the  Rigolets and the other being trying to find the actual opening for Bayou Bonfouca, the waterway that led into the Slidell area.  Transiting the Rigolets from the Gulf of Mexico and Mississippi Sound into the lake was made even more difficult at times by fog.

Here's where several lighthouses came to the rescue.

The Bayou Bonfouca lighthouse was built in 1848 and in service until 1862 when it was destroyed by Confederate soldiers. The Fifth Order lens atop a white dwelling was 39 feet above the lake, visible for 11 to 12 miles despite its having only four lamps.

According to a booklet entitled "Lighthouses and Lightships of the Northern Gulf of Mexico" by David L. Cipra of the U.S. Coast Guard, "The bayou is, and probably was, a relatively busy port and boatyard. But the light had the dual purpose of being a reference point or landmark for vessels transiting the eastern half of the lake between New Orleans and the Rigolets." 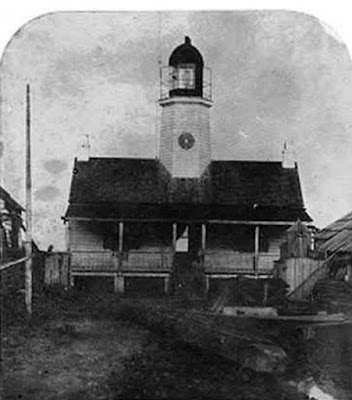 The lighthouse was totally destroyed during the Civil War when it was burned by Confederate Soldiers in 1862 and was never rebuilt, he said.  According to contributors to the Slidell history Facebook page, pieces and parts of the brick from the foundation wall of the lighthouse can still be found but are now partly submerged. 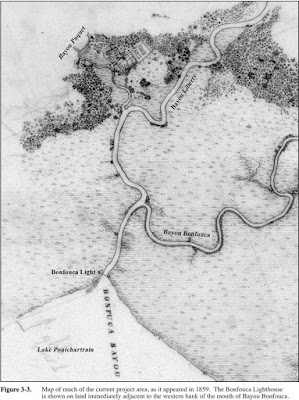 A map showing the location  of the "BonFouca Light"

"According to state documents, in 1847 a U.S. congressional bill provided $3,000 in funding to build a lighthouse at the mouth of Bayou Bonfouca and a two-room dwelling was built on top of a 5-foot brick foundation wall, with the base of the light tower located in the center of the dwelling.

"The structure and light were patterned after the wooden lighthouse at Pass Manchac, though the building was only one-story tall with a 9-ft. high central chamber situated between two side rooms that served as the residence for the keeper. The lantern itself was constructed atop the 12-ft tall light tower and was made to hold up to four small lamps but still was visible up to 11 to 12 miles away.

"It was finished in early March of 1848 and stayed functioning until burned by Confederate troops in May or June of 1862.

David L. Cipra wrote that the Point Aux Herbes Lighthouse was designed to replace the Bonfouca Lighthouse, although it was late in coming. It was built in 1875.

The site of the lighthouse was at Point Aux Herbes, where U. S. Interstate Highway 10 now leaves the south shore of the lake. The light was intended as a principal landmark between the Rigolets and Milneburg, or Port Pontchartrain, to replace the Bayou Bonfouca Lighthouse, that had been destroyed in the Civil War. 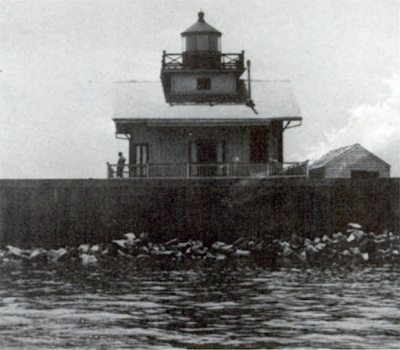 Cipra goes on to report that money for the light house was asked for in 1868, then made available in 1869 (but taken away in 1870). Due to financial setbacks and land title conflicts, the light was not in operation until August 1, 1875. "The Fifth Order lens rested on the keeper's dwelling. The building was 28 feet square and rested on five brick pyramids, rather than on iron piles, each four feet square at the base and eight feet high. The columns rested on two layers of 12-inch timbers and 18 inches of concrete."

He said that the local engineers were plagued by problems with sinking lighthouses and were apparently not willing to allow one more to disappear into the soft alluvial soil. This foundation is on a small scale similar to the massive base of the Southwest Pass Light.

A fire destroyed the superstructure of the lighthouse in the 1950's after its decommissioning after World War II. All that remains is the set of five brick foundation columns, portions of the breakwater and the boathouse pilings, all easily visible from the highway bridge.

At the east end of Lake Pontchartrain is a narrow waterway called the Rigolets, the only easily-navigable pass to the lake.

The West Rigolets lighthouse was constructed in 1854, when an appropriation of $5,000 was made "to mark the channel or passage called the Rigolets." The light, called West Rigolets, was in place "near Fort Pick" (probably Fort Pike) on the south bank of the pass. It held a Fifth Order lens atop a white keeper's dwelling, 30 feet above sea level and visible only 10 miles, the characteristics of a harbor light. 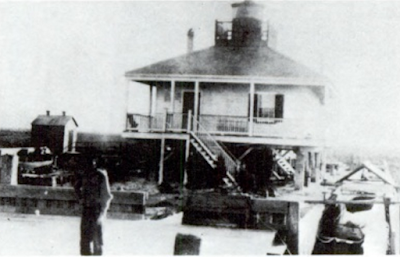 The West Rigolets lighthouse, after renewing its foundation in 1917.

The West Rigolets lighthouse was severely damaged in a gale in September 1869, Cipra said, but the building received extensive repairs the next year. In 1917, the structure was raised six feet and placed on a re-inforced concrete foundation. At the time of his writing ( the year 1976 ) , most of the lighthouse remained although it was in very poor condition and appeared to be ready to collapse.

This surveyor's sketch of the Rigolets, made in April, 1846, was compiled from earlier documents. Pleasonton's Island, possibly named for Samuel Pleasonton, who directed the Lighthouse Service at the time, is now called Rabbit Island.    It is located at lower right. 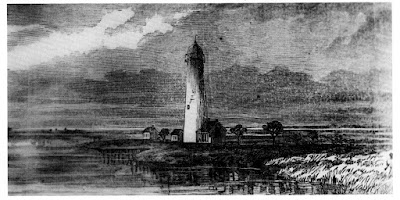 The original lighthouse for the Rigolets was this brick tower across from the mouth of the West Pearl River.   This old woodcut is from a Civil War edition of Harper's Weekly.

A whitewashed brick tower was built in 1833, its Fourth Order lens 65 feet above the low base and visible for 13 miles. The light originally revolved but by 1858 was changed to a fixed light with 10 lamps and 14-inch reflectors.


The light station was rebuilt in 1864, after Union forces had captured New Orleans, and the tower received a new lantern in 1867. To install this new equipment, workers found it necessary to tear down and enlarge the top four feet of the tower.

The light was discontinued on May 25, 1874, "it being no longer required for the purposes of navigation." Four years later, the Lighthouse Board changed its mind, asking Congress for $6,000 to re-establish the light. The pass had suddenly become hard to find at night.    The request was ignored, according to Cipra.

For more information on the East Rigolets Lighthouse, CLICK HERE.

Sentinel of the Centuries
Posted by Ron Barthet at 7:31 PM