Fourteen years ago, Hurricane Katrina plowed across Florida, and headed into the Gulf of Mexico. St. Tammany residents started getting uneasy. On Friday, August 26, 2005, the weather forecasters kept telling us that it was going to make a 90 degree northward turn once it got into the Gulf of Mexico and come on land somewhere around Pensacola, Fl. 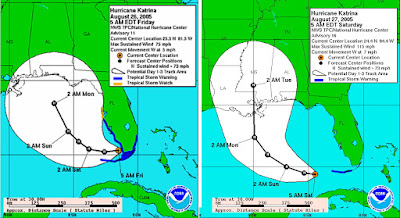 Huge hurricanes don't usually make 90 degree turns. Once Katrina got into the Gulf of Mexico it immediately started getting bigger and stronger, making it even less likely that it was going to make such a sharp turn.

Sure enough, by Saturday morning it became obvious that Katrina was turning "gradually" to the north and would make landfall around Biloxi, or, in the very worst scenario, at New Orleans. St. Tammany residents got busy and started making preparations. Usually we have three or four days to get ready, but in Katrina's case it became apparent we were in trouble only two days before landfall, waking up on Saturday morning to alarming news. 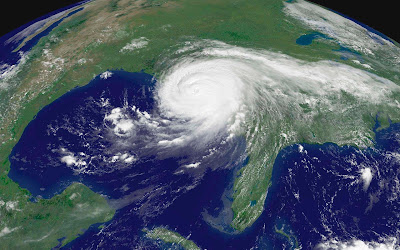 People who lived near the water started putting things on high shelves or upstairs if they had a second story. No one had ever seen (or remembered seeing) a "storm surge" of 12 to 20 feet.

We filled bathtubs with water, stocked up on water bottles, and gathered up all the loose lawn items, and parked the vehicles in the middle of the open yard away from the trees.

We only had a day to board up windows. Some residents had saved plywood coverings from previous storms, so they re-installed those. Others had to make hurried trips to the lumber yard for plywood of whatever size and thickness they had left.

Getting Out of Dodge

Those corridors became parking lots. Many of those people ran out of gas (and thus air conditioning,) drinking water, and patience.

Many people decided to stay and "ride out the storm." I had ridden out a few storms, but had learned it's not a good idea to subject your family to eight to ten hours of huddling in a dark house with winds roaring, rain pouring, and trees crashing all around.

Some went to Baton Rouge, which, as it turns out, wasn't far enough to escape the power outages and wind damages to trees. Others heading out of New Orleans had to drive as far as they could until they either ran out of gas or found a motel with a room still available. Many of those evacuees never went back to New Orleans. 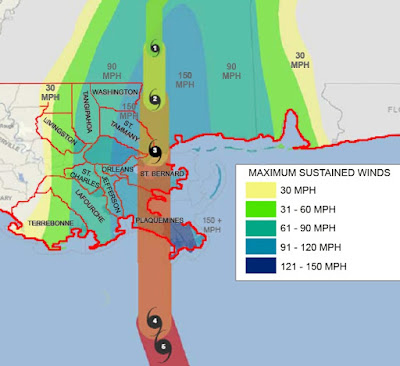 Monday, August 29, was the day that belonged to Katrina. The storm roared into land just east of New Orleans, at about the Louisiana/Mississippi state line. That put the worse wind and water and storm surge at Bay St. Louis and Pass Christian, Mississippi. A wall of water over 20 feet high hit Pearlington. A 12 foot storm surge swept across Slidell. The eye of the hurricane lumbered northward towards Bogalusa. 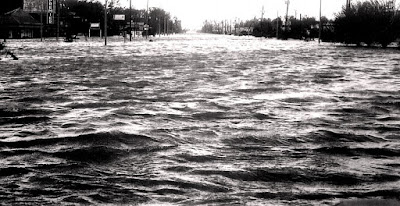 The storm continued northward causing considerable damage to Tylertown and Hattiesburg, and even further north. But the real unimaginable damage was in New Orleans and the Mississippi Gulf Coast. 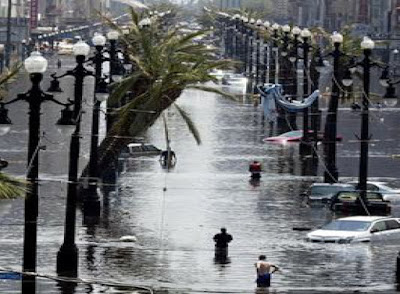 Monday was a horrific day for New Orleans. Monday night was even worse. The city had been hit not only by hurricane-force winds and torrential rains, but also by storm surges that had punctured the levee system in several places, flooding across the Crescent City. It was devastating. New Orleans was paralyzed by wind, water, and lawlessness. A police officer told me later that the full extent of the chaos in New Orleans after Katrina would probably never be told.

The Sound of Chain Saws

On Tuesday people gradually emerged, took a look around, and were astounded by the damage. Neighbors began checking on their neighbors, scrounging up what food they could, eating first what was already defrosting in unpowered freezers. People with chainsaws ventured forth, clearing first the trees that blocked their driveways, then the trees from the roads that passed by their house. By the end of the third day, most of the rural roads and state highways were passable, thanks to individuals with chainsaws.

Some construction personnel with bulldozers didn't even bother cutting the trees out of the way. They just shoved them to the side so people and emergency personnel could pass.

That New Orleans flooded due to levee breaks was a disaster story in itself, and large portions of Bay St. Louis and Pass Christian, MS, were wiped down to the slabs. A gambling casino floated hundreds of feet and came to rest on top of the highway in Gulfport. The Slidell I-10 twin span and every bridge on the Mississippi Gulf Coast was pushed sideways like a child's building blocks. 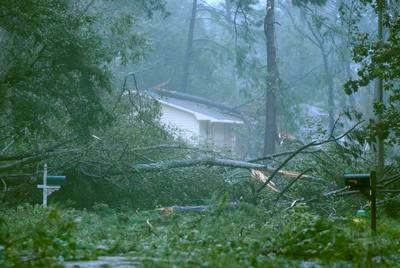 Trees had fallen, slicing through roofs of every other house in most areas. Blue tarps went up everywhere to cover the gaping holes in the roofs.  Refrigerators filled with spoiled food were carried out of kitchens and put out next to the roads for somebody else to deal with. 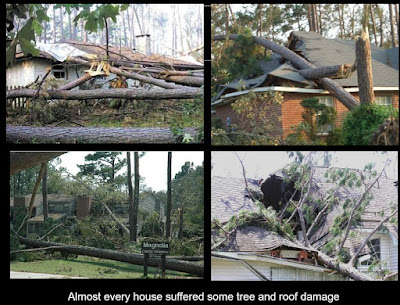 And the clean up crews did deal with them. Scores of trucks making regular neighborhood runs, grappling up the piles of debris and taking them away to designated areas where the debris could be piled up and set on fire.

ATM's were out of operation, banks were closed, the entire city of New Orleans was barricaded off for three or four weeks before people were let back in. 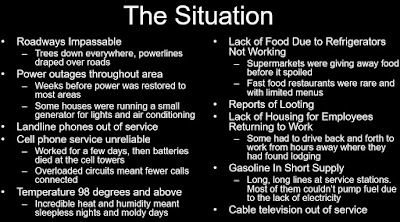 The mold. Inside the walls. Then on top of that, some of the sheetrock dry wall that was installed to replace soggy moldy sheetrock turned out to be outgassing corrosive fumes itself.

Thousands of FEMA trailers began piling up in open fields north of New Orleans, waiting to be delivered to people who needed them.  Some of them were never delivered. 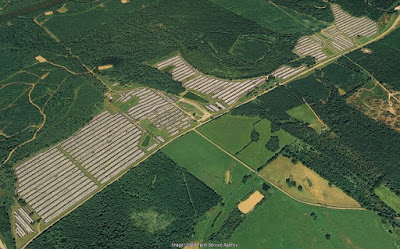 Efforts were mounted to save the lost and abandoned pets, the dogs, the cats, some of which were left behind by evacuating owners, others who lost their owners to the flood waters. Hundreds of animal rescue personnel were sent into the worst areas to try to round up and capture the panicked exhausted pets. Humane societies far across the countryside were packed with rescued animals. The search began to re-unite them with their owners, or find them new homes.

Gradually, the power came back on. It took a month in some places, but electric company work crews poured in from everywhere, untangling the lines, removing the broken light poles and installing new ones. The wires went back up, the power was restored, and people rejoiced when the lights came back on (along with the air conditioning.)

People who had no houses were living in tents, church recreation halls, Red Cross shelters, small travel trailers that had at one time only been used for vacation trips, and, of course, FEMA trailers.

The thousands of New Orleans residents who were rescued from the flooded out freeways, from the Superdome, and from the airport- they were put on buses and transported outward, and then even further, winding up in places where they had to rely on the kindness of strangers just to survive. I searched the internet, and almost every local newspaper in every small town across the South had an article about two or three New Orleans residents or families who had been adopted by local residents. They were given food, clothing and shelter. Jobs were offered and accepted. Schools enrolled new evacuee students without records and paperwork.

From all across the nation, people began searching for relatives, for friends, wondering if they had survived, or where they had been taken in the confusion. Internet bulletin boards were filled with desperate pleas for help in locating folks who had disappeared in the chaos. Sometimes the outcomes of those searches were miraculous, sometimes tragic.

The property insurance industry in Louisiana was never the same again.

Hurricane Katrina became a lesson, not only in weather, storm surge floods and loss of electricity, but on the goodness of neighbors working together, of parish agencies and local city governments functioning even though stressed beyond their limits, of good people doing extraordinary things, and extraordinary people providing incredible public service, many without pay.

The volunteers from across the U.S. who swarmed into the area to help were astounding: church groups, civic groups, business community groups. Towns from throughout the country sent their police officers, firefighters, search and rescue squads to help in any way they could. Many of the bonds forged between communities at that time are still strong today.

I eventually wrote a letter to the editor thanking all those people with chain saws who went out and started cutting apart and removing fallen trees within hours of the storm having passed through. They were symbolic of all the people who stepped up, got to work, and saved lives even while many of us were still wandering around dazed and in a state of shock at the destruction. 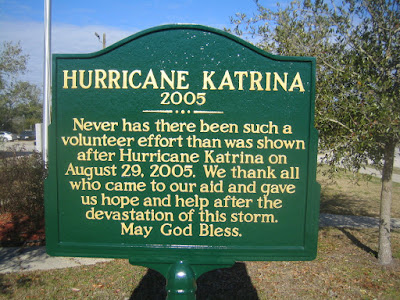 A historical marker in Waveland, MS


May there never be another Hurricane Katrina, but if there is, may it always be followed by that overwhelming response where neighbors help neighbors however and wherever they can.
Posted by Ron L Barthet at 8:47 PM