Fishing In The Street

In the early 1990's the Three Rivers Basin Foundation sponsored a street painting of a river, complete with fish stencils.

According to Elizabeth Moore in her column published in the Times Picayune, "River forming on Covington street" The three rivers of our area — Abita, Bogue Falaya and Tchefuncte — are being joined by a fourth river that has already started to gracefully meander down New Hampshire street. 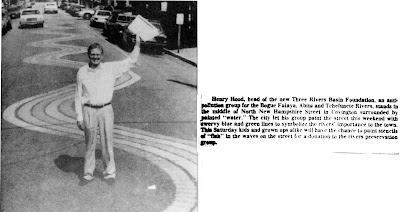 "The new river begins at the old Covington depot, and will end by spilling into a big lake at the en­trance of Bogue Falaya Park. The New Hampshire Street river is being created with paint rollers in swirling patterns by members of the Three Rivers Basin Foundation.

"The threads of color will change in hue at the lake, which will feature choppy waves. On Saturday, in con­junction with the Scarecrow Festival, children and adults can ° "Paint the River." Fish stencils and supplies can be rented for $1.

"Participants may sign their  names to their piscine creations, and the fun will go on until the waters teem with fish. The paint used is non-toxic. The stencils are made by local artists, and will be freshwater, fanciful, or "just plain fun" fish.

"Artists who are involved in the venture are Jane Adams, Robin Hamaker, John Hodge, Gail Hood, Suzanne Longo, Bunny Matthews, Francie Rich and  Peggy Schoen. Other local artists are encouraged to offer their tal­ents and get involved in a project that is not only enjoyable but environmentally important.

"The river is the brain child of the Three Rivers Basin Founda­tion. Henry Hood, president, said, "We want to focus attention on our three rivers, and to teach people the resource value of the rivers. We can't let them get any more polluted, and we need to correct the wrong that we've been doing for years. We hope to re­store the rivers to their original beauty."

"The Three Rivers Basin Foun­dation has given educational packets to 24 schools. Teachers and school children are encour­aged to study the rivers. The school with the most student par­ticipation in "Paint the River" wins a prize. The non-profit Three Rivers Basin Foundation was formed  about six months ago. Mem­bership has topped 100. Besides Hood, the executive board con­sists of Michael Conroy, vice president; Uncas Favret, trea­surer; and John Seago, secretary. 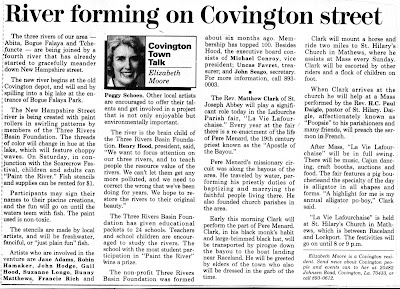 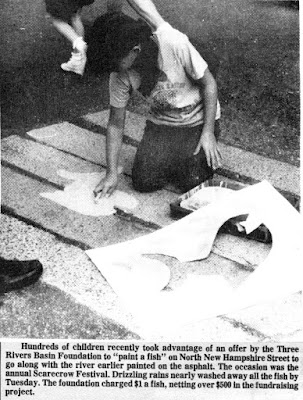