In the 1930's automobile trips were popular, and many pre-arranged annual excursions were put together and advertised to showcase local and regional attractions that a family would enjoy seeing on a day's outing in the country.

The folks in New Orleans would climb into their cars on the weekend and head north to St. Tammany. It was quite an adventure. This was before the Lake Pontchartrain Causeway, before good paved roads in many areas, and few rest stops.Click on the images below to make them larger. 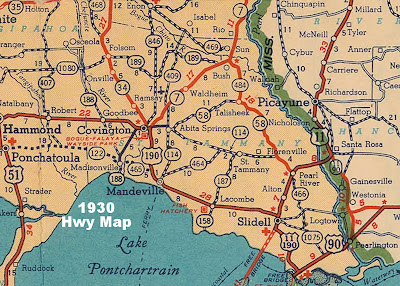 A state highway map from 1930. Note the ferry crossing the lake landing at Mandeville. Hwy 122 (La. 22) from Madisonville to Ponchatoula was still a dirt road.

Above is a road map of St. Tammany in 1930, showing the highways available to the travelers back then. Several highway numbers have been changed over the years. Notice that the highway between Covington and Folsom was numbered Hwy. 34, not the La. 25 that we know today.

That is important because the "Spring Fiesta Tour of St. Tammany" held in the Covington area in 1939 began at the intersection of Hwy. 34 and U.S. Hwy. 190.

We have a handout sheet telling of the 1939 Spring Fiesta Tour attractions along the way, with mileage counts (down to the tenth of a mile). 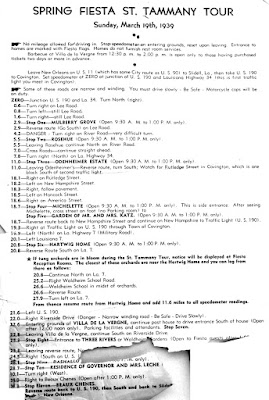 Among the places highlighted on the tour were Mulberry Grove, three miles out of Covington on Lee Road; Rosehue on River Road; north on La. 34 to the Odenheimer Estate (which was north of the Girl Scout camp on La. 25); and Michelette, a home located on America Street in Covington. 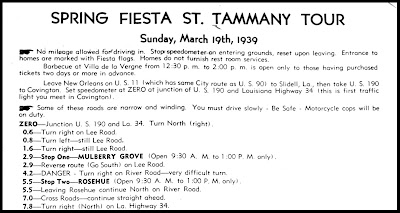 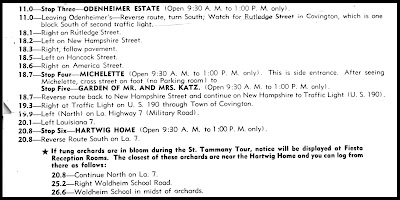 From there they walked over to the garden of Mr. and Mrs. Katz. The tour proceeded then to the Hartwig Home on La. Hwy. 7 ( which is today's La. 21). Travelers were then guided up La. 25 to the tung orchards (if they were still in bloom). 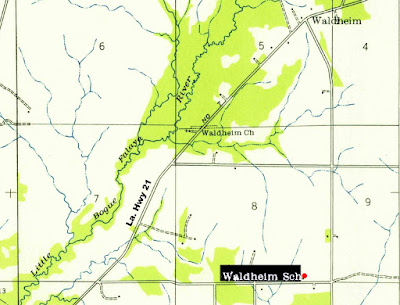 The Waldheim School was located on La. Hwy. 1084, just west of its intersection with La. Hwy. 1083. The tour guide stated it was in the middle of a tung tree orchard.

Returning to Covington, tour participants were instructed to turn onto Riverside Drive (now with Popeye's on the corner) and proceed to Villa de la Vergne. After de la Vergne they continued down Riverside Drive to Three Rivers estate, also known as Waldheim Gardens.

Leaving the Covington area, the tourists stopped at Dashallo on U.S. 190 as well as the nearby residence of Governor and Mrs. Leche. The Spring Fiesta tour ended at a place called Beaux Chenes (and this was long before the subdivision known as Beau Chene came along.) 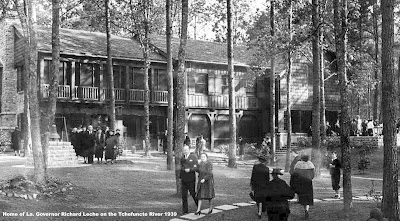 A 1939 photograph of the home of Gov. Richard Leche
(from the Times Picayune photo archives)
Posted by Ron Barthet at 7:00 AM