On November 11, 2011, a ribbon cutting was held at Walter L. Abney Elementary School in Slidell, celebrating the completion of extensive renovations and re-dedicating the school to the community. A number of Slidell area public officials, School System leaders, and Abney family members attended.

A number of photographs from 40 years earlier were on display. Click on the images below to enlarge them.

Community leader and former School Board member Walter L. Abney was honored by a refinished Wall Plaque unveiled by members of the Abney family (including two who taken part in the school’s original 1970 dedication as children) and Superintendent Trey Folse. 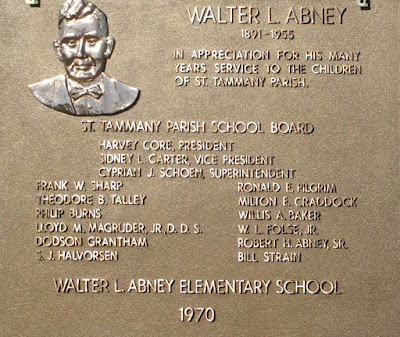 In 1970, when the school was first named in honor of Mr. Abney, the Superintendent at the time Cyprian J. Schoen said, “The Board is indeed happy to have one of our schools named after a member of one of the families closely associated with the progress of the St. Tammany Parish Public School System.” 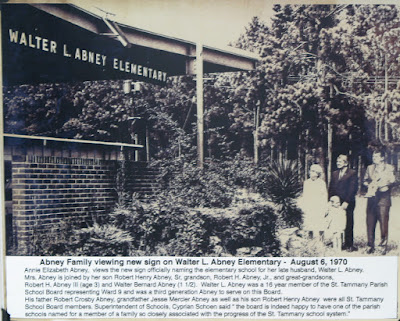 Praise for Mr. Abney was also voiced at the time by W. L. “Bill” Folse, II,  the current Superintendent’s father, who was president of the School Board in 1970. He said, “Walter L. Abney’s name will live on through the many thousands of children who will attend this school which we now dedicate in his memory.” Mr. Abney was born in 1891 and died in 1955. 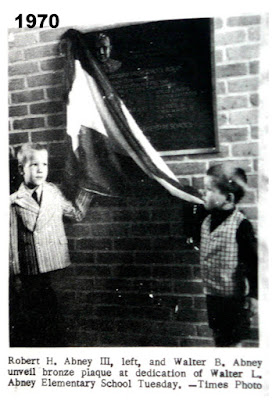 At the 2011 re-dedication, Principal Robert “Mike” Alford stated that children from south Slidell have begun their education journey at the site of Abney Elementary for nearly 50 years. The school's 50th anniversary was held in 2014. “The school began in 1964 as South Side Elementary,” Alford said. “The School  Board renamed the school Walter L. Abney Elementary in honor of a great gentleman who spent his life helping the citizens of South Slidell, in particular the young people.” Mr. Abney served 16 years as a School Board member from the late 1920’s to the early 1940’s, in addition to his work as a farmer, grocer, butcher, and landowner.

Thousands of students have attended the school over the years, Mr. Alford noted, many of them going on to become the area’s most productive adult citizens. 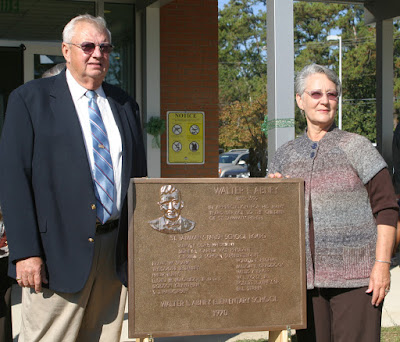 At left is Robert "Bob" Abney, Jr., and at right is  Lynn Abney.