In the early 1910's, the Southern Manufacturer Co. published a booklet extolling the virtues of the northshore of Lake Pontchartrain, primarily Covington and Slidell, but also Bogalusa, Franklinton, Lacombe, Folsom and Mandeville. It was called "Along The Line of the New Orleans Great Northern Railroad in Louisiana."

Over the next week, I will be publishing scans of the various parts of that booklet.Today is the general introduction and a variety of items and ads from the illustrated pamphlet. 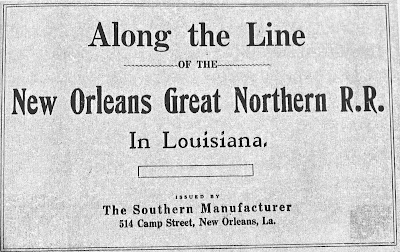 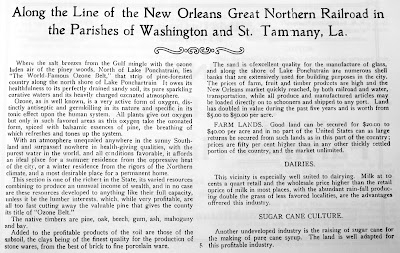 Where the salt breezes from the Gulf mingle with the ozone laden air of the piney woods, North of Lake Ponchartrain, lies "The World-Famous Ozone Belt," that strip of pine-forested country along the north shore of Lake Pontchartrain. It owes its healthfulness to its perfectly drained sandy soil, its pure sparkling curative Waters and its heavily charged ozonated atmosphere.

Ozone, as is well known, is a very active form of oxygen, distinctly antiseptic and germkilling in its nature and specific in its tonic effect upon the human system. All plants give out oxygen but only, in such favored areas as this oxygen take the ozonated form, spiced with balsamic essences of pine, the breathing of which refreshes and tones up the system.

With an atmosphere unequaled anywhere in the sunny South­land and surpassed nowhere in health-giving qualities, with the purest water in the world, and all eruditions favorable, it affords an ideal place for a summer residence from the oppressive heat of the city, or a winter residence from the rigors of the Northern climate, and a most desirable place for a permanent home.

This section is one of the richest in the State, its varied resources combining to produce an unusual income of wealth, and in no case are these resources developed to anything like their full capacity, unless it he the lumber interests, which, while very profitable, are all too fast cutting away the valuable pine that gives the county
its title of "Ozone Belt."

Added to the profitable products of the soil are those of the subsoil, the clays being of the finest quality for the production of stone wares, from the best of brick to fine porcelain ware.

The sand is of excellent quality for the manufacture of glass, and along the shore of Lake Pontchartrain are numerous shell banks that are extensively used for building purposes in the city. The prices of farm, fruit and timber products are high and the New Orleans market quickly reached, by both railroad and water, transportation, while all produce and manufactured articles may be loaded directly on to schooners and shipped to any port.

FARM LANDS. Good land can be secured for $20.00 to $40.00 per acre and in no part of the United States can as large returns be secured from such lands as in this part of the country; prices are fifty per cent higher than in any other thickly settled portion of the country, and the market unlimited.

This vicinity is especially well suited to dairying. Milk at 10 cents a quart retail and the wholesale price higher than the retail oprice of milk in most places, with the abundant rain-fall producing double the grass of less favored localities, are the advantages offered this industry.

Another undeveloped industry is the raising of sugar cane for the making of pure cane syrup. The land is well adapted for this profitable industry.

Truck gardening and small fruit culture is sure of a safe market at very high prices, and a most desirable outdoor employment for one whose health demands such an occupation. The finest straw­berries in the world have been successfully grown on these lands.

Hay-making and early vegetables are also very profitable. The soil is admirably suited to the growth of berries and small fruits, as well as nearly all large fruits that grow in a semi-tropical climate. Wherever the proper attention and precautions are given-—in the selection of varieties, planting, pruning, cultivation, fertilizing and protecting from insects—the prolificness and quality are not to be excelled.

Long has grape culture in this section stood second to none in the South for quantity and quality. There is the wild grape, from which many of our best and most profitable varieties have originated, while we admit the more improved varieties prove more profitable when given thorough cultivation and care.

There are many persons here who have succeeded in raising all the peaches they care to have for family use, and some few who have raised them for shipment successfully. The Elberta seems to be the most profitable variety.

Both the Lacomte and Keiffer Pear thrive well and bear profusely. Quite a number of wild berries, such as dewberries, black-berries, huckleberries, wild grapes and muscadines and cranberries, grow in abundance all of which are splendid for preserving,etc.

Stock raising might he classed as one of the most profitable undeveloped industries in this country. Our grazing lands are not to be excelled and nearly all feed can be raised in our own fields. Stock cattle thrive nine months in the year without feed, and many of our native cattle are never fed at all.

This is the Hunter's and Fishermen's Paradise even the smaller streams are thronged with members of the finny tribe. Deer, Turkey, Ducks, Squirrel and Quail are plentiful.

This section has become noted because of the high quality of purest drinking water. There are thousands of flowing wells throughout the parish, the majority of which contains such essential minerals as Sulphur, Iron and Magnesia.

COTTON.
This, the South's great staple, is cultivated on an extensive scale, the lands yielding from one to one and a-half bales per acre.

MANUFACTURING.
Immense possibilities, now lying dormant, in practically every line of manufactory are here presented the capitalist Raw material is abundant, labor is reliable and as cheap as anywhere in the United States. 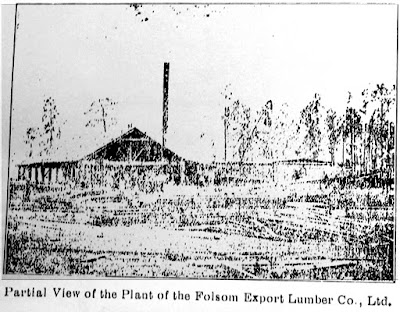 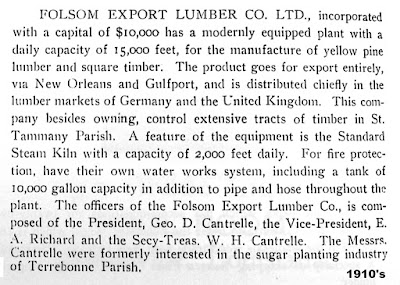 FOLSOM EXPORT LUMBER CO. LTD., incorporated with a capital of $10,000 has a modernly equipped plant with a daily capacity of 15,000 feet, for the manufacture of yellow pine lumber and square timber.  The product goes for export entirely, via New Orleans and Gulfport, and is distributed chiefly in the lumber markets of Germany and the United Kingdom.

This company besides owning, control extensive tracts of timber in St. Tammany Parish.  A feature of the equipment is the Standard Steam Kiln with a capacity of 2,000 feet daily.   For fire protection, have their own water works system, including a tank of 10,000 gallon capacity in addition to pipe and hose throughout the plant.

The officers of the Folsom Export Lumber Co., is composed of the President, Geo. D. Cantrelle, the Vice-President, E. A. Richard and the Secy-Treas. W. H. Cantrelle.  The Messrs. Cantrelle were formerly interested in the sugar planting industry of Terrebonne Parish. 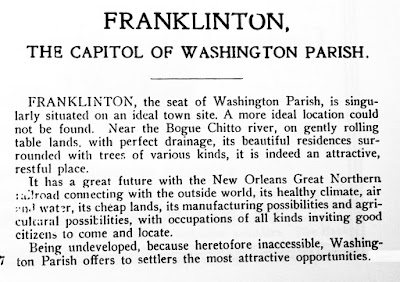 FRANKLINTON, the seat of Washington Parish, is singularly situated on an ideal town site. A more ideal location could not be found. Near the Bogue Chitto river, on gently rolling table lands, with perfect drainage, its beautiful residences surrounded with trees of various kinds, it is indeed an attractive, restful place.

It has a great future with the New Orleans Great Northern Railroad connecting with the outside world, its healthy climate, air and water, its cheap lands, its manufacturing possibilities and agricultural possibilities, with occupations of all kinds inviting good citizens to come and locate.

Being undeveloped, because heretofore inaccessible, Washington Parish offers to settlers the most attractive opportunities. 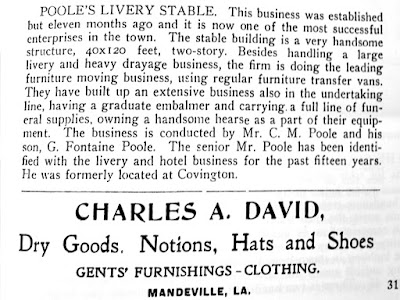 This business was established but eleven months ago and it is now one of the most successful enterprises in the town. The stable building is a very handsome structure, 40x120 feet, two-story. Besides handling a large livery and heavy drayage business, the firm is doing the leading furniture moving business, using regular furniture transfer vans.

They have built up an extensive business also in the undertaking line, having a graduate embalmer and carrying, a full line of funeral supplies, owning a handsome hearse as a part of their equipment.

The business is conducted by Mr. C. M. Poole and his son, G. Fontaine Poole. The senior Mr. Poole has been identified with the livery and hotel business for the past fifteen years. He was formerly located at Covington. 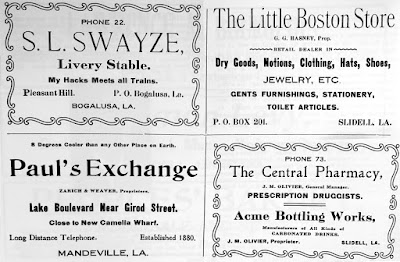 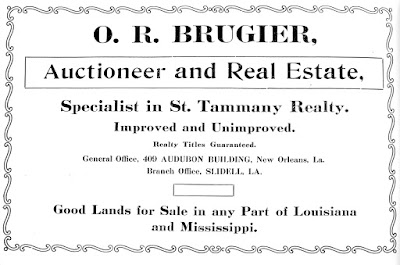 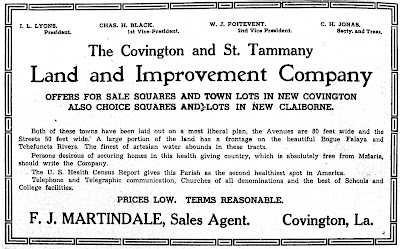