Over the years, several articles and a history has been written about St. John the Baptist Catholic Church in Folsom, which will celebrate its 100th anniversary in May of 1921.

From the church's website, here is the text telling about the history of the church:

A New Old Church for St. John the Baptist

It was 1920 when Fr. Odilo Alt, OSB traveled north from St. Joseph's Abbey in Covington, LA in search of Catholics. Just west of Folsom, LA he found much more than he thought possible.

He found a settlement of over 60 people who called themselves Catholic, although only the very oldest had been baptized and none had seen a priest for over 40 years.

A local barn was converted into a temporary mission church and the task of baptizing and teaching began. Fr. Odilo said the first Mass in the Mission Church of SJB on April 11, 1920. The Parish was established in 1921.

In 1934, the nearby Chinchuba Institute suffered a devastating fire. All that remained was the church awaiting a new home. In 1939, the church was dismantled and reassembled in Folsom. The transition started in 1939 and culminated in the dedication which occurred on May 13, 1940.

The Little "Cathedral in the Woods"

Dedication of the New Church

On a May morning, 1941, Dedication services for the new church recently erected at St. John the Baptist Mission near Folsom were held with the Rt. Rev. Columban Thuis. O.S.B., Abbot at St.Joseph’s Abbey, at St. Benedict, delegated by Most Rev. Joseph F. Rummel, Archbishop of New Orleans, and with many visiting clergy in attendance.

The procession, headed by the cross-bearers and the St. Joseph’s Seminary band, under the direction of Rev. Robert Laplace, O.S.B., with the St. Joseph’s Abbey cantors chanting liturgical music, marched to the front of the church where prayers were sung. Parishioners and friends were at the dedication of the new St. John the Baptist mission church with Father Odilo Alt.

According to the church's website, the mission was started in 1921, some 98 years ago, when Father Odilo, riding horseback through what was then virgin pine woods in St. Tammany parish, came upon a little group of children and found that they knew nothing of church nor school.

Filled with Apostolic zeal, Father Odilo first held services in the open, giving instructions along the roadside. Later he found a barn in which to hold classes and then erected a simple church. Approximately 50 children now attend the school daily and almost 250 people, representing 34 families, make up the congregation of the mission.  Father Odilo obtained permission from Archbishop Rummel to dismantle the church at the old Chinchuba Deaf-Mute Institute on the Covington-Mandeville Highway and transfer it to the mission.

In 2003, Louis Lavedan created a pamphlet on the history of St. John’s.  Click here to view the pamphlet as a PDF file. 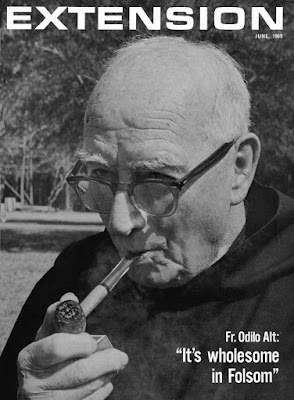 In June of 1969 Extension Magazine ran an article about Father Alt. Here is the text from that article:

It's Wholesome in Folsom
by George Lundy

"My Sunday collection used to average between 20 and 252. After a baptism, the people would offer sweet potatoes and peanuts. "This," said Fr. Odilo Alt, O.S.B., "was extremely gen­erous for such a small commu­nity fifty years ago."

The 78 year old priest coaxed some action out of his corncob pipe with a wooden match and then recalled some of the more exciting experiences of his life as a missionary in Folsom, La.

There was an evening, for in­stance, when Fr. Alt was return­ing from a sick call astride his faithful horse, Chief. Two men jumped from behind trees and grabbed the horse's bridle. Chief reared up and kicked one of them, causing a painful outcry. Though they were hooded and unidentifiable, Fr. Alt was sus­picious of one local citizen who had a limp for a month after the incident.

Although there were other problems involving hooded men, Fr. Alt prefers recalling the more pleasant aspects of his long and fruitful missionary career at St. John the Baptist in Folsom.

One of his favorite topics is the team of EXTENSION Vol­unteers who have been working with him during the past year. Jeanmarie  Troy  of Highland Park, 111. and Kathy Lauer of Winona, Minn, literally carry Fr. Alt's CCD and social work load.

The girls came to Folsom in the summer of 1968 with the primary assignment of teaching CCD, and the hope of Fr. Alt that they could find time to do social work.

The results of their year in Folsom have been very gratify­ing to the entire community. They are teaching CCD . . they set up and are operating a kin­dergarten program . . they orga­nized a teen club and promoted
recreational equipment for it . . and they were able to "find time" for social work. Their ca­pacity for accomplishment far exceeded Fr. Alt's fondest dreams.

The mission buildings of St. John the Baptist in Folsom are old by any yardstick . . but they look comfortably settled into the woody area they occupy. The only shelter that breaks the pattern of antiquity is the mobile home that Kathy and Jeanmarie reside in.

But an old mission area is more than log cabins and horse drawn plows. St. John the Bap­tist came into existence official­ly in 1920 after Fr. Alt had done the necessary spade work. It was in that year that EX­TENSION sent a grant to help with the construction of a small frame chapel. After the chapel ;was complete, EXTENSION, through her benefactors, sent vestments, candlesticks, chalice, ciborium and other necessary furnishings.

Fr. Alt, St. John's first and only pastor, keeps a special in­tention in his masses for EX­TENSION benefactors because as he points out, the span of Extension help runs from 1920 through 1969.

When the original chapel was replaced, it was not torn down. For many years it was used as a schoolroom. It was reactivated again by Extension's volunteers and now houses the teen club. 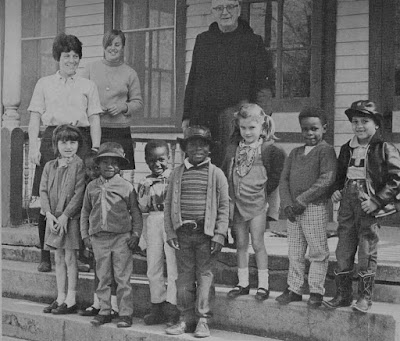 St. John's kindergarten and teen club are open to the en­tire community regardless of race or religion. This reflects an attitude that Fr. Alt brought to Folsom fifty years ago. "We are all God's children and should be treated as such." 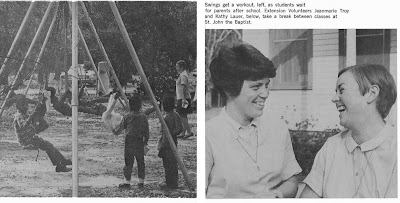 Be­cause Fr. Alt has practiced this Christian tenet, he has earned a reputation for being eminently fair to everyone. With the help of Extension Volunteers, Kathy Lauer and Jeanmarie Troy, it has become a community by­word . . . with the inevitable result, "It is truly wholesome in Folsom." 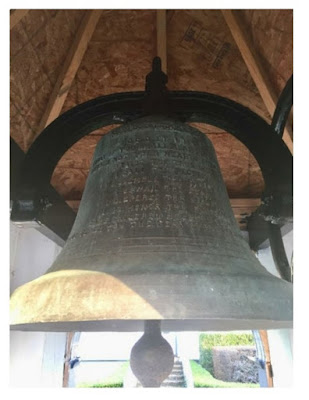 A New Home for an Old Bell

On November 22, 2015, a new home in front of the church was built and the bell was re-dedicated. The letters on the bell are made as the arms of a cross on the Benedictine medal.

The History of Folsom
Posted by Ron Barthet at 4:30 AM