The Covington Heritage Foundation hosted a fun and informative event in the 300 block of North New Hampshire St. on a recent Sunday afternoon. Around 80 people attended, listening to speakers tell about the history of the Star Theater, the old Courthouse (now the Emergency Operations Center), the Southern Hotel and the St. Tammany Farmer Newspaper.

Michael LaFrance told the story of the early days of the Star Theater, its impact upon the community, and its participation in fund-raising efforts for War Bond sales. 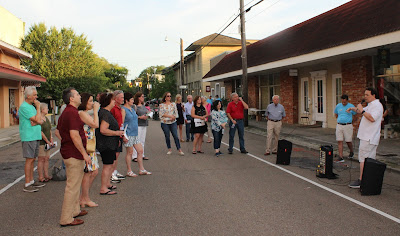 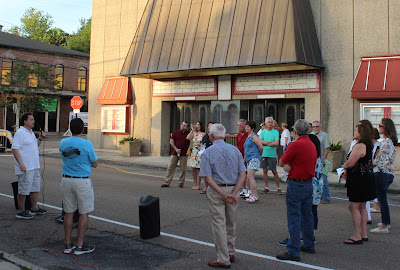 His talk included a visit inside the 77 year old building. 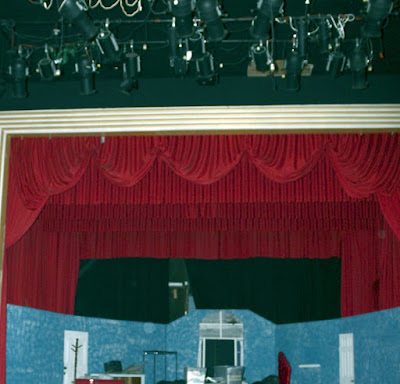 Brenda Willis and Ron Barthet told participants about the history of the St. Tammany Farmer newspaper, as well as the Poole Brothers Livery Stables (and Undertaking & Embalming Service) building that preceded the paper in that location. 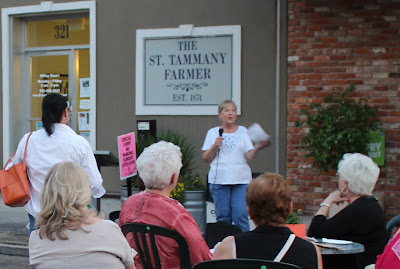 Ms. Willis told about the local people who would come to visit the newspaper office, the politicians, the community leaders, and others, and she recounted what happened after the 1997 Covington tornado. "We looked out the door and all the windows in the courthouse across the street had been blown out," she said.  Brenda then took the group inside for a brief tour of the newspaper office. 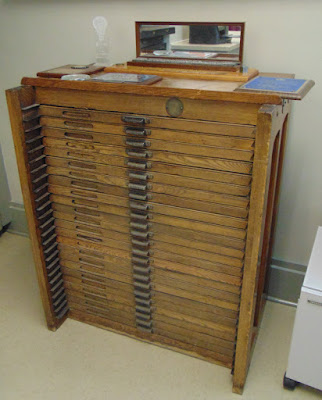 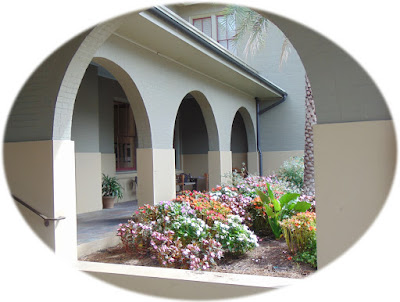 At the Southern Hotel, General Manager Miro Lago told the group about the history of the 112 year old building, including the time Governor Earl Long designated it as the "state capitol" following his lunacy hearing at the Covington Middle School gymnasium.

Over at the old Old Boston St. Courthouse, now being used as the parish's Emergency Operations Center, Director of Homeland Security Dexter Accardo, below, explained how the building was being used in times of hurricanes and other emergency situations.

Key personnel from a wide variety of public and private agencies are represented in the communications center during an emergency. 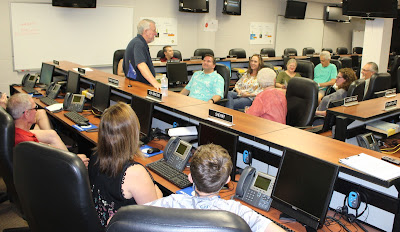 He told how St. Tammany Parish and particularly his department was commended for its plan for handling the threat of Hurricane Katrina. Having a plan and modern communications helped the parish recover from the damage as quickly as possible, he said. 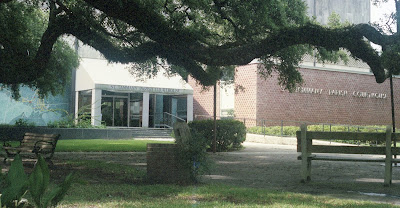 Accardo has been director for 15 years and praised the use of the old courthouse for emergency purposes because of its solid construction. Part of the operation has moved over to an administrative facility on Tyler Street near Champagne Beverage, however.

"We do a lot of training in emergency management," he said.

The tour stayed on the ground floor, but Accardo did mention that on the mezzanine level there were bunk rooms for rest breaks for the various personnel who work around the clock during an emergency situation.

An important part of the operations during an emergency situation is to receive calls for help as they come in, record them, distribute them to the agencies that can do something about them, but most importantly, keep track of them to make sure they were handled.

"During a hurricane we can't send electrical crews out in the middle of the storm to fix something, but we have to have a system that will keep track of all these things and address them as soon as conditions allow," he explained.

The system allows for  accurate computerized record-keeping as well, which helps in after assessments and reports.

What is the number one type of call that comes into the communications center during a hurricane? "It's phone calls from people outside the area checking on the welfare of people within the affected area, their families," he said. "We had thousands of calls asking to check on their friends and relatives."

"People are under stress, first responders can't get to them in time, because of the weather conditions, and heart attacks wind up being the number two killer," he went on to say.

He commended the faith-based communities for providing the assistance needed throughout their neighborhoods were there to help in any way they could.
St. Tammany did well in recovering from Katrina because of its "operational plan" that was in place before the storm, and that plan had to be doubled and tripled to meet the challenges that were presented by that particular hurricane, he said.

Here is the text from a Farmer newspaper article published in June of 2003:

After being the center for justice for more than four decades, the St. Tammany Parish Courthouse in downtown Covington will now be fitted for a new purpose.

Dedicated in 1960, the modern building, with its graceful oak trees and signature mosaic map of the parish, is a landmark in the parish seat. When plans for the new Justice Center were first announced, many local residents feared the building would be abandoned.

The city of Covington considered swapping City Hall for the old courthouse, but decided it would not be financially prudent at this time.

Concerns were allayed when it was announced that parish officials had decided to renovate the 44-year-old structure to house the command post for the Office of Emergency Prepared­ness and the 911 emergency dispatch center, which is overseen by Parish Communications District No. 1.

Parish President Kevin Davis said the parish is exploring locating other offices in the 36,120-square-foot courthouse. He mentioned the parish's Hazard Mitigation Office, which works to elevate homes in flood-prone areas, could move from its current location on Koop Drive.

The 911 administrative, officers are currently located in the Slidell Towers Building. The communications district had been planning to spend between $1.7 and $2 million to build a head­quarters and emergency command post next to the parish jail in northern Covington. That money will now be used to renovate and equip the courthouse, said officials.

The main second-story courtroom will house the dispatching center for 911. Dispatchers from the sheriff's department and fire districts are also expected to utilize the courthouse space.

The OEP headquarters, which cranks into high gear during hurricanes and other potential disasters, will be located on the ground floor of the courthouse. The OEP had been located tem­porarily in the parish jail. Preliminary plans also call for the cour­thouse annex, which had been occupied by the sheriff's tax office, to be converted into a kitchen and dormitory area for emergency workers.

Richard McCloskey, construction manager for Lambert Con-. sultants, has drawn up preliminary plans based on notes from parish officials during a recent walk-through of the structure, he said.

He said the parish wants to move quickly on the renovations, but he does not know when he will have finalized plans ready.

In addition to the inside renovations, McCloskey said he was looking at "opening up" the area in the front of the building which includes oak trees and a Veterans Memorial.
"When you look at that area now it is a very divided space," he said. "We want to make it more unified and more friendly for visitors."

He said there were no plans to remove any of the trees or the memorial from the plaza.
The parish reclaimed the courthouse after it was declared sur­plus property in November.

The Southern Hotel, which served as the Parish Administra­tive Complex, was also declared surplus property. The parish has put the 37,778-square-foot building up for public bid, which will be opened-on July 7. The historic old building was recently appraised at $1.2 million.
The courthouse has been appraised at $1 million.

Jimmy Laurent, building committee chair for the Communica­tions District, said the offer to move into the courthouse was too good to pass up.

"The reason we decided to jump ship to the courthouse is they were offering us 32,000 square feet of space," he said. "That's more than twice the space for less money. We'll get more bang for the buck."

When the city of Covington was considering spending money to renovate the courthouse, the most frequently mentioned figure for the job was $1.5 million. "We should be able to do better than that," said Laurent.