These photos show the old White Kitchen restaurant on Hwy. 90 east of Slidell. 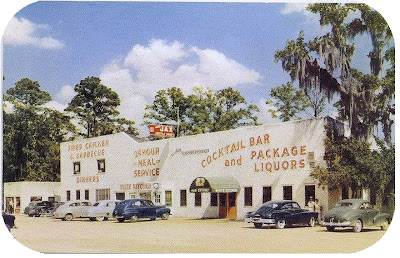 And here is a photo of the White Kitchen location on Hwy. 11 in Slidell

White Kitchen, Front Street, Slidell, LA 1957
The White Kitchen was established in 1922. In the late 1940's it offered air conditioning, a cocktail bar, and "Back to the Farm" fried chicken dinners, with all the chickens raised on the White Kitchen Farms near Slidell. A postcard described its motto as "Where New Orleans Cooking and Mixed Drinks Begin."
The White Kitchen Restaurants became a well-known motorist resting place, known for their "excellent food and drinks." Many area residents and travelers would head for the "sign of the Kneeling Indian" to meet with friends, enjoy a meal, or just use the rest rooms on the way from New Orleans to the Mississippi Gulf Coast. 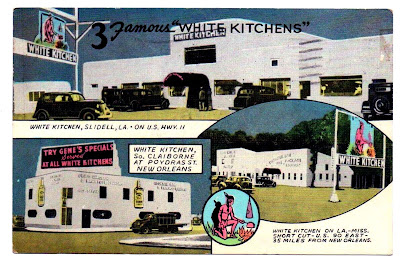 A 1930's advertisement talked about "a pleasant drive across one or more of the FREE bridges across beautiful Lake Pontchartrain on either U.S. Highway 11 or 190 brings you to the healthy and invigorating Ozone belt of St. Tammany parish. Here one can find two excellent restaurants for that breakfast, lunch or dinner."

"The two White Kitchen restaurants have long served the residents of Southern Louisiana and travelers," the advertisement went on to say. "The original White Kitchen (on Front Street) was established in 1926," shortly after the road was built from the town of Pearl River across the swamp to Santa Rosa, Mississippi, providing road access to the Mississippi Gulf Coast from New Orleans. Up until then, car traffic had to take ferries across the Rigolets and up the Pearl River to Pearlington.

The restaurant proved popular from the very beginning. "Although it specializes in barbecued meats, it also offers an excellent selection of other foods," the advertisement continued.

Because of popular response to the original restaurant, the management decided to establish another. In 1935 The Short Cut While Kitchen opened for business at the junction of Hwys. 90 and 190. (The Short Cut highway from the Rigolets through Honey Island Swamp to Pearlington was completed in 1933.) An annex to the restaurant was added, specializing in steak, chicken and sea­food, the ad noted.

"Both restaurants offer 24-hour service, so stop at the sign of the kneeling Indian: it's the sign of good food and excellent service," according to the advertisement.

Also, it explained that the management of the White Kitchens also operated North Shore Beach. "During late spring, summer and early fall the excellent facilities of the beach are available to family groups and organizations," the advertisement stated. 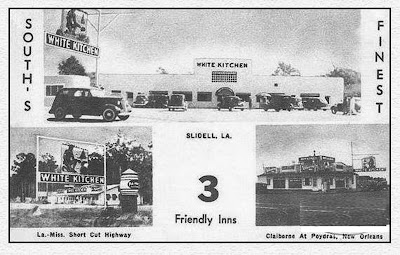 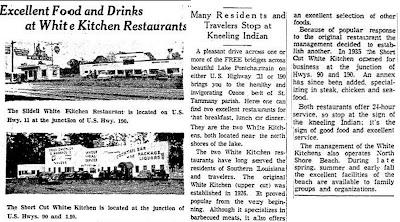 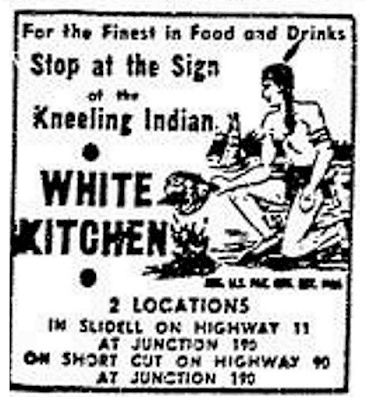 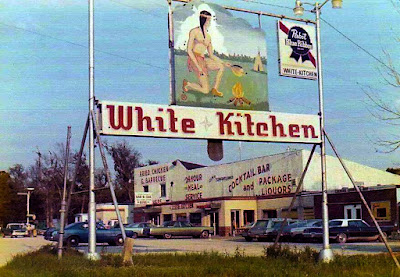