William Kiermaier of Covington is "world" famous. His work reaches around the "globe." That is because he builds world globes, big spherical geographic masterpieces that have been popular with courthouses, libraries and now, the St. Tammany Children's Museum. 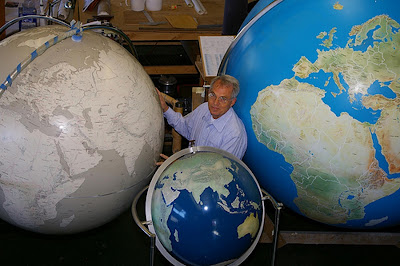 Over the past 25 years, he has built around 15 globes of varying sizes. He had a globe-making shop in Covington, located in a former tire store (the building next to the old Pasquale's Pizza place). 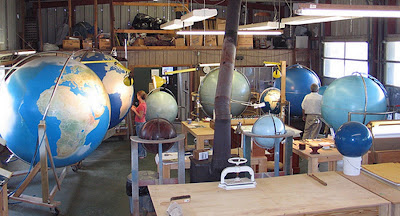 Above is a photograph that shows Kiermaier World Globes in various stages of the manufacturing process. They come in sizes ranging from 18, 24, and 36 inches diameter through 54 inches diameter up to a maximum of 72 inches.

The six-foot in diameter globe he is now working on at the Koop Drive children's educational facility promises to help local children see the world in a whole new perspective. "I hope the children looking at the globe come to realize how small the world is," he said. "They need to see how finite and fragile it is. That's the main thing." 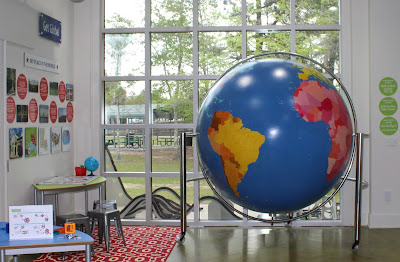 Before building globes, he had a woodworking shop in Covington for 31 years, working out of the big blue warehouse building at the corner of Columbia and Rutland Streets. He left his native state of Colorado because of his love of sailboats and has lived in Madisonville, Mandeville and Folsom.

A master woodworker who has created a wide variety of custom-built wood projects, Kiermaier is self-taught in the field of globe-making, mainly because when he first decided to make one, nobody was teaching that long-lost art. 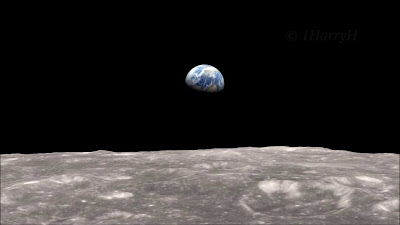 He started making world globes shortly after he saw the NASA photograph of the earth rising above the horizon of the lunar landscape, a famous picture taken by one of the Apollo astronauts back in the 1970's. "It showed a big blue marble, beautiful and fragile,“ Kiermaier said. "When I first saw it I was struck by how small the world had become, and how frail it appeared."

Helping others to look upon the planet in the same way started his quest to learn how to make world globes. An even more intense motivation occurred when he saw a geography teacher pictured on the cover of Time Magazine.

Geography is an important subject for children to understand because of the relationships between people and countries, Keirmaier feels, but flat maps do not truly tell the story. "The teacher in the  Time article was holding a flat map that used the Mercator projection, and that map-making method can give kids the wrong impression," he said. "Kids go around thinking that Greenland is bigger than South America." On a flat map the relations between continents is wrong, Kiermaier stated. 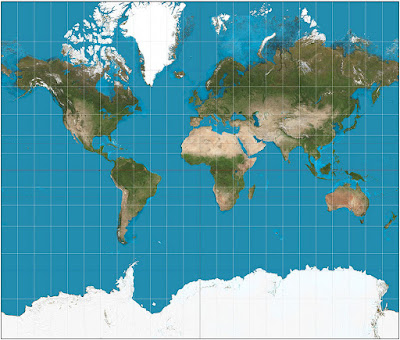 Wrong. Antarctica is big, but not that big.
For an informative video, CLICK HERE.

South America is seven times larger than Greenland, but most people don't realize the distortion on a flat map.  That is why a globe better presents the size and relationships between continents and countries. "Globes are important," he feels, because they not only show land masses in the correct proportions, but they also illustrate the relationships between land and water. From a political standpoint, they offer a 'snapshot in time' showing which countries are where.

While he has slowed down in making them, he is now renovating a globe he made twenty years ago for a couple in Covington who, in 2008,  donated it to the Children's Museum of St. Tammany. Because the museum had not yet been built, the globe was temporarily put into storage at the St. Tammany Justice Center. In March of 2014, with the help of several people, the globe was moved from the Justice Center to a workshop where Kiermaier began the meticulous restoration. 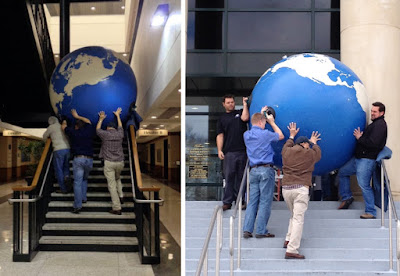 That move required the use of large suction cups and quite a bit of man-power to maneuver the globe as it was transported from the second floor of the Justice Center, down the stairs and across the security station.  Windows were temporarily removed and replaced to accommodate the six-foot sphere.

The globe was then carried on a large trailer through downtown Covington with many people stopping to stare at the planet in motion. During the move and while in storage, the globe suffered some damage, so the restoration project, which was sponsored by Andy Elliott, owner of CheckPoint Pumps & Systems and Children's Museum Advisory Board Member, patched up the small dents and scratches.

It remained in Kiermaier's renovation warehouse until a suitable building was made available for the Children's Museum. That building, located just west of Tammany Trace on Koop Drive, opened its doors on January 20th of this year. 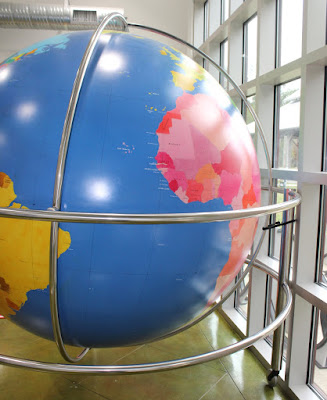 Designing and building a stand for the big globe was a major project in itself. The stainless steel stand had to allow for the 125 lb. globe to turn and twist in a variety of directions so the various parts of the globe could be brought into view. "I had to figure out how to make that possible, and one night I woke up and I had the whole design in my brain. I said 'wow, that's it.'," he explained. The stand design works well because of its usefulness and functionality.

Once they looked over the production studio, they gave him the order. As a result, a Kiermaier globe now sits in the reading room of the Library of Congress cartographic section. Mounted in its stainless steel, fully articulating, mobile mount, that globe is a 54 inch model that serves as a “work” globe for congressmen and staffers. 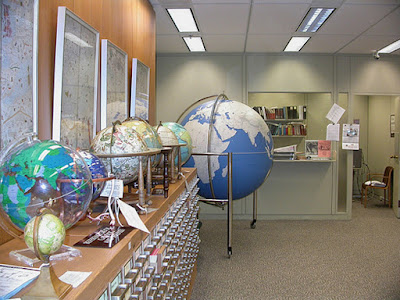 According to the Library of Congress website, the hand-painted, hand-lettered globe shows the earth's major geographical features, major cities and political boundaries (current as of April 2006). It was a welcome addition to the globe collection of the Geography and Map Division (G&M).

In a press release on the Library of Congress website, Map Division Chief John Herbert said, "An independent globe maker, Bill Kiermaier of Covington, La., created this one-of-a-kind globe especially for G&M." The advantage of so large a globe, Hébert said, is that it shows the curvature of the Earth and gives the viewer a realistic perspective of distances and directions that are not so readily apparent on flat maps.

The Library of Congress globe was his "favorite one," Keirmaier said, one that took a lot of planning and effort to get it into place through a few doors that weren't much wider than the diameter of the sphere.

His first globes were hollow wooden spheres. He would make them by first cutting out the radius of the various staves needed, then setting up a jig that would insure that all of them were uniform in shape and size.

Cutting and gluing the staves together called for extreme precision, because being 1/32 inch off at one end could cause a three-inch gap on the other end of the piece. "That's how perfect they had to be," he commented.

He would use a special saw to taper the pieces precisely where they would fit together into a hemisphere, gluing the edges and sanding the joints. Bringing two hemispheres together made a complete globe. Over the past 25 years, building globes has gotten easier, due to the improved materials, design work, and fine-tuned procedures, he said.

While the wood globes are incredibly strong, over the years the wood can suffer problems such as cracking, and that is why he turned to fiberglass. He made a mold from the wooden ones, and that became a way to easily shape and produce the lighter and more durable fiberglass globes. Some of his globes come apart at the equator where aluminum rings fit together and lock into place.

The Children's Museum globe was one of his first attempts at a big fiberglass globe, and it was almost too big. "I think I was crazy trying to make one 72 inches," he laughed. 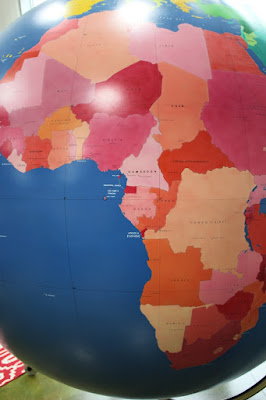 Once the globe shape is manufactured, then comes the task of creating the graphics on its surface. First the entire globe is painted a primary color, often blue to represent the oceans. Then a variety of "masks" are applied that allow the tracing of the various countries around the globe. The process is "unbelievably tedious," he said.

The level of detail on a 72 inch globe in regards to the boundary lines between continents and countries is quite amazing. Even on the 54 inch globes, the detail is quite impressive. The masks are cut and peeled off bit by bit, and maps of the different countries are painted in one by one. He uses a variety of kinds of maps to create the finished surface, hydrological maps, topographic maps, and, of course, political maps. He has even painted in relief to indicate mountains and valleys.

He likes to point out that even while looking at a large 72 inch globe, the relative elevation of mountain peaks would still be extremely small, about a sixteenth of an inch from the surface. And, the thickness of the atmosphere at that scale is still less than half an inch. 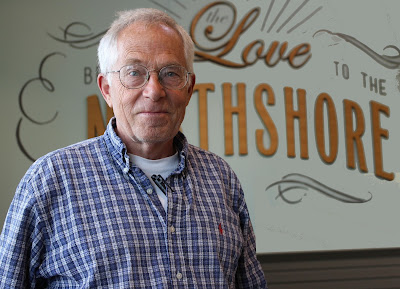 "I could spend the rest of my life making globes," he said, "but they are so expensive to make it would be helpful to have some kind of financial backer." He feels that every major airport should have a large-scale globe for travelers to look at while waiting for their plane.

In regard to those who view his globe at the Children's Museum, he says, "For me the whole point of globe making is to disseminate information about the fragility of our planet, and, to create understanding that the global culture is in a constant political, economic and environmental flux. Technology continuously shrinks our world and makes its imprint on our environment; I believe that large world globes afford a much better understanding of these relationships than any flat map could," he said.

He feels that employing the physical three-dimensional craftsmanship that results in a map on a sphere is really the only way to truly appreciate the size and locations of continents. 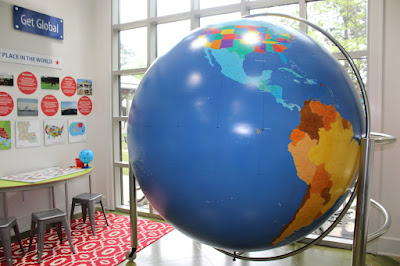 "We need to be aware that we’re all the same, that we all live on one little planet, and that it is all we have. We’re all in the same boat, so to speak, and each of us needs to take better care of it," he explained.

When environmental problems begin to overwhelm inhabitants of planet Earth, there won't be an easy escape to other planets as so many young people today tend to think, Kiermaier said. "They have all grown up viewing Star Trek TV shows, Star Wars movies, and science fiction space stories about living on other planets, but I don't think they realize what that would really involve. Mars is a long ways off." 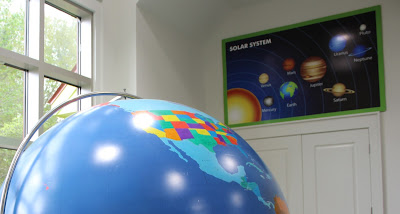 "We really need to take care of the planet we're on, and I hope that my globes help bring about that realization," he concluded. 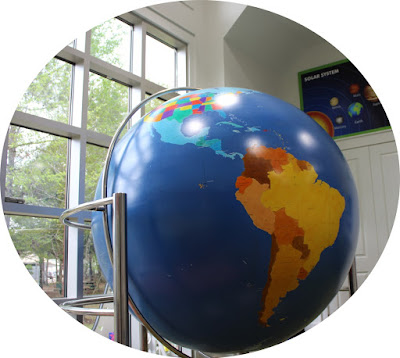