The new Southeast Louisiana District Livestock Showbarn was dedicated during ceremonies held in March of 1976 near the conclusion of the 41st annual district livestock show held at the parish fairgrounds in Covington.

The event brought participants and their show animals from 21 parishes across southeast Louisiana. The article about the dedication ceremonies and the activities at the livestock show is located below. 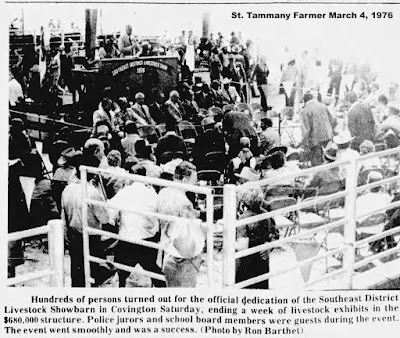 Barn Is Dedicated at Livestock Show

COVINGTON, La. -- City, State and LSU Extension Service officials spoke Saturday during dedication ceremonies of the $680,000 Southeast Louisiana District Livestock Show Barn here just before the conclusion of the 41st annual district show and the Sale of Cham­pions. Some 21 parishes are represented in the South­east District.

Jesse B. Holder, president of the show, was present­ed with a plaque by Dr. John A. Cox, director of the LSU Extension Service, making him an honorary Coun­ty Agent. Ruth Reames, 15-year-old daughter of Mr. and Mrs. Eddie H. Reames of St. Francisville and member of the West Feliciana 4-H-club took the top honor of the dis­trict show as she exhibited the Grand Champion steer. The 1,052 pounder, purchased by the Reames' last October from the Granite Hill Hereford Ranch in Llano, Texas for $250 was sold during the Sale of Cham­pions to Gene Thompson and James Ganus of Smiley's Meat Market and the. A & G Cafeteria of New Orleans for $1,630.60 or $1.65 per pound.

The Show Queen, Laurie Simonson of the St. Tamma­ny 4-H Club, captured the Reserve Champion ribbon with her 1,243 pound Exotic breed animal. Miss Simon­son is a 17-year-old Covington High School student who  has been exhibiting animals in parish and district shows for some seven years. Her winning entry was purchased last Easter in a Club sale in Alexandria, Louisiana. She is the daughter of Mr. and Mrs. Fred Simonson, who have seven other children, with six hav­ing been involved in exhibiting of animals in shows.

Miss Simonson's reserve champion was purchased by Gene Thompson of Thompson Packing Co. Inc of New Orleans and Louisiana By-products Inc. of Living­ston, La- represented by Felix Sapp. The price was $1,615.90 or $1-30 per pound.

Kim Core of the St. Tammany 4-H Club was the big money winner as her grand champion market Iamb brought her $706-25 or $6-25 per pound. It was pur­chased by Walter Verlander of the Farm Credit Bank of New Orleans and the animal weighed 113 pounds. The Grand Champion last year weighed 100 pounds and brought only $3.75 per pound.
Alcus Stewart of Stewart's Dairy of Bogalusa pur­chased the reserve champion lamb of Renee Vicello of East Baton Rouge for $393.25. Stewart said the 121 pound lamb would be donated to the Washington-St. Tammany Charity Hospital.

Matt Sampson's 194 pound Grand Champion Barrow was purchased by Jerry Bunch of the Feliciana Meat Co- of Clinton, La- for $626.85 or $3.15 per pound. Matt was a member of the East Feliciana 4-H Club.

Commissioner of Agriculture Dave Pearce pur­chased the reserve barrow champion exhibited by De­  nise Fletcher of the St. Tammany 4-H Club. Pearce purchased the animal for $1-65 per pound or $300.70 on behalf of the employees of the Louisiana Agricultural Department.

Serving as the auctioneer for the sale was Marvin Henderson of Livingston, Louisiana.

The final judging of the show included: 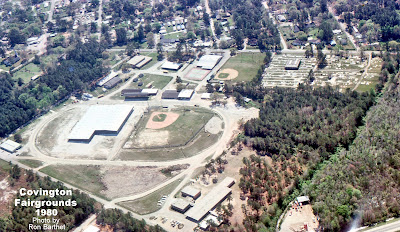 The new showbarn, at left, on the parish fairgrounds in Covington

https://tammanyfamily.blogspot.com/2017/10/bobby-fletcher-sr.html
Posted by Ron L Barthet at 6:00 AM